The Omicron subvariants known as BA.4 and BA.5 now represent 13 percent of new coronavirus cases in the United States, up from 7.5 percent a week ago and 1 percent in early May, according to new estimates from the Centers for Disease Control and Prevention.

The spread of the subvariants adds more uncertainty to the trajectory of the pandemic in the United States, where current case counts are likely to be a significant underestimate. But whether it leads to a major new wave of infections, or spikes in hospitalizations and deaths, remains unclear, scientists cautioned.

The new figures, which were released on Tuesday, are based on modeling, and the C.D.C.’s estimates have missed the mark before. But the overall trend suggests that BA.4 and BA.5 could outcompete the two other Omicron subvariants, BA.2 and BA.2.12.1, which together account for most U.S. cases, said Denis Nash, an epidemiologist at the CUNY Graduate School of Public Health & Health Policy.

Data on BA.4 and BA.5, which were first detected in South Africa in early 2022, remain limited. But these variants seem to spread more quickly than earlier versions of Omicron, such as BA.2, and may be better at dodging the immune system’s defenses. So far, there is not much evidence that they cause more severe disease, although more studies are needed.

“How analogous is that for us?” he said. “I think it’s possible that we could see another wave” fueled by BA.4 and BA.5. But, if the United States follows South Africa’s example — which is not a guarantee — the wave might be more modest than previous surges and cause less pronounced increases in hospitalizations and deaths, he said. 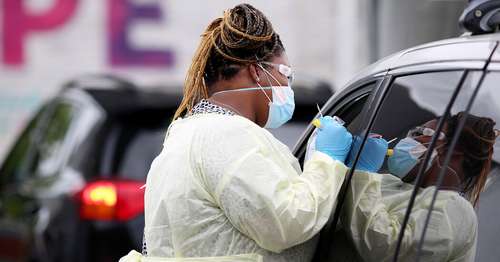 Over the last few weeks, the United States has been averaging roughly 100,000 new cases a day, according to a New York Times database, up from less than 30,000 in late March.

And while hospitalizations have begun to decline in the Northeast, they are rising elsewhere. Trends in the number of new deaths, which have fluctuated between about 250 and 400 a day over the last month, are less clear, though the metric is averaging much lower than during the winter Omicron surge. (Data reporting delays around the Memorial Day holiday make recent statistics less reliable.)

Globally, the most recent data suggest that BA.4 and BA.5 still represent a relatively small share of cases, but that could change in the weeks ahead. In a recent report, the U.K. Health Security Agency noted that in many countries, the two subvariants were replacing BA.2 about as quickly as BA.2 replaced the original version of Omicron.

The subvariants have become especially common in parts of the southern United States. In the region comprising Arkansas, Louisiana, New Mexico, Oklahoma and Texas, BA.4 and BA.5 account for more than one in five infections, according to the new figures.

Wastewater data also highlight the spread of the subvariants. In Missouri in early May, for instance, BA.4 and BA.5 showed up in a small number of the state’s sewersheds, or geographic areas in which the wastewater feeds into a single treatment plant or other collection point. The subvariants are now detectable in more than half of them, said Marc Johnson, a virologist at the University of Missouri who has been analyzing the state’s wastewater.

Preliminary evidence from laboratory research suggests that unvaccinated people who were infected with the original version of Omicron, known as BA.1, might be easily reinfected by BA.4 or BA.5. (Vaccinated people are likely to fare somewhat better, the study suggests.)

This immune evasiveness, in addition to the natural waning of protection against infection over time, could explain why the newest subvariants have been able to spread so quickly.