Negative emotions can reduce the ability to trust others, even when these emotions were triggered by events that have nothing to do with the decision to trust.

It is no secret that feelings toward a specific person can influence your interaction and trust levels — for example, if a friend says your new haircut is terrible and then asks to borrow your car, you will probably be less likely to say yes.

But what happens when your negative feelings are triggered by events that have nothing to do with the person? For instance, your boss yells at you today and then your friend calls and asks to borrow something of value.

In the field of psychology, these emotions are called “incidental,” because they were triggered by events that are unrelated to our currently ongoing social interactions. It has been shown that incidental emotions frequently occur in our day-to-day interactions with others, although we might not be fully aware of them.

To create a prolonged state of negative affect (emotions), the team used the well-established threat-of-shock method, in which participants are threatened with (but only sometimes given) an unpleasant electrical shock. This threat has been shown to reliably induce anticipatory anxiety. 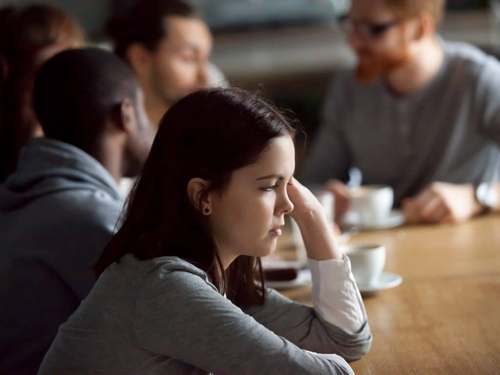 Meanwhile, participants played a trust game, which involved decisions about how much money they wanted to invest in a stranger (with the stranger having the option to repay in kind, or keep all the invested money to themselves). Indeed, the participants trusted significantly less when they were anxious about being shocked, even though the threat was unrelated to their decision to trust.

During this time, the participants’ brain responses were recorded using functional Magnetic Resonance Imaging (MRI). These images revealed that a brain region widely implicated in understanding others’ beliefs — the temporoparietal junction (TPJ) — was significantly suppressed during trust decisions when participants felt threatened, but not when they felt safe.

The connectivity between the TPJ and the amygdala was also significantly suppressed by these negative emotions.

However, under safe conditions, the strength of the connectivity between the TPJ and other important social cognition regions, such as the posterior superior temporal sulcus and the dorsomedial prefrontal cortex, predicted how much participants trusted others. This association between brain activity and behavior was neutralized when participants felt anxious.

“These results show that negative emotions can significantly impact our social interactions, and specifically how much we trust others,” said authors Engelmann and Ruff.

According to Engelmann, the findings reveal that negative emotions can have important consequences on how we approach social interactions.

“In light of recent political events in the U.K. and the forthcoming elections for the European Parliament, the results also contain a warning: Negative emotions, even if they are incidental, may distort how we make important social decisions, including voting.”

Job Stress and also Trouble Sleeping Can Be Toxic Combination