Staff at the trust confirmed there were a total of 30 patients being treated in the hospital on Thursday, up from 25 on Wednesday after four new admissions and one patient already in hospital testing positive for Covid-19.

The number of patients in hospital with Coronavirus in Bolton has increased to 30, rising by 5 in 24 hours, The Independent has learned.

Bosses at the Bolton NHS Foundation Trust are opening an extra ward for Covid positive patients today, as a previous ward has become full.

There are seven patients in intensive care or high dependency, with 27 patients on oxygen.

Typically, patients admitted now for Covid-19 were likely to be have been infected 2 to 3 weeks ago, suggesting numbers could rise further.

The number of Covid patients in the trust has risen steadily over the past three weeks, doubling in two weeks, from 15 on 6 May.

One clinician at the Bolton hospital told The Independent that despite a number of patients being discharged in recent days, the overall number in hospital was rising daily.

They said the additional “escalation” ward was being opened to relieve pressure in A&E. The trust was previously “cohorting” Covid patients together on one ward.

Another trust source said there were plans in place to seek help from neighbouring trust once the numbers in critical care approached 18.

Despite the increase the number of admissions are relatively small but are being closely watched by ministers and public health experts to see what level of protection vaccination rates provide.

Recent papers from the government’s Scientific Advisory Group for Emergencies (Sage), warned there were still enough unvaccinated people in the country that if the Indian variant was able to spread widely, it could deliver a peak in hospital admissions that was equal to or even larger than those seen previously.

At a Downing Street press conference yesterday Professor Jonathan Van-Tam said the UK was in a “straight race” between the Indian variant spread and efforts to vaccinate the population.

NHS England has opened up vaccinations to people aged 34 and 35 on Thursday with almost 37 million people now having had at least one dose of vaccine against Covid-19.

Yesterday, Public Health England said 158 local authorities were on its watchlist for cases of Coronavirus trending upwards between 6 and 12 May.

Prof Andrew Hayward, an expert in infectious disease at University College London and who advises the government, said he was “very concerned” about the spread of the B1.617.2 Indian variant.

Asked if the UK could be at the start of a third wave in infections due to the variant, which was first identified in India, he said: “I think so”.

“Obviously we’re doing everything we can to contain the spread of that but it’s likely that more generalised measures may start to be needed to control it,” Prof Hayward, a member of the Scientific Advisory Group for Emergencies (Sage), said.

The infectious disease expert said he believed that it would become more clear over the next week or two how much local outbreaks of the variant are spreading throughout the population. 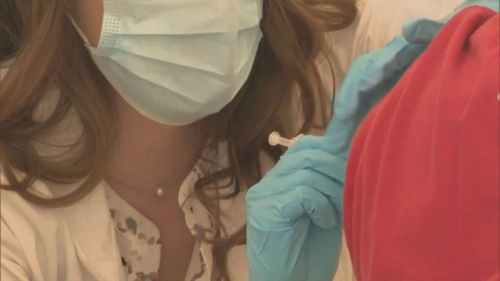