Although cases looked to have risen, overall rates stayed low, the ONS said, and there is no evidence yet to suggest that the India variant is causing a spike in hospital admissions or that it evades vaccines.

Covid-19 cases appeared to rise in the UK last week but overall infection levels remained at a low level, according to the latest official data.

The percentage of people testing positive in England showed “early signs of a potential increase”, the Office for National Statistics (ONS) said on Friday.

It comes amid concern that a Covid variant, first detected in India, could be driving a rise in infections.

The prime minister, Boris Johnson, on Friday said he was “still seeing nothing in the data” to suggest that England needed to deviate from its roadmap of removing all restrictions by 21 June.

More than 60,000 infections were reported in a single day in England at the height of the second wave on 8 January, official figures show.

The picture for the whole UK was “mixed”, with data showing that cases “remained low” in Wales and decreasing in Scotland, while trends are “uncertain” in Northern Ireland.

But although cases are falling in much of Scotland, they are rising in Glasgow, first minister Nicola Sturgeon said.

She added she was “fairly certain” the increase in cases in the city was due to the India variant.

While most cases of the variant in England were concentrated in the northwest and London, PHE said on Thursday it was seeing “clusters of cases” across the country.

PHE said it was also investigating another new variant which has caused 49 infections, mostly in the Yorkshire and the Humber region.

Concern has been building in recent weeks over the India variant, as cases have more than doubled in England over the past week.

A member of the government’s Scientific Advisory Group for Emergencies (Sage) warned on Thursday that the UK could be experiencing the start of a third wave of the pandemic.

But the latest ONS data did not show for certain that overall infection levels are rising, said Sarah Crofts, head of analytical outputs for the agency’s Covid-19 Infection Survey.

“This week there is a mixed picture of infection levels across the UK. Although we have seen an early indication of a potential increase in England, rates remain low and it is too soon to say if this is the start of a trend,” said Ms Crofts.

“When rates are low they can change direction more easily, so it is crucial that we continue to monitor infection rates as restrictions are lifted and people are able to socialise more widely.”

On a visit to Portsmouth on Friday, Mr Johnson said he is increasingly hopeful that all coronavirus restrictions can be lifted on 21 June as planned.

“We will be letting everybody know exactly what sort of arrangements to expect for 21 June,” he said.

Volunteers needed for trial of new Covid vaccine in Scotland 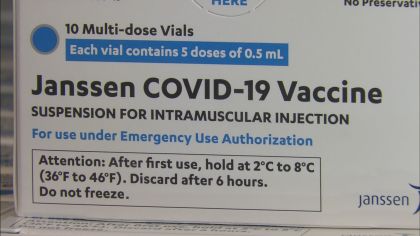 Public Health Clears Use Of Johnson & Johnson Vaccine After Some Experience