Helena McKeown, chair of the BMA representative body, told The Independent the situation is not improving due to a lack of action from the government as she warned there is a dearth of different sized PPE for a range of body shapes available.

Exclusive data from the British Medical Association, which polled over 7,000 UK healthcare workers, found a fifth of female doctors were not at all confident their PPE is “fully fit-tested” or adjusted to tally with their requirements. Just 13 per cent of men said the same.

The professional organisation for doctors argues PPE is generally designed to fit the “size and shape of male bodies” even though women make up 75 per cent of NHS workers.

“We’ve had the pandemic a year and we know a one size fits all approach does not work. Whether that is for the size of the gown, clothes or fit of the face mask. We have had a year to get this right.”

She noted she was 5 ft 8 which is “pretty much the average size of a man”, but added that many of her female colleagues are shorter in height and often have smaller faces as well. 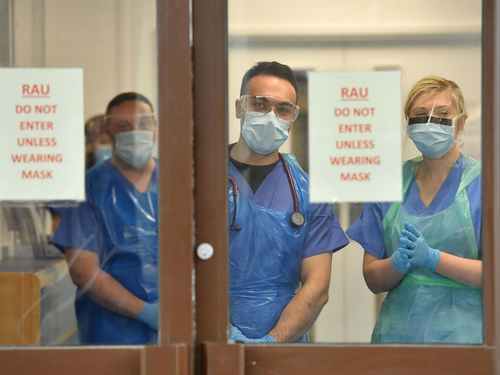 Dr McKeown added: “They can look drowned in some PPE. Sores are exacerbated by wrongly sized PPE. My face is sore but if the PPE was poorly fitting, it would be worse. We can see sores, eczema, skin infections and ulcers after a health professional has worn wrongly sized PPE.”

Dr McKeown said health professionals were especially anxious about ill-fitting PPE due to the unknown infectiousness of the new strain of the virus.

“It is worrying because I want doctors and surgeons to have 100 per cent focus on the patient in front of them and not be worrying about their own health and risk,” the BMA official added.

“And when they are at home, I want them to be getting a good nights sleep rather than worrying. We know doctors making decisions under stress are going to be finding those decisions more difficult.”

Birte Harlev-Lam, executive director for Professional Leadership at the Royal College of Midwives, also hit out at the lack of properly sized PPE for women.

Ms Harlev-Lam said: “Personal protective equipment should be just that – personal. Yet we know that the majority of PPE used in healthcare has generally been designed around male Europeans.

“Women account for around 99 percent of the midwifery workforce, so there is a risk that they may not be wearing the most appropriately sized or designed PPE. This isn’t an area where staff should just make do – it’s about their protection, their safety. It’s unacceptable that we have masks that don’t fit black or Asian staff, or gowns and scrubs that don’t fit women’s bodies.”

She argued PPE manufacturers need to properly tackle the issue and said it was “shameful” it has only been placed on the political agenda in the wake of the Covid emergency.

Last spring The Independent reported female NHS staff were being forced to place themselves at risk due to not being able to access correctly-sized protective gear during the Covid-19 crisis.