Professor Wei Shen Lim, chair of the Joint Committee on Vaccination and Immunisation (JCVI), said age “dominates” the approach for the next phase of the mass vaccination programme.

As the Covid vaccine rollout continues to make progress across the UK, government advisers are prepared to recommend that age should be the deciding factor in how to prioritise the next stages of the programme.

It comes amid reports that all over-40s could be offered a coronavirus jab as soon as the next few weeks, with vaccination data showing that the target to vaccinate the top nine priority groups could be hit by 24 March.

In a bid to increase the speed of vaccine deployment, JCVI members suggested widening the age brackets from five years to 10 in the next stage, reported the Mail Online.

Speaking during a webinar hosted by the Royal College of Physicians on Thursday evening, Prof Lim said: “One of the great successes of the programme is the rate of deployment, and this is now the most important factor in the programme.

“Age dominates by a long way, and almost all underlying health conditions contribute some increased risk, but not a huge amount of increased risk,” he added. 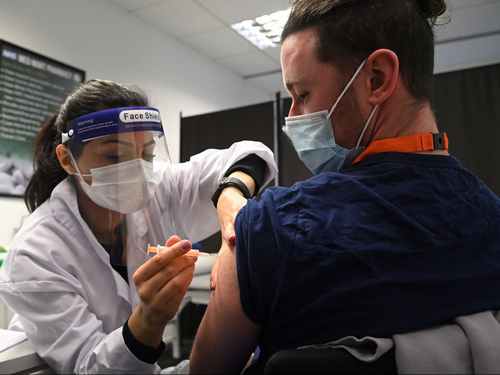 However, the recommendation would be likely to spark backlash from unions representing key workers such as teachers and police, who have argued for weeks they should be prioritised in the vaccine rollout given their close-contact roles.

The NHS has also been increasing efforts to reach out to minority ethnic communities in poorer parts of England, amid analysis by The Independent that found fewer at-risk people were receiving their first dose of Covid vaccine in deprived areas.

But the committee is said to be satisfied that those most at risk within key worker and minority ethnic groups have already been accounted for as many are “clinically vulnerable” or “over 50”, according to the Mail Online.

On Valentine’s Day, Boris Johnson announced that everyone in England in the top four priority groups, including those aged 80 and over, had been offered the vaccine. A spokesperson for the Department of Health said uptake of the vaccine has so far been higher than anticipated.

Prof Lim said: “Rather than focusing too much on sub-prioritisation within certain groups, actually what we really need to do is focus on getting our implementation or deployment right.”

He added that the rollout should be focused on managing health inequalities and improving vaccine take-up among some minority ethnic communities.

Figures published on Thursday show that a total of 16,423,082 people in the UK have now received a first dose of a Covid vaccine, equivalent to 24.6 per cent of the total UK population.