The new regionalised system comes into effect at a minute past midnight on Wednesday, replacing the second England-wide lockdown after winning Commons approval by a margin of 291 votes to 78.

Boris Johnson has bowed to pressure from Tory backbench rebels by promising a localised approach to the planned review of England’s tiered restrictions in the run-up to Christmas.

The prime minister’s pledge held out the prospect of eased controls from 16 December in districts with low levels of Covid-19 which have been placed under tougher tier 2 or 3 restrictions because of higher incidence in their surrounding regions.

But Mr Johnson was able to press ahead only because of Labour and Liberal Democrat abstentions, as a rebellion of 55 Tory MPs left him dependent on opposition votes. And a sunset clause means he must secure MPs’ assent again by the start of February if he wants to keep the restrictions.

The revolt – made up of 53 Tories voting “No” and two more acting as tellers – is the largest since last year’s election and represents a significant blow to the authority of the prime minister, who made a last-minute plea for support in a Zoom call and was then seen at the door to the voting lobby begging his troops to back him. A further 16 Tories broke the whip to abstain.

In a six-hour debate which saw Tory MPs’ loyalty stretched to breaking point, a string of backbenchers queued up to protest at the damage the “authoritarian” measures would inflict on businesses in their constituencies. 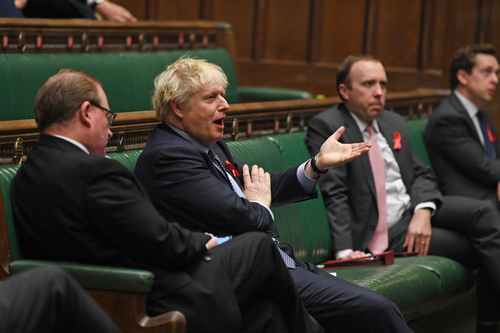 Mr Johnson’s offer of one-off grants worth £1,000 for every “wet pub” unable to open because it does not serve food was dismissed as “small beer” by Labour, while trade groups denounced it as a “meaningless gesture” which would only cover the cost of a single keg of ale.

Under the new restrictions, pubs and restaurants in tier 3 areas, covering 42 per cent of the population, will be restricted to takeaways and deliveries only, while those in tier 2, covering 57 per cent of people, can open only if they are serving drinks with “substantial meals”. Only in the tier 1 areas of Cornwall, the Isle of Wight and the Scilly Isles can drinks be served on their own. Almost 99 per cent of English people will face social restrictions preventing them from meeting family and friends in their homes, with those in tier 3 only able to meet in parks.

There was confusion over the precise details of the regulations, with ministers giving contradictory answers over whether a snack like a scotch egg would count as a meal.

The application of the new rules was denounced as “arbitrary” by the former effective deputy prime minister Damian Green, “draconian” by ex-chief whip Mark Harper and “disproportionate” by former minister Sir Bob Neill.

Greg Clark, a former business secretary, was one of many MPs to complain that his constituency had been wrongly placed in tier 3, arguing that levels of infection in Tunbridge Wells were closer to those in Cornwall than in the rest of Kent.

Announcing that he would vote against the government for the first time in 10 years, former cabinet minister Jeremy Wright said restrictions should be made “as local as you can”, while Maria Miller – also an ex-cabinet member – said tiers should “follow the human geography of this pandemic, not administrative regions”.

Mr Johnson left no doubt that ministers will look at district and borough-level circumstances when they conduct the first fortnightly review of tier levels on 16 December.

Reviews will take a “granular” approach, responding to “the reality of what is happening on the ground for local people, looking at the incidence of the disease, the human geography of the pandemic and the progress areas are making”, the PM promised.

“We will try to be as sensitive as possible to local effort and local achievement in bringing the pandemic under control.”

Matt Hancock, the health secretary, said ministers would use “the most localised geography that is epidemiologically relevant”.

Their comments will give hope to areas like the south and west of Kent, which have relatively low levels of Covid-19 but went from lockdown into tier 3 because of high countywide rates resulting from soaring infections in Medway and Swale on the north coast. In Lincolnshire, the rural area of South Holland may hope to escape tier 3 because its rates are lower than in neighbouring Boston, while Northumberland could push for a reprieve as the least affected part of the tier 3 northeast.

But Labour leader Sir Keir Starmer accused the PM of pretence over the prospect of easing restrictions in some districts before Christmas.

“We need to level,” said Sir Keir. “In my view that is highly unlikely and we might as well face that now. It is obvious that the new tier 1 may slow, but it won’t prevent, a rise in infections and it is far from certain that the new tier 2 will hold the rate of infections.”

Sir Keir warned that the economic package on offer from the government was “nowhere near sufficient to support the communities affected”.

And Sir Charles Walker, vice-chair of the influential backbench Tory 1922 Committee, said that elderly constituents had told him they did not want to see their children’s businesses and futures destroyed to protect them from the virus.  Arguing that “not every death is a tragedy”, Sir Charles told MPs: “A tragedy is when a child dies. A tragedy is when some young woman or young man dies, or when you are cut down in your middle years. But when we say it is a tragedy when someone at 80 or 90 has met their mortality, we diminish that life so well-lived.”

In a final plea to MPs to back the new system, Mr Hancock told the Commons: “The end is in sight. The measures are temporary, time-limited, but they’re no less necessary for that.

“The return of our freedoms is on the horizon, the virus is back under control, the NHS has been protected. Let’s not throw it all away now. We must have resolve not to do what’s easy, but what is right.”

How Covid survival rates have improved

My Donor Saved Me Twice