Germany’s science minister that the same safety standards are being applied in the approval process for coronavirus vaccines as for other drugs and that this would be key to gaining the widest possible public acceptance for Covid immunisation.

Pfizer and its German partner BioNTech have asked the European drugs regulator to authorise the emergency use of their Covid-19 vaccine, paving the way for its anticipated rollout across the continent.

The companies follow Moderna in requesting approval from the European Medicines Agency (EMA), which has been conducting a rolling review of the two-dose vaccine since 6 October.

It’s expected a positive verdict will be delivered next week, allowing supplies of the mRNA vaccine to be administered in Europe over the Christmas period.

The application to the EMA comes after Pfizer and BioNTech applied for US approval on 20 November, taking them a step closer to launching their vaccine.

“We have known since the beginning of this journey that patients are waiting, and we stand ready to ship Covid-19 vaccine doses as soon as potential authorisations will allow us,” Pfizer’s chief executive Albert Bourla said in a statement on Tuesday.

Anja Karliczek told reporters in Berlin that the EMA will be holding a public hearing on 11 December regarding the approval request by BioNTech and Pfizer.

Final analysis of the vaccine, released last month, showed that it is safe and 95 per cent effective in preventing Covid-19.

Pfizer’s phase three trial enrolled more than 40,000 people from across the world. Of these, 42 per cent of participants are from diverse ethnic backgrounds and 41 per cent are aged between 56 and 85 years old.

A good immune response was “consistent across age, gender, race and ethnicity demographics” and the jab was more than 94 per cent effective in those aged over 65, Pfizer said.

Pfizer and BioNTech say there were no serious side effects from the vaccine, though some volunteers reported headaches and fatigue.

There were 10 severe cases of Covid-19 overall, with nine in the placebo group and one in the vaccine group.

Professor Ugur Sahin, the scientist who developed the vaccine, said last month he was “very confident” the jab will also reduce transmission of the disease, perhaps by 50 per cent, resulting in a “dramatic” reduction in cases.

“I’m very confident that transmission between people will be reduced by such a highly effective vaccine – maybe not 90 per cent but maybe 50 per cent. But we should not forget that even that would result in a dramatic reduction of the pandemic spread.”

However, he warned that the arrival of his vaccine “will not mean the situation will dramatically change” by the end of the year.

“This will be a difficult winter,” he told said. “It will become worse before it becomes better.”

The UK government has secured 40 million doses in total of the vaccine, with 10 million due to be delivered to the country by the end of the year if the jab is approved.

Protection is achieved 28 days after the initiation of the vaccination, which consists of two doses, meaning up to five million Britons could be inoculated over the winter period. 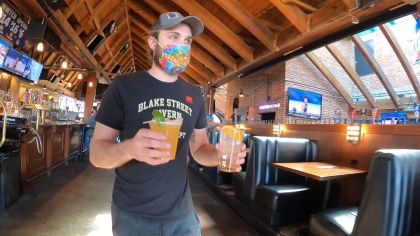