Health officials and local authorities will now begin rapidly administering the two-dose vaccine, described as a “game-changer” by experts, as the government aims to bring the pandemic under control by spring.

After months of waiting and speculation, the Oxford vaccine has finally been approved for use in the UK.

It’s a moment that couldn’t have come sooner, with the NHS once again pushed to the brink following a surge in cases and hospitalisations across the four nations.

What does the data show?

Results taken from the vaccine’s ongoing large-scale trial show that it is safe and it is 70.4 per cent effective in preventing Covid disease.

To date, no cases of hospitalisation or severe disease have yet to be reported among volunteers who received the vaccine.

It is not currently known how long protection from the jab lasts. This will take time and further analysis to determine.

Similarly, it is also unclear whether the vaccine can halt transmission of the virus – though early indications suggest it may have an effect.

When will it be available?

As soon as possible. The government is aiming for 4 January, and is optimistic that more than two million vulnerable people could receive their first dose by mid-January.

Across the four nations, work has been underway to transform football stadiums, conference centres and racecourses into mass vaccination centres. These sites will be crucial for a rapid rollout that will eventually allow up to two million people a week to receive the jab.

Pascal Soriot, chief executive of AstraZeneca, said the manufacturer, on its own, would be able to provide one million doses and beyond per week.

How will it be administered?

People receiving the Oxford vaccine or the one from Pfizer-BioNTech, which was approved earlier this month, will receive their first dose followed by a second dose up to 12 weeks later.

The aim is to give as many people as possible a first dose of a Covid-19 vaccine.

The Department for Health and Social Care said: “Having studied evidence on both the Pfizer-BioNTech and Oxford-AstraZeneca vaccines, the JCVI has advised the priority should be to give as many people in at-risk groups their first dose, rather than providing the required two doses in as short a time as possible.

“Everyone will still receive their second dose and this will be within 12 weeks of their first. The second dose completes the course and is important for longer term protection.

“From today the NHS across the UK will prioritise giving the first dose of the vaccine to those in the most high-risk groups.

“With two vaccines now approved, we will be able to vaccinate a greater number of people who are at highest risk, protecting them from the disease and reducing mortality and hospitalisation.”

How many doses the UK have?

The government has thrown much of its support and financial weight behind the Oxford vaccine, securing a total of 100 million doses – the largest pre-order in its portfolio.

The UK has reached agreements with seven different vaccine manufacturers for a total of 357 million doses.

Approval has already been granted for the Pfizer-BioNTech vaccine, with up to 40 million doses of this candidate set to be delivered by the end of next year.

What are the logistics behind the Oxford vaccine?

Unlike its rivals, the jab can be kept at fridge temperature (2-8C) for long periods of time, meaning authorities aren’t facing the arduous task of storing and transport it in sub-zero conditions.

GP surgeries will be able to keep vials of the vaccine in their fridges, batches can be easily split up and sent into care homes, and there won’t be as much as a rush to get through supplies to prevent them from spoiling. 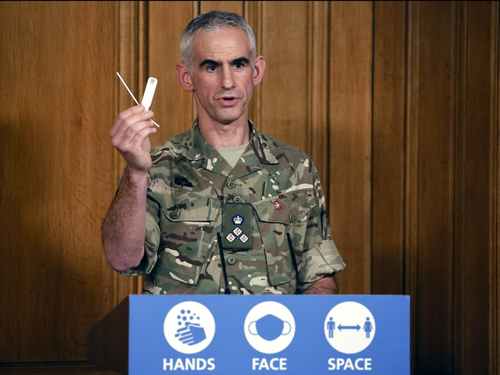 What is a Covid lateral flow test?