In her 3 months of life, nothing has come easy for tiny Ella. When Lyndsy was 5 months pregnant, an ultrasound showed a sacrococcygeal teratoma, a mass on her tailbone. It happens between 1 in 35,000 to 1 in 40,000 live births. The cause is unknown.

“As it grows bigger, it steals the blood away from the baby and feeds the tumor,” said Lyndsy.

A family in Montrose is thrilled to finally have their baby girl home from Children’s Hospital Colorado. Ella Kay Tobler was born 13 weeks early so doctors could remove a rare, 4-pound tumor from her tailbone.

The emergency surgery was done while the baby was still attached to her mother.

“She is a fighter, you know, she’s defied so many odds,” said Lyndsy Tobler, Ella’s mother.

The mother of two from Montrose was referred to the Colorado Fetal Care Center at Children’s Hospital in Aurora.

At 27 weeks, 2-pound 4-ounce Ella would be delivered by an emergency EXIT (ex utero intrapartum treatment) procedure, a special technique similar to a C-section.

But first, the tumor, double the size of the baby, was exposed and surgically removed.

“They started the re-section on the tumor while Ella still was technically inside of me, not born yet,” Lyndsy explained.

When the umbilical cord was cut, the tiny baby needed help breathing. Ella would spend 80 days in the NICU.

“Time in the NICU is a rollercoaster,” said Lyndsy.

But Lyndsy trusted that Ella was in good hands.

“I was dedicated to taking care of her daughter,” said RN Sarah Gadzuk.

She was Ella’s primary nurse, part of a program in which Children’s patients can select their nurses based on mutual rapport.

“It’s just an unsettling time that we’re living in and parents need a bit of additional support then they may normally need,” said Sarah.

Sarah was an advocate for Ella, a friend for Lyndsy.

“It took the edge off the loneliness that’s for sure,” said Lyndsy.

Ella went home to Montrose July 12, 7 days before her due date.

“There was just so many miracles,” said Lyndsy.

And now a full life ahead for this tiny, tough little girl. 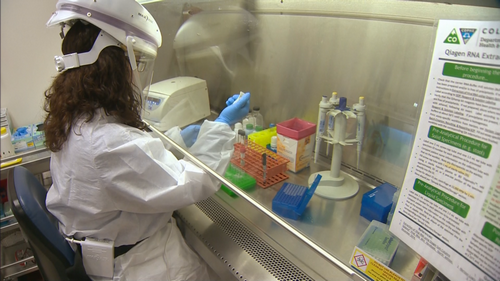