You were discharged from the hospital, the fuss associated with the birth of a new family member has already subsided, life has improved. You joyfully comprehend yourself in the role of a nursing mother, and suddenly! – what happened?

The breast, which yesterday yesterday habitually empty after feeding, has now become hot and hard! Familiar situation? Most likely, this is lactostasis.

Why is this happening?

The female breast, or mammary gland, has a lobed structure. Glandular cells produce milk, it accumulates in lobules and moves along the excretory duct to the nipple during feeding. Each lobule of the mammary gland has its own duct, which can become clogged in its final departments. This is due to curdling of milk, or due to excessive proliferation of epithelial cells, which together with the secretion of the gland form a cork. As a result of this, lactostasis occurs, that is, stagnation of milk.

Most often, this is the problem of primiparous women, in whom the ducts of the breast are narrow and undeveloped. However, mothers “with experience” are not immune from this problem.

In addition to compaction and a local increase in skin temperature, there may be redness of a small area of ​​the chest, swelling, soreness, fever. A white dot may form on the nipple, about 1 mm in diameter, very painful when touched. If you try to express milk, it will be seen that it flows unevenly. It is possible that milk will flow in a trickle from one part of the nipple of one breast, and in drops from another part of the nipple.

In order to never observe the symptoms of lactostasis, you must adhere to the following rules:

What should be done when lactostasis occurs?

Most often, this phenomenon can be encountered on the 4th-5th day after the birth of the baby. At this time, there is an intensive restructuring of the body to a new type of functioning, the “nursing mother” mode is activated. At this time, milk production significantly exceeds the needs of the newborn. Usually, from the 3rd to the 5th day of the postpartum period, it is recommended to limit the intake of fluid to 1 liter per day so as not to provoke lactostasis, and express milk with its excessive production.

However, the situation associated with obstruction of the duct and lactostasis can occur at any period of feeding. Be sure to inform your doctor if symptoms of lactostasis are accompanied by fever. This is due to the fact that stagnant milk is absorbed into the blood. In this case, the doctor may additionally recommend taking paracetamol, which will relieve pain and spasm of the duct, normalizes body temperature.

The main thing is to prevent the transition of lactostasis to non-infectious, and then to infectious mastitis. It differs from lactostasis in that bacteria begin to multiply in stagnant areas, and pus appears in milk. In advanced cases, a chest abscess may occur, which requires surgical intervention.

With the first symptoms of lactostasis, you need to analyze the possible causes that led to milk stagnation and eliminate them. Help with lactostasis should be aimed at the maximum emptying of the mammary gland, while it is necessary to remove the spasm of the duct, expand its lumen and remove the blockage.

In the fight against lactostasis, you can use both proven alternative methods and modern medical recommendations.

We normalize the feeding regimen

As soon as you notice that a lump has appeared in the chest, it hurts and milk does not separate well, in no case stop feeding! On the contrary, you need to try to change the position in which you usually fed, make sure that the baby sucks more actively, for this you can tickle him a little on the cheek or corner of the mouth during feeding. Most often, stagnation occurs in the upper-outer portion of the mammary gland. Therefore, you need to choose a position for feeding, in which this area will be more actively emptied. For example, the “rugby” pose, when mom is sitting, the child is lying on a high pillow, his tummy is pressed to his mother’s side. Or the “jack” pose, when mom and baby are lying on the bed with their heads in opposite directions.

If you see that milk arrives much more than the child needs, then the excess must be expressed. However, it is not necessary to express after each feeding, as a “vicious circle” can turn out – the more you express, the more milk will be produced, since the impulses go to the brain that it is “missing”. You need to express milk no more 1-3 times a day.

How to do this if the chest is swollen, sore, and it is impossible to touch it? First, you need to remove the spasm in the duct. To do this, you can take 1 tablet of no-shpa or apply warm tissue to the chest, and then make a light massage.

You can also make a warm bath for your chest, or take a warm, but not hot, shower.
Caution, do not make hot compresses on the chest, as this can cause increased reproduction of microbes, and lactostasis will turn into mastitis!

In addition, during the massage you need to act very delicately so as not to injure the stagnant lobule and not damage the duct. Breast massage with lactostasis is best done independently, since you can adjust the degree of pain and pay more attention to the compacted area. With gentle, gentle movements, stroking is first performed, then rubbing, and then kneading the affected mammary gland.

We remove the blockage of the duct

If you see that the nipple is reddened, thickened, lost elasticity and a white dot-bubble appears on it, then there may be a blockage in the duct. In this case, it is recommended to wash the nipple with warm water with soap and a sterile needle, gently pry off this bubble, and then massage and decant.

In no case should you insert a needle into the duct of the nipple! This could result in serious injury.

After the cork comes out (it may be similar in consistency to toothpaste), milk can splash with a strong trickle, and lactostasis will pass.

Alternative methods for the treatment of lactostasis: cabbage leaf relieves swelling and inflammation, honey improves the outflow of milk.

A very effective remedy is the cabbage leaf, it is used locally on the affected area. Cabbage is rich in vitamins and minerals, its juice has bactericidal properties. For the treatment of lactostasis, they take the cabbage leaf, scald it with boiling water, and then cut off the hard areas, prick it with a fork or beat it a little so that the cabbage starts the juice. After that, it is applied to the chest under the bra, changing 2-3 times during the day.

A good folk remedy for the treatment of lactostasis is honey. It is rich in biologically active substances, which are known for their healing properties in many diseases. If you make a honey cake first and then decant it, you can achieve better emptying of the mammary gland. On top of the cake is covered with cling film, and then you can put on a bra. Repeat this procedure during the day 2-3 times, you can leave the cake for the night.

Pharmacy drugs to help with lactostasis

The safe homeopathic remedy for lactostasis Traumel C has gained popularity.
The components included in its composition have a whole range of properties necessary for the treatment of lactostasis – decongestant, anti-inflammatory, absorbable and analgesic.

Traumeel in the form of an ointment or gel is applied to the chest 2-3 times a day, this alleviates the symptoms and makes it possible to express the milk well.

Should I make compresses?

Hot compresses should be avoided, as they can trigger the transition of lactostasis to mastitis. Perhaps the use of camphor oil or a solution of magnesia for a compress. Camphor oil has a strong odor, it should be used with caution, 1-2 drops on a base of neutral oil.

Gauze is impregnated with a solution of magnesia, a food wrap is placed on top, all this is applied to the affected area and is fixed for 1 hour. The condition is facilitated by antispasmodic and decongestant action.

We go to the clinic

If the treatment of lactostasis at home does not lead to success, the doctor may refer you to physiotherapeutic procedures. Ultrasound with lactostasis effectively and painlessly removes seals and stagnation, the mammary gland receives a kind of massage. In some cases, electrophoresis with medicinal herbs is prescribed, especially when it is not yet clear whether it is lactostasis or already mastitis.

Breastfeeding is not only nutrition, it is the process of communication between mother and child, energy metabolism. How I want this process to be cloudless! This does not always happen, however, knowing the basic principles and rules of feeding, you can avoid such a painful and unpleasant condition as lactostasis. 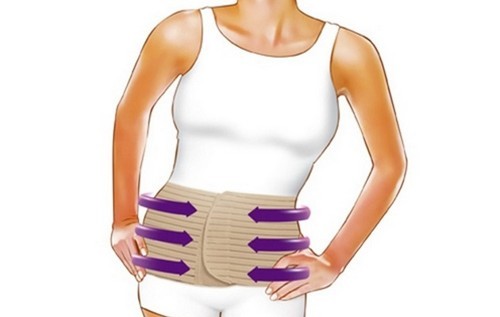 There are several types of postpartum bandages What foods can not be eaten during pregnancy