Going for that pint of ice cream after a bad breakup may not do as much damage as you think. A new study shows that despite the emotional turmoil, people on average do not report gaining weight after a breakup.

The study, which included researchers from Penn State, investigated the German concept of “kummerspeck” — excess weight gain due to emotional eating — which literally translates to “grief bacon.”

According to the researchers, although hoarding food after a breakup may have made sense for humans thousands of years ago, modern humans may have grown out of the habit.

“Food was much scarcer in the ancestral environment, so if your partner abandoned you, it could have made gathering food much harder,” said Dr. Marissa Harrison, associate professor of psychology at Penn State Harrisburg.

“It may have made sense if our ancestors hoarded food after a breakup. But our research showed that while it’s possible people may drown their sorrows in ice cream for a day or two, modern humans do not tend to gain weight after a breakup.”

The findings are published in the Journal of the Evolutionary Studies Consortium.

The researchers say it is well documented that people sometimes use food as a way to cope with negative feelings and that emotional eating can lead to unhealthy food choices. Because breakups can be stressful and emotional, it could potentially trigger emotional eating. 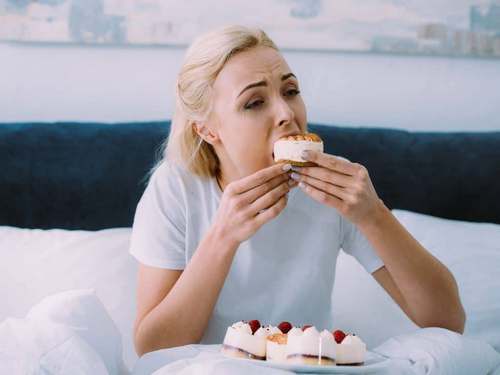 In addition, ancient relationship dynamics may have made packing on the pounds after a breakup evolutionarily advantageous.

“Modern women of course have jobs and access to resources now, but back then, it was likely that women were smaller and needed more protection and help with resources,” Harrison said.

“If their partner left or abandoned them, they would be in trouble. And the same could have gone for men. With food not as plentiful in the ancestral world, it may have made sense for people to gorge to pack on the pounds.”

Harrison also noted that the existence of the word “kummerspeck” itself suggested that the phenomenon existed.

The research team conducted two studies to test the theory that people may be more likely to gain weight after a relationship breakup. In the first experiment, they recruited 581 people to complete an online survey about whether they had recently gone through a breakup and whether they gained or lost weight within a year of that breakup.

Most of the participants — 62.7 percent — reported no weight change. The researchers were surprised by this result and decided to perform an additional study.

For the second experiment, the researchers recruited 261 new participants to take a different, more extensive survey than the one used in the first study. The new survey asked whether participants had ever experienced the dissolution of a long-term relationship, and whether they gained or lost weight as a result.

The survey also asked about participants’ attitudes toward their ex-partner, how committed the relationship was, who initiated the breakup, whether the participants tended to eat emotionally, and how much participants enjoy food in general.

While all participants reported experiencing a break up at some point in their lives, the majority of participants — 65.13 percent — reported no change in weight after relationship dissolution.

“We were surprised that in both studies, which included large community samples, we found no evidence of kummerspeck,” Harrison said. “The only thing we found was in the second study, women who already had a proclivity for emotional eating did gain weight after a relationship breakup. But it wasn’t common.”

Harrison added that the results may have clinical implications.

“It could be helpful information for clinicians or counselors with patients who tend to eat emotionally,” Harrison said. “If your client is going through a breakup and already engages in emotional eating, this may be a time where they need some extra support.”

Relocate Into Adulthood Seen As Critical Time for Obesity