They have been in Denver only a year and have been hoping to attend big holiday events. Their boys had been excited about the idea of the Parade of Lights. But this year there were no big crowds cheering on the floats.

The floats are displayed around downtown to amp up the holiday spirit, but no one lined the streets to watch them pass. It’s the era of COVID.

“We’re trying everything that we can to still provide an experience with some sort of sense of normalcy for this holiday season,” said Tiffany Owen area general manager of Union Station.

They call it “Winter Wonderlights” a display projected on the front of Union Station along with music. On Friday night, people walked by for a look, including the Jackson family of Westminster.

“You get stir crazy. You know you sit inside. You try to think of things to entertain the kids,” she said.

Normally, there would be crowds and fun. Santa would be set up inside. The Terminal Bar would likely be humming on a Friday night. Not this year. People were sitting distanced outside. Some families watched the lights and listened to the music.

“We are a pivotal point of the community,” said Owen. “We try to be the heart of this city and it’s been hard for these times quite frankly to try to find that sweet spot of safety and captivation for the community.”

The Downtown Denver Partnership coordinated a list of things for the holidays and the city tries to stay relevant.

“We invite you to unwrap the magic of the season as we light up the city in new ways, with sparkling lights, music, food, festive decorations, entertainment, and the beloved floats from the annual Parade of Lights spread throughout the Center City to provide a safe celebration,” reads the Partnership’s website for the “Winter in the City” event. But big gatherings like the parade and the New Year’s Eve fireworks on the 16th Street Mall are out this year.

All around the Denver metro area communities and businesses are trying to bring in a few people, not a lot.

“It’s more about having sustained foot traffic,” said Joe Hengstler, executive director of the Olde Town Arvada Improvement District. “This is 2020 and numbers are going up and we don’t want to see huge crowds. We also don’t want this to be a ghost town. We want people to come out and do it in a safe way.”

They opened a skating rink Friday night. Much of the downtown is open to foot traffic only on streets.

“None of this was designed to bring hundreds of thousands of people down at a time. With the ice rink, for example, you have to go online first, make a reservation or reserve your spot and even then we’re following Colorado public health guidelines on social distancing so the numbers are limited on the rinks.”

At Gaylord of the Rockies resort, they are still holding Christmas events.

“We did not want to not have Christmas,” said director of marketing Deann French.

But they’ve changed things around.

“We really had to think about how things got laid out. And think about the entrance and the exit and keeping those areas separate.”

Many events we’re used to attending that are still on like Zoo Lights require reservations. Parties are limited to five, leaving large families with limits. But there are ways to get out and distant. It’s just a matter of finding them and planning ahead. 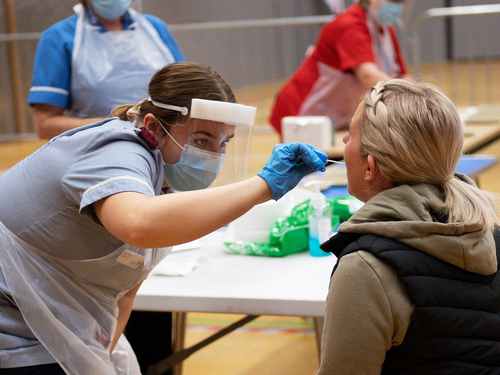