The prime minister’s office said Mr Johnson was feeling well and that his isolation would not stop him leading the country’s response to the pandemic. It comes as the government revealed it is planning to launch “mega labs” to double up the country’s efforts to produce a vaccine.

The UK has recorded another fresh spike of almost 25,000 coronavirus cases, as the second phase of lockdown restrictions in England hit the two-week mark.

Meanwhile, Boris Johnson has been asked to self isolate after a lengthy one-on-one meeting with an MP who has since tested positive for Covid-19.

Here’s the coronavirus news you might have missed overnight:

The UK recorded another 24,962 coronavirus cases with 168 deaths on Sunday. More 168 deaths have also been reported, taking the total tally so far to 51,934.

The number of deaths was done from Saturday’s 462, and a peak of almost 600 – though there are statistical fluctuations over the weekend when fewer officials are processing the figures. 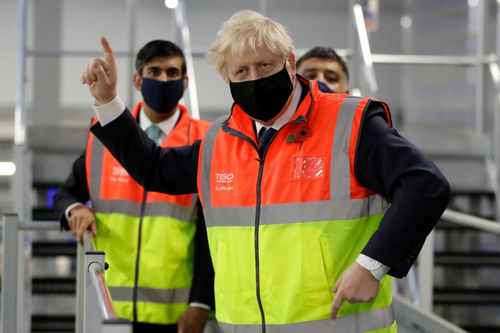 According to the head of the Office for National Statistics, the UK’s coronavirus growth rate is “slowing” and giving a “ray of hope.

Professor Sir Ian Diamond while speaking to Sky News said: “’The good news is – yes – we are seeing a slow down in the rate of growth.”

The UK became the first country in Europe to report more than 50,000 deaths, and it is the fifth country in the world in terms of the number of deaths during the pandemic.

“He will carry on working from Downing Street, including on leading the Government’s response to the coronavirus pandemic,” the Downing Street spokesman said.

The government has announced the opening of two new “mega labs” early next year, which are set to more than double the UK’s daily coronavirus testing capacity.

The laboratories will be able to process up to 600,000 samples a day when operating at full capacity, according to the Department of Health and Social Care (DHSC).

One will be based in Leamington Spa and the other in Scotland. The exact location of the latter is yet to be confirmed, said Scotland’s health secretary Jeane Freeman, calling it an “important step in our fight against the virus”.

The latest data on the government’s coronavirus dashboard shows capacity on Sunday was at an estimated 519,951 – with 379,955 tests actually processed.

This increased daily capacity of 300,000 in each lab will mean faster turnaround times for results, and each facility will have a workforce of up to 2,000 people, said DHSC.

A global pharmaceutical company is set to begin clinical trials of its potential vaccine in the UK.

Janssen Pharmaceutical Companies, part of Johnson & Johnson, will start the next stage of its vaccine testing on Monday with 6,000 volunteers from across the country.

Theirs is the third potential jab about to enter clinical trials in the UK, alongside US biotech company Novavax and the University of Oxford’s vaccine with AstraZeneca, whose trials are ongoing.

The Janssen vaccine is jointly funded by the government’s vaccine task force. The latest trial is designed to test its safety and efficacy.

‘Parents of disabled children be prioritised for vaccine’

Parents of children with complex disabilities should be among the first to receive a Covid-19 vaccine, a charity has said.

In a letter to Scottish health secretary Jeane Freeman and deputy first minister John Swinney, disability charity Kindred said parents fear catching the virus and being unable to look after their vulnerable children.

It said the majority of parents of disabled children are struggling to cope during the pandemic and are getting by on an average of just five hours of broken sleep a night.

The figures come from a survey by the charity of 42 parents whose children have complex disabilities and life-limiting conditions.

It found that more than a third of parents received no respite care before the pandemic and this dropped to 60 per cent after it began.

Will the lockdwon be extended?

With Christmas on the horizon, Mr Johnson has insisted that the strict lockdown will end as planned and the country will revert to the previous tiered approach of localised restrictions, however, some experts have warned that coronavirus restrictions may have to last beyond December.

England approaches the two-week mark on its second national lockdown which ends on 2 December.

Now, members from the government’s Scientific Advisory Group for Emergencies (Sage) have cautioned that the lockdown could be longer than expected.

The group released a new analysis that suggested infection levels would rise again to levels recorded at the start of November if further measures lasting beyond the end of lockdown.

Mr Johnson earlier said that Britons were “anxious” and “quite frankly fed up” with the pandemic, and said all four nations in the UK were working together on a joint approach to “ensure families can come together” during the Christmas period.

The government gave an influential lobbyist access to confidential briefings on the coronavirus pandemic, it has been revealed.

Former Sun political editor and current chairman of Portland Communications, George Pascoe-Watson, was quietly appointed as an “adviser” to the government in April.

He briefed paying clients on the government’s thinking, including on upcoming lockdowns.

Mr Pascoe-Watson emailed clients on 15 October, telling them he had been “privately advised” that new restrictions on London would last six months until the spring, the Sunday Times reported.