With capacity restrictions at ski areas, the lack of snow has been problematic. The more terrain that resorts can open, the more skiers they can allow on the mountain.

The latest snowstorm in the high country means ski areas can finally start to open more terrain, but it’s still a slower start to the season for most. The coronavirus pandemic has changed the way resorts operate.

“It’s been a little while since we’ve seen snow and Mother Nature’s back dropping the white stuff on us!” said Dustin Schaefer with Loveland Ski Area.

In Schafer’s 20 years with Loveland Ski Area, this has been one of the most unusual, but other than a lack of snow, things have been running smoothly. While Friday’s storm only brought a couple of inches, it was just enough for Loveland to work on getting more open.

“We’re working with our trail maintenance and snowcat crew, and we’re hoping to have some terrain, some new lifts open this coming week,” said Schafer.

Despite the restrictions and the lack of snow, it’s clear, people are eager to get out.

For the upcoming weekend, reservations at Breckenridge Ski Resort filled up fast. Officials with the resort sent a letter to those planning to ski, warning that with social distancing on lifts and gondolas, lines would be long and advised people to show up early.

The excitement over new snow not only brought people to the slopes, the Town of Frisco was bustling Friday with tubers, snow showers and cross-country skiers.

“To me, it’s almost indicative of how bad the drought is, that a smaller system like this, leads to so much excitement, because this should be the norm,” said Beck Bollinger, Colorado Assistant State Climatologist at Colorado State University.

From Bollinger’s perspective, it’s not just the ski areas that need the snow. The state as whole needs it to have any chance of recovering from a historic drought conditions.

“Average snowfall for the month of December is around 24 inches and so we should be getting normally about 6 inches per week this time of year in order to keep up with average.”

She said there’s still hope with big snow months ahead but chances that Colorado will see anything above average to help restore moisture to the soil, are dwindling.

“You have to have above average snowpack to really make a difference, and the way we’ve started this winter has definitely not been helpful,” she said. “There are still going to be plenty of opportunities for the skiing to happen, even if it doesn’t chisel away at the drought.” 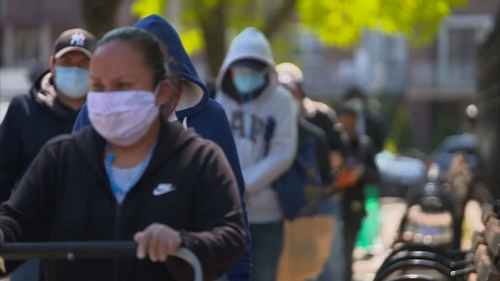 The New Acne, A Consequence of Preventing The Spread Of COVID-19

Why Are Out-Of-State COVID-19 Patients Being Sent To Colorado Hospitals?