There were an average of 47,700 new cases per day of Covid-19 in private households in England between 31 October and 6 November, according to estimates from the Office for National Statistics (ONS).

The R rate for the UK is estimated to have fallen to between 1.0 and 1.2, while the number of new daily infections remains around the 50,000 mark, the latest figures show.

This is up from an estimated 45,700 new cases per day for the previous week.

However, the ONS said that the increase in England’s coronavirus infection rate is “slower than in recent weeks”.

Separately, the government’s Scientific Advisory Group for Emergencies (Sage) has predicted that the R rate now stands at between 1 and 1.2.

This means that, on average, every 10 people who test positive for coronavirus will go on to infect between 10 and 13 more people.

Despite this, Sage has warned that deaths will continue to keep rising, adding that it was “confident that the epidemic has continued to grow in England over recent weeks”.

In a statement released on Friday, the group of scientists said: “Although there is some evidence that the rate of growth in some parts of the country may be slowing, levels of disease are very high in these areas.

“Significant levels of healthcare demand and mortality will persist until R is reduced to and remains well below 1 for an extended period of time.”

Sage also estimates that the number of new infections in the UK is growing by between one per cent and three per cent every day. The previous growth rate ranged between two and four per cent.

In response to the new data, professor James Naismith, director of the Rosalind Franklin Institute, said: “Taken together, we can conclude that the local lockdowns have slowed the spread to around 50,000 new cases per day at the start of this week. Stabilisation is not deliverance: 50, 000 cases per day will result in 100s of deaths every day. These deaths will be heartbreaking.

“By tonight, over 2,000 of our fellow citizens will have lost their lives to Covid-19 this week alone. These 2,000 people will have meant the world to someone.

“These deaths were predictable and predicted, they are simply a mathematical consequence of infections. The simple truth is that we remain unable to shield the elderly and vulnerable in the UK, nor has any European country.”

The ONS, which released its own data on Friday, said that an estimated 654,000 people in England were infected with coronavirus in the week up to 6 November — equating to around one in 85.

Over this period, the positivity rate increased in the southeast, southwest, East Midlands and the northeast, the ONS added. In London and the east of England, this rate appears to have levelled off. 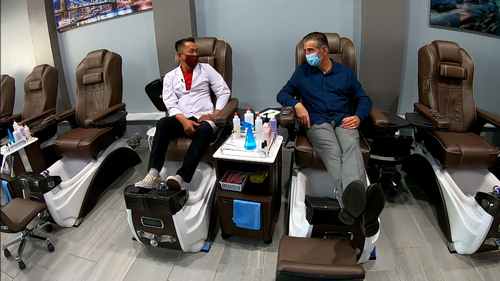