Meanwhile, redundancies in the UK have also seen a spike between June and September, while the new coronavirus lockdown is only expected to worsen already serious impacts on jobs and economy.

The UK has reported another significant spike in coronavirus cases, with weekly deaths attributed to Covid-19 exceeding a thousand in England and Wales for the first time since June.

The country has also boosted its testing efforts to trace asymptomatic infections with the deployment of thousands of so-called “lateral flow” tests in 67 different locations across the UK, following a successful mass testing pilot in Liverpool.

Here’s everything you may have missed overnight.

The UK’s coronavirus death toll has increased by 532 over the latest 24 hour period – the highest figure reported in a single day since 12 May – with the number of new cases rising by 20,412.

The rise in fatalities brings the total number of people to have died within 28 days of a positive coronavirus test in the UK to 49,770. The total number of cases has risen to 1,233,775, government data showed.

The latest figures were made public as new data from the Office for National Statistics (ONS) showed the number of weekly registered deaths involving coronavirus in England and Wales has exceeded a thousand for the first time since June.

There were 1,379 deaths mentioning “novel coronavirus” registered in the week ending 30 October, accounting for 12.7 per cent of all deaths in England and Wales, the ONS said.

The Department of Health and Social Care said an initial 600,000 lateral flow test kits – rapid tests usually involving a swab of saliva that can return results in 15 minutes – are being issued to some local areas in the days ahead as mass coronavirus testing to detect asymptomatic cases will be launched across 67 local authorities in England.

That number will be divided into some 10,000 tests to be made available to each of the areas and will be used to start testing priority groups. This will then be followed up with a weekly allocation.

Health secretary Matt Hancock told MPs he had written to directors of public health across the country over providing “10 per cent of their population per week” with tests.

Record spike in redundancies in UK

As the new national lockdown continues, concerns over rising unemployment mount with a record rise in redundancies between July and September.

The UK unemployment rate rose to 4.8 per cent from 4.5 per cent in the previous quarter, as Covid-19 continued to hurt the jobs market, official figures show.

The Office for National Statistics (ONS) reported a drop of 33,000 in the number of workers on payrolls last month, which has come down by 782,000 between March and October.

“July to September 2020 estimates show a large increase in the unemployment rate and a record number of redundancies, while the employment rate continues to fall,” the ONS said.

In the three months to September, redundancies reached a record high of 314,000. Young workers have borne the brunt of the job cuts with employment down by around 300,000 among 16- to 24-year-olds.

Covid-19 hospitalisation in the US hits record high

Coronavirus hospitalisations in the US hit an all-time high of 61,964 as the pandemic continued to surge across the country on Tuesday.

And the number of daily cases of the virus across the country also set a new high of 131,000, the highest single-day number since the public health emergency began.

The number of people being treated for the virus in hospitals has now more than doubled since September, according to the Covid Tracking Project.

The shocking number for Tuesday now exceeds the previous peak of 59,940 reached in the initial wave of the virus on 15 April, and the second peak on 23 July of 59,718.

The US became the first country to exceed 10 million cases on Sunday and now averages a record of 111,000 new cases a day, according to the New York Times.

More than 245,000 Americans have now died from the virus. Read the full details here.

UK universities to send students home for Christmas after lockdown

Universities in England are telling students to go back to their homes to spend Christmas with their families as soon as the lockdown ends next month.

Face-to-face learning should end by 9 December, new guidance says, allowing young people to travel at a time when the risk of Covid-19 transmission is lowest – after the four weeks of restrictions.

The guidance follows the furore over suggestions that students might be trapped in their halls of residence over the festive period, to prevent them spreading the virus across the country.

The husband and wife team behind the coronavirus vaccine

The global race for the first effective Covid-19 vaccine is on and a married couple, both physicians, have emerged as the dream team behind one potential inoculation that has shown the most promise so far.

On Monday, the pharmaceutical giant Pfizer announced that the vaccine they are developing with BioNTech is 90 per cent effective – an announcement that has generated global excitement, not least in the UK where Boris Johnson says the government has ordered enough doses of the vaccine to cover a third of the population. 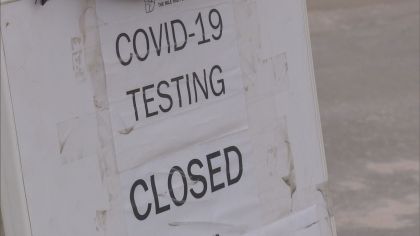