A day earlier, Susan Hopkins, a director of Public Health England (PHE) and chief medical adviser to NHS Test and Trace, said ministers would have to look at “strengthening” the tiered system.

The government has said it will wait until next week to decide how to end the current lockdown amid a warning that a tougher tiered system will be needed to bring down Covid-19 infections.

Robert Jenrick, the communities secretary, hinted on Tuesday that there could be a need for further coronavirus controls when the lockdown in England is lifted on 2 December.

Tier 1 restrictions that covered huge parts of England had “very little effect”, she said, adding that even tier 2 only worked in some areas.

Mr Jenrick told Sky News that work was under way “on what those tiers look like and how local areas go back in but that will very much depend on the data”.

Documents released last week from the Scientific Pandemic Influenza Group on Modelling, which reports to the Scientific Advisory Committee for Emergencies, said there was a “clear effect” on infection rates from strict tier 3 interventions but “much less from tiers 1 and 2”.

Any extension of the current lockdown would require a vote in parliament, suggesting Boris Johnson might be guided not just by the science but by what he believes will win the support of his MPs and a majority in the Commons. 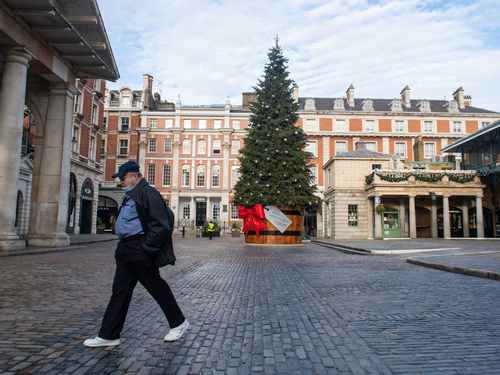 Reports at the weekend quoted a lobbyist as saying that he had been “privately advised that tier 2 restrictions will be imposed on London until at least the spring of next year”.

One option at ministers’ disposal is to embed the additional measures previously available to local areas placed under tier 3, effectively creating a tier 4.

These could include bringing in limits on the sale of alcohol as well as closing indoor entertainment and tourist sites.

Some gyms were allowed to remain open during the first rollout of tier 3 restrictions, but ministers could choose to mandate that all leisure centres close.

Libraries and other public buildings could also be shut and close contact services and care for all but the most vulnerable people could be halted.

After the first national lockdown, the government was keen to keep schools and universities open in any future tightening of the rules, but education is an area that could also face tighter restrictions under the as-yet-unknown revisions to the tiered structure.

Government sources have told Politico’s Playbook newsletter that Mr Johnson’s scientific advisers are considering ways to “dial up” the tiered system, which could, the website suggested, mean indoor socialising is banned in the lead up to Christmas.

However, the prime minister has previously said it was his “ambition” that the festive period would be spared the harshest of restrictions to enable families to gather.

Another option would be for England to emulate the sort of restrictions in place in Scotland, where a total of 11 council areas will be placed under the nation’s toughest coronavirus rules from 6pm on Friday to tackle infection rates.

Scotland has five alert levels – from zero to four – with the strictest band signalling the closure of non-essential shops, pubs, restaurants and gyms.

The government might decide to borrow that model, which would give it more flexibility in how outbreaks in different areas of the country were tackled.