More than a third of people in the UK regularly use mouthwash in a bid to freshen their breath and keep teeth and gums healthy. But should we bother?

A study by Harvard School of Public Health, published this month, suggests that using mouthwash twice a day could destroy protective ‘good’ bacteria in the mouth, raising the risk of diabetes by 55 per cent and increasing the likelihood of obesity.

It’s thought that certain bacteria in the mouth may help the body produce nitric oxide, which regulates insulin levels and keeps our metabolism ticking over.

But don’t bin your bottle just yet, suggests Dr Reena Wadia, a periodontist (a specialist in gum diseases) at RW Perio in Marylebone, London says: ‘It’s an interesting theory, but a lot more research is needed to establish if there really is a definite causal link.’

It’s thought that certain bacteria in the mouth may help the body produce nitric oxide, which regulates insulin levels and keeps our metabolism ticking over

Using mouthwash every day isn’t essential for everyone, she explains, but some products do offer extra oral health benefits alongside standard brushing and flossing.

Here, she assesses a range of the latest mouthwashes, which we then rated. Unless otherwise stated, products are available in High Street pharmacies or online. 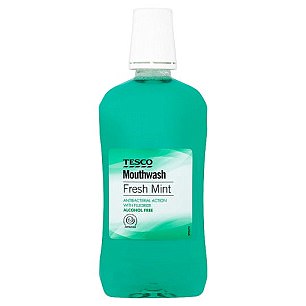 Tesco Fresh Mint Mouthwash, 50p: for those after a budget-buy to freshen breath, this is a good choice

CLAIM: An alcohol-free minty mouthwash with an antibacterial action. It also contains fluoride.

VERDICT: For those after a budget-buy to freshen breath, this is a good choice. It contains cetylpyridinium chloride, a commonly used antibacterial agent which has been shown to fight plaque and help combat bad breath.

As with all mouthwashes, it’s vital to use it at a different time to brushing – not straight after – or you’ll just wash away active ingredients in the toothpaste, including fluoride, which needs to stay on the teeth for as long as possible to have a protective benefit. 4/5 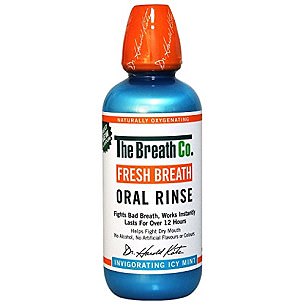 The Breath Company Fresh Breath Oral Rinse, £14: While this mouthwash claims bad breath can be treated by OXYD-8, based on current evidence, the key active ingredients for that chemical are chlorhexidine, cetylpyridinium chloride and zinc, none of which can be found in this mouthwash

CLAIM: This uses the ‘natural oxygenating power’ of OXYD-8 (a chemical derived from sodium chlorite that bleaches and disinfects) to destroy the bacteria that cause bad breath odour, including morning breath.

VERDICT: Halitosis, or bad breath, affects around a third of people in the UK. The causes include a harmless overgrowth of odour-causing bacteria on the tongue and, to a lesser extent, gum disease.

Morning bad breath is caused by the reduction in saliva production during the night, which means odour-producing bacteria aren’t washed away.

While this mouthwash claims bad breath can be treated by OXYD-8, based on current evidence, the key active ingredients for that chemical are chlorhexidine, cetylpyridinium chloride and zinc, none of which can be found in this mouthwash.

Tongue-cleaning with a toothbrush or a special tongue scraper once a day can also help, for a fraction of the cost. 1/5 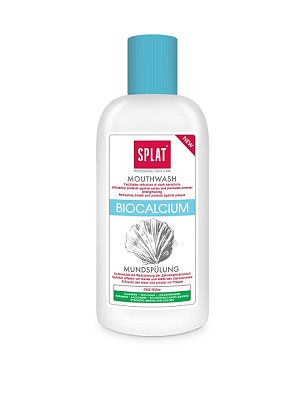 Splat Biocalcium Mouthwash, £3.75: Enamel restoration is more of a marketing ploy than an accurate description of what these products really do

CLAIM: This ‘natural’ fluoride-free mouthwash is said to help with ‘enamel restoration’ as well as whitening.

VERDICT: Enamel restoration is more of a marketing ploy than an accurate description of what these products really do. Once enamel (the outer surface of the tooth) is lost, it can’t really be restored, although weak spots can be strengthened.

I would want more evidence behind this formulation before I put it on my recommendation list. The best agent to strengthen enamel and protect against decay is fluoride, so I would always look for a mouthwash that contains it – this one doesn’t. 2/5 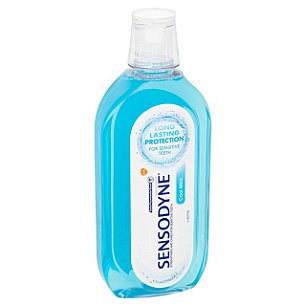 CLAIM: Protection for sensitive teeth in a mouthwash from ‘the No 1 dentist-recommended brand for sensitivity’.

VERDICT: Sensitive teeth are a widespread problem. We think this may be down to an increase in acidic drinks such as fizzy pop and fruit juices.

Teeth become sensitive when microholes are created in the protective layer of enamel, exposing the sensitive part of the tooth which contains the nerves.

Products for sensitive teeth aim to block up these tiny holes and/or reduce nerve stimulation. But I’m not sure this mouthwash would be that effective. Its key desensitising ingredient is potassium nitrate, but there’s limited evidence this will reduce pain, so it wouldn’t be my first choice.

You’d be better off buying a specialist toothpaste for sensitive teeth with agents proven to reduce sensitivity, such as arginine, calcium sodium phosphosilicate, stannous fluoride and strontium.

Always spit rather than rinse afterwards in order to keep the active ingredients on your teeth and gums. 2/5 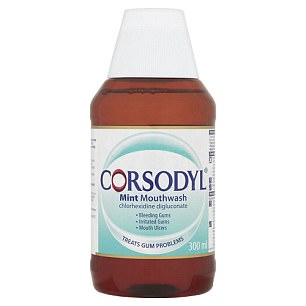 Corsodyl Mint Mouthwash, £5: If your gums are bleeding, your first step should always be to visit your dentist, as it’s a key sign of gum disease which can lead to tooth-loss

CLAIM: It reduces the formation of dental plaque and can also treat and prevent gum disease, control mouth ulcers, manage oral thrush and ease mouth sores caused by the wearing of dentures.

This mouthwash can be useful to help all of the conditions listed, including mouth ulcers as it works as a bacteria-killing antiseptic. However, while chlorhexidine can indeed help prevent dental plaque from forming on a clean tooth, it won’t actually reduce pre-existing plaque.

If your gums are bleeding, your first step should always be to visit your dentist, as it’s a key sign of gum disease which can lead to tooth-loss.

You should not use this mouthwash for longer than the one month recommended as there are many side-effects, including brown staining of the teeth and tongue. It can also affect your sense of taste. 4/5

Gengigel Mouth Rinse, £8.50: I tend to recommend a product containing chlorhexidine instead, such as Corsodyl, as at the moment there’s more evidence to back it up

CLAIM: The makers say this mouthwash, which contains hyaluronan, can soothe and speed up healing of any damaged gum tissue – such as sores or mouth ulcers – and stimulate the production of healthy tissue.

They cite a 2003 study from the University of Rostock in Germany, which found that hyaluronan helps gum tissue heal up to 50 per cent faster, increasing blood supply and reducing inflammation.

VERDICT: Hyaluronan – a natural substance found in connective tissues and produced during wound repair – does have lots of useful properties, including beneficial effects on the growth and repair of mouth tissues. This may encourage faster wound-healing.

But for the conditions this mouthwash claims to treat, I tend to recommend a product containing chlorhexidine instead, such as Corsodyl, as at the moment there’s more evidence to back it up. It’s also nearly half the price.

However, my recommendations may change if the research on hyaluronan continues to be just as promising. 3/5

Difflam Sore Throat Rinse, £7.99: This contains non-steroidal anti-inflammatory drugs and is known to be very effective in  relieving pain

CLAIM: ‘Fast-acting, long-lasting relief from throat soreness, denture discomfort and mouth ulcers,’ say the manufacturers. This is sugar-free but contains alcohol. It is not suitable for children under 12.

VERDICT: This contains the active ingredient benzydamine hydrochloride, which belongs to a group of medicines called non-steroidal anti-inflammatory drugs (NSAIDs) and is known to be very effective in easing inflammation and relieving pain. In mouthwash form it’s absorbed by the mouth and throat tissue, and so is useful to ease throat pain.

It can be used every one-and-a-half to three hours for up to seven days. As with all pain medication, it should not be used for longer, unless on the advice of a doctor or dentist.

It’s also not without side-effects, with the most common being numbness and a stinging feeling in the mouth. This can usually be reduced by diluting it with a little water. 5/5

Biotene Moisturising Mouthwash, £7.99: This is a helpful product, as the enzymes will provide better moisturising relief than water alone

CLAIM: This contains three enzymes – glucose oxidase, lactoperoxidase, and lysozyme – that are normally found in saliva.

The makers of this mouthwash say it ‘refreshes, hydrates and helps protect’ against dry mouth, providing up to four hours of relief. It can be used up to five times a day.

VERDICT: Dry mouth occurs when saliva flow is seriously reduced, and the condition appears to be on the rise.

Your risk of developing it increases if you have diabetes or take multiple medications. It’s also a symptom of Sjogren’s syndrome (an immune disorder causing dry eyes and mouth).

A dry mouth can make swallowing and talking difficult, and increases the risk of tooth decay, gum disease and bad breath.

This is a helpful product, as the enzymes will provide better moisturising relief than water alone. But it can’t completely substitute the continuous in-mouth secretion of saliva, and so relief is only temporary.

Sipping water often and chewing sugar-free gum can also help. 4/5
More than a third of people in the UK regularly use mouthwash in a bid to freshen their breath and keep teeth and gums healthy

Aquafresh My Big Teeth Mouthwash, Fruity Flavour, £2: Children should be supervised when using this mouthwash

CLAIM: This antibacterial formulation for children whose adult teeth have started coming through is said to fight plaque and kill germs. It also contains fluoride to strengthen teeth.

VERDICT: For children older than seven who have several teeth with decay and/or fillings, a fluoride mouthwash such as this, used as well as fluoride toothpaste, could be sensible.

But for children with no decay, the fluoride in toothpaste should be sufficient.

If your child has dental decay, it’s important to address the root of the problem – this usually means limiting sugary food and drinks.

Children should be supervised when using this mouthwash, as swallowing large amounts of fluoride can be toxic and cause symptoms such as dizziness, drowsiness or, in serious cases, convulsions.

You should take your child to hospital if you suspect this, taking the mouthwash bottle with you to show the doctors. 4/5 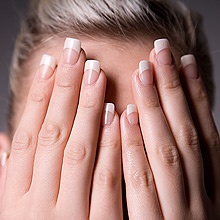