The idea is to make yourself feel horrible so that you may, after, feel wonderful. Its proponents describe it as, essentially, a thermonuclear-scale raw celery cleanse for the body and the soul.

“It’s like you’re having a fever or a major allergic reaction,” says Julia Allison, 39, now a media strategist for tech companies in San Francisco, recalling her first time taking kambo, a poisonous substance from an Amazonian frog that is trending as an alt-wellness wonder drug. “Then your face starts to blow up.”

“They call it ‘frog face’,” Allison says. “It kind of looks like a celebrity plastic surgeon went to town on your face, like Kim Kardashian in a fun-house mirror. And then, suddenly, you are unbelievably nauseous. You’re basically going from zero to the worst flu of your life within 60 seconds.”

Kambo, long used by some indigenous tribes in South America as a sort of rainforest vaccine, is not a recreational drug. You don’t trip, in the tangerine-trees-and-marmalade-skies sense.

In taking kambo, the goal is to purge not only so-called toxins trapped in your body but also, devotees say, psychological trauma and bad juju in general. 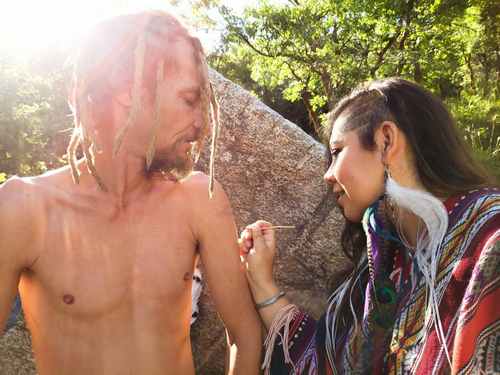 Kambo is catching on among the same crowd of coastal New Age elites in the US – Burning Man psychonauts, Silicon Valley disrupters, plant-medicine proselytes – that rallied around ayahuasca, the hallucinogenic rainforest tea, a decade ago.

And users should be warned: transcendence comes with a price.

“It was the worst experience of my life,” Allison says. “And I can’t wait to do it again.”

Technically speaking, kambo is a gluelike toxic secretion released on the skin of a giant monkey frog, known by herpetologists as Phyllomedusa bicolour, when the amphibian feels threatened.

The Kachinaua, Kurina and Kanamari have used kambo to treat various illnesses, build stamina and ward off bad luck.

To harvest the substance, they scour the forest, listening for the particular song of the frog. When they capture one, they often bind the frog cross-limbed, place it near a fire to induce stress, then dab its skin with small sticks, which function like hypodermic needles for administering the drug, according to a 2018 report by Jan Keppel Hesselink, a professor of molecular pharmacology at the University of Witten/Herdecke in Germany.

Whether in the Amazon rainforest or a California bungalow, the application of kambo is similar: practitioners use a glowing ember to create tiny burns on the shoulder, ankle or other parts of the body. After wiping away the blisters, they apply a kambo-treated stick to the raw areas.

On the US west coast, kambo ceremonies often come with neo-shamanic overtones. At the ceremony Allison went to in Berkeley, California, in February, attendees, after paying approximately $150 apiece and following a strict three-day cleanse of sugar, alcohol, pharmaceuticals, meat, gluten and dairy, lounged on pillows on the floor, wearing loose-fitting clothing, next to an altar covered with prayer cards, crystals and sage, while meditative music filled the room.

A soft-spoken medicine woman from Los Angeles named Aluna Lua began the ceremony by blowing a powdered tobacco snuff from the Amazon known as rapé up the nostrils of participants. Allison compares it to feeling “like you’ve been pleasantly electrocuted”.

Next came a drop of sananga, an Amazon plant extract, into the eyes. (“It basically feels like you’re burning your cornea,” Allison says. “I’m telling you, this is all just bohemian masochism.”)

Then it was time for the kambo. The flood of adverse effects – increased pulse and heart rate, a flushed and swelling face, nausea, diarrhoea – usually come within minutes.

“The theory is that kambo basically puts the body into a state that is similar to a fever, that febrile state when we’re sick that helps us to fight off infection,” says Dr David Rabin, a psychiatrist and neuroscientist in Monterey, California.

Or as Maria Teresa Chavez, a holistic health coach and kambo practitioner in Malibu, puts it, “It really creates what feels like a wringing-out of your organs.”

At its peak (or is it nadir?), subjects can find themselves projectile vomiting into plastic buckets for 15 to 40 minutes, or running to the bathroom with gastric distress. After the worst passes, they often peer into their buckets and analyse the colour of the discharge to gauge the treatment’s effectiveness.

“In my last session I released some sticky yellow bile, as opposed to bile in a clear liquid, and it was really rough on my stomach,” says Jena la Flamme, 42, a sexual empowerment coach in Mill Valley, California, who has used kambo numerous times. “I’ve seen people turn sheet-white in their face during the ceremony.”

Emily Collins, 33, an operations manager at a robotics company in San Francisco, recalls feeling “an overwhelming sense of ‘I don’t want to be here, I don’t want to do this’,” during her first kambo treatment two years ago.

“It was 15 minutes that felt like four hours,” Collins adds.

“I feel like it’s a warrior medicine,” says La Flamme, who credits kambo with helping to purge internalised anger from her divorce. “I feel like kambo is one of those things that give you superpower immunity. You kind of feel invincible from it.”

Collins recalls being sceptical when she first heard about kambo. “At first, my science brain thought this was hippie nonsense,” she says. But unable to overcome crippling migraines with conventional treatments, she went to a kambo practitioner named Steve Dumain in San Pablo, California, two years ago. Her kambo treatments with Dumain, a former fashion executive in New York, helped, she says: “I was up to about three migraines a month by the time I took kambo. After kambo, they went down to less than one.”

Following a traumatic event a decade ago, he found himself unable to shed a lingering sense of grief, despite talk therapy. “There always felt like there was something physically stuck, a somatic feeling,” Styer says. “Every time I went back to this memory, I’d feel the physical sensations – the tight chest, the anxiety, the overwhelmed feelings.”

But after his first kambo treatment, he says, the grief was gone. “The memory is still there, but the emotional weight and attachment that had formed to that memory was no longer overwhelming,” he says. “I even felt a physical looseness. I was feeling lighter.”

There has been some academic research on kambo. In the 1980s, Vittorio Erspamer, an Italian chemist and pharmacologist known for his research on serotonin, was one of the scientists who identified “a complex cocktail of biologically active peptides with antimicrobial, hormonal, and neuro activities” in frogs of the genus Phyllomedusa, according to an academic survey of the medicinal potential of those amphibians by Brazilian professors in 2010.

“Many medicines have come from natural products, particularly from places like the Amazon,” says Adam Perlman, the director of integrative medicine and health at Mayo Clinic Florida. “But at the moment, I don’t think the research into the pharmacology, not to mention the safety as well as the potential efficacy, is anywhere near where it needs to be before one would advocate using kambo in people.”

Even Rabin, a champion of psychedelic therapies including MDMA and ketamine, urges caution.

“I’ve heard very positive experiences, but these are all anecdotal,” Rabin says. “I think that there are enough hints out there that people could get significant benefits from this, which certainly makes it interesting, but it would never be something that I’d recommend as a first-line treatment, mostly because we don’t know enough about it yet, and it’s hard to find reliable providers who are trained to use kambo.”

“As a doctor, we always focus on ‘do no harm’,” he adds, which is why he would opt for ketamine, which he says carries few health risks, “over something like kambo, which could hurt or kill you if not used very carefully.”

Hesselink’s review of the medical literature uncovered several cases where kambo cleanses led to hospitalisations and even deaths, although some instances may have involved the wrong frog species, an overconsumption of water or preexisting heart conditions.

Such warnings, however, have not stopped Tulum-trotting coastal influencers from bowing to the powers of the frog.

“Last year, none of my patients had ever heard of kambo,” Rabin says. “Now, I would say 20 to 30 per cent of my new patients already know about it. I have a lot of patients who are like, ‘Oh, I’m going to do kambo this weekend.’”

Kambo is now included on the menu at ayahuasca retreats in Costa Rica and Mexico as a sort of cleansing appetiser. The International Association of Kambo Practitioners, a nonprofit in the Netherlands, has certified more than 400 practitioners since its founding in 2014, according to its website.

And increasingly, practitioners say, those curious about kambo are coming from slightly more mainstream places. “I get executives from Apple and Google, and then I get people who have been in the Rainbow Gathering,” Dumain says, referring to an annual peace-and-patchouli festival held in wilderness areas.

The idea of a body-shaking cleanse through projectile vomiting seems like an oddly appropriate response to a toxic year.

La Flamme, the sex coach, says she did kambo nine times in 2020 and now feels a “lightness and peace, a quietness in my soul”.

Lockdown ‘won’t be eased until cases drop below 1,000-a-day’