Britain’s chief scientist has said there is “no reason” for many people to stop working from home and return to the office – contradicting the prime minister’s comments days ago that people should go back to work.

Giving evidence to MPs on the Commons Science and Technology Committee, Sir Patrick Vallance said: “My view, and I think this is a view shared by Sage [Scientific Advisory Group for Emergencies], is that we’re still at a time when distancing measures are important. And, of the various distancing measures, working from home for many companies remains a perfectly good option because it’s easy to do.

“I think a number of companies think it’s actually not detrimental to productivity, and in that situation, there’s absolutely no reason I can see to change it.”

Sir Patrick admitted the UK has not had a good outcome from the coronavirus pandemic and he warned that the UK lacks enough tests for winter.

He said: “It’s clear the outcome in the UK has not been good. I think we can be absolutely clear about that.

He had previously said 20,000 deaths would be a “good result” in the pandemic, but the latest death rates show that the UK has seen more than 50,000 deaths linked to coronavirus.

Sir Patrick also said Sage, the government’s scientific advisory committee that he chairs, advised the government on 16 March to impose lockdown measures “as soon as possible”, adding that scientists realised then that “we were further ahead in the epidemic than had been thought”.

Asked by the shadow health secretary, Jonathan Ashworth, about Sir Patrick’s comments on the timing of lockdown, Matt Hancock told the House of Commons: “Of course, 16 March is the day I came to this House and said that all unnecessary social contact should cease. That’s precisely when the lockdown was started. It’s unusual to be attacked for saying exactly the same as the chief scientific adviser.”

Asked by MPs whether the UK had the capacity to test an estimated 350,000 people a day during winter, the chief scientist said: “We haven’t got a capacity to meet it at the moment.” He added that a plan was now being developed to increase testing.

Sir Patrick’s comments followed a report earlier this week by the Academy of Medical Sciences that warned of a potential Covid-19 resurgence alongside flu, with a worse impact than that seen in the first wave in March and April.

Sir Patrick also told MPs: “It was quite probable we will see this virus coming back in different waves over a number of years.

“When people talk about a second wave, what I think they’re talking about really is a re-emergence of the first wave. All we have done is suppress the first wave, and when you take the brakes off, you would expect it to come back.”

He said it was not yet known whether there would be a more traditional second wave based on the seasons, adding: “I think that there’s a very high likelihood that come winter, we will see an increase in cases.”

Asked for his reflections on the management of the outbreak, Sir Patrick said the lack of data and flows of information could have been better and that was “an important lesson, not just for pandemics but any emergency”.

He also questioned the “structure and the way that Sage operates” and said: “It’s never been set up to work for 47 meetings.

A third area, he said, was the presence of scientific knowledge across government departments, emphasising that Sage was only an advisory body.

Sir Patrick defended Sage in relation to care homes, telling MPs that the issues in care homes were mentioned as early as February in Sage minutes and many times since.

He said Sage did not have “policymakers in its grasp” and that it did not make decisions on operational issues.

On the threat of the coronavirus to children, he said severe disease was “extremely rare” in children and that they may be “infected less” by the virus.

He added: “If you look at countries that have reopened schools, [children] are seldom the cause of the outbreak.”

He also told MPs it was “crucially important” that the indirect impact of the lockdown on people’s health was considered: “If you look at overall excess deaths, then you’re looking at the integrated effect of the virus itself with all the other reasons people may have suffered as a result of this.

“We do need to understand the impact of that and it’s very clear that lockdown itself carries risks, and those risks are to both physical health and mental health.” 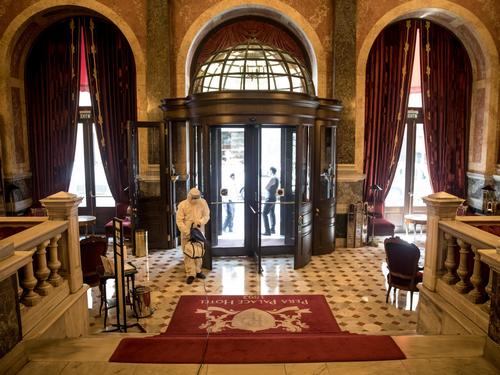 Some air conditioning units risk spreading Covid-19 and should be turned off, advise experts