An indepth investigation by The Independent revealed on Sunday concerns the government’s testing strategy had been too slow and cost lives by centralising testing in the labs, which had been hit with problems that meant they were not up and running until after the peak of the epidemic had passed.

Expanding the number of mega-labs to test for coronavirus will worsen data-sharing problems which have plagued the UK’s testing programme, experts have warned.

The Institute of Biomedical Science (IBMS) said it was concerned to learn the government was considering setting up more Lighthouse Laboratories to create one in every NHS region.

It warned this would exacerbate existing problems with the sharing of patient information.

Public health officials have complained they are still not getting access to patient data.

In Leicester, which has become the first city to be placed under local lockdown restrictions, it took more than a week for key data to be shared with local officials from Public Health England (PHE).

In a statement, the IBMS said: “Whilst we recognise the need to rapidly upscale testing capacity and the fact that this will be an ongoing requirement, we have consistently voiced our members’ concerns about the centralised approach to testing.

“This has led to the creation of the Lighthouse Laboratories as a parallel but disconnected testing stream for Covid-19 and there has been a lack of transparency around processes of clinical governance and, in particular, the limited IT connectivity of these laboratories to clinical systems already in place.”

The institute, which represents 20,000 biomedical scientists and hundreds of NHS labs, said it was vital labs were able to share results with clinicians and allow them to follow-up on results.

It added: “The Lighthouse Laboratories in England have failed to deliver robust data and, although links with NHS laboratories have started to emerge, the data flow is still stilted with many manual checks and conversions required. Links with clinical systems are still poor and the data generated raises more questions than it answers.”

The three Lighthouse laboratories – based in Glasgow, Milton Keynes, and Alderley Park in Cheshire – were set up with volunteer scientists and lab technicians to carry out mass testing. The government is now considering setting up new labs in each of the seven NHS regions across England, but it is not yet clear who will operate them.

The Independent has learned the Lighthouse Labs were set up in a way that meant they do not report test results directly to PHE, which is a requirement under regulations governing notifiable diseases such as Covid-19. Instead the labs send results linked to a barcode to the NHS, which then aligns that to patient data and sends it to PHE.

Until the start of this month public health directors were not able to see even basic details on the numbers of people testing positive in their area and even now they can only access aggregate data.

The IBMS said the government should consider changing tack and setting up labs that were more integrated.

It added: “Models exist within the UK that must be considered before a commitment to additional Lighthouse Laboratories. All Covid-19 results in Wales have been entered into NHS IT systems and this has provided a strong database of results and impressive turnaround times for reporting. NHS Scotland has established ‘node laboratories’ which are collaborations between hospitals and universities. These laboratories are run as extensions of existing NHS laboratories and all results are entered onto the NHS systems.

“As the prevalence of this disease begins to decline, it is essential that any additional laboratory provision should be integrated with the NHS and results entered into NHS systems in a timely fashion. Careful follow-up of individual cases will be vital to ensure we continue to drive down the prevalence of this disease, but this will not be possible until the Lighthouse Laboratory reporting procedures are aligned with the NHS system.

“We are calling on government to support the integration of these Lighthouse Laboratories with accredited NHS laboratories, across the pathology networks, that are run with regulated staff.” 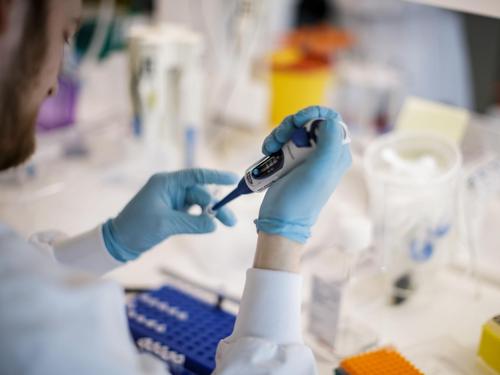 AstraZeneca hopes to start delivering doses by end of the year

Leicester residents express fears for their businesses as lockdown extended