The Humber Centre, in Hull, is a secure forensic psychiatry unit, more commonly used for treating those who have committed crimes because of a serious mental illness. Ryan has been locked up by the NHS having never committed a crime.

For the last four years he has been isolated in long term segregation and monitored at all times by at least three staff. Over the years, he has been so heavily medicated with powerful drugs he has had to have 14 teeth removed. He was fitted with dentures but they were lost 18 months ago and have yet to be replaced, his mother said.

Hospital reports seen by The Independent show he has also suffered bruises after being restrained by nine staff, as well as a broken arm and a broken foot. There have also been suggestions by staff in reports that he shows signs of sexual abuse.

It has been 14 years since Ryan, now aged 31, was first taken to hospital under the Mental Health Act and his doctors, nurses, NHS managers and even a tribunal judge, all agree he should not be languishing in detention. But despite the promises from the NHS to get him out, he is still there. And he is not alone.

Desperate to know how her autistic son Ryan was coping after being detained for years in an NHS mental health hospital, Sharon Clarke dialled the telephone number for the ward again, struggling to understand why she couldn’t get through – she had no idea then that both her and her husband’s telephone numbers had been deliberately blocked by NHS staff.

Whoever was responsible has never been identified but the intentional act in October 2019 was yet further proof for Sharon that her son was in the wrong place and needed help to get out.

The latest data published this week showed there were hundreds of patients diagnosed with autism detained in mental health units in England, and despite promises to get them out, the numbers are rising, having more than doubled from 295 in March 2015, to 610 in June this year.

In total, there were more than 2,000 patients with both learning disabilities and/or autism detained in hospitals. Locked away from their families, deprived of a normal life in institutions that far from treating them, actually exacerbate behavioural problems making it even harder for them to be released.

Ryan’s mother Sharon told The Independent she regretted the day she called the NHS for help after her son, then just 17, self-harmed with a razor, causing superficial injuries months after he had been prescribed the anti-psychotic drug olanzapine.

“I knew it was a cry for help. I rang the NHS crisis team and asked for help. They came and took him into hospital.

“He was crying to come home but I told him he had to stay because they were going to make him better. All these years later, look where we are.

“They have not only stolen him away from me, they’ve stolen his youth away from him.”

Initially, Ryan was detained in an open mental health hospital but as his behaviour deteriorated, brought on by detention, he was moved to more secure units. In total he has spent nine years in secure forensic mental health wards.

He was finally diagnosed with autism only at the beginning of 2018 and his hospital reports, seen by The Independent, make clear he has suffered a form of post-traumatic stress disorder as a result of being detained away from his family for so long.

On visits to see him Sharon was told for years she could not hug her son, although this has been relaxed since his autism diagnosis. She was not allowed to take pictures or see the room where he lived. Ryan is brought to her when she visits him.

“I can’t see where my son lives, where he eats. I’m not allowed. You imagine all sorts of things, is it just a mattress on the floor?”

Between October 2017 and February 2018, Ryan and his mother were unable to see each other. He had been put into seclusion by staff after showing aggression and violence and was not allowed any contact at all with the outside world.

His mother said Ryan had never been violent before being detained and she believes that, like many autistic people in hospital, his behaviour is being made worse as he becomes more institutionalised.

“He did have problems. He hated surprises but apart from that he loved animals and was a proper family person. He was never violent or aggressive, never.

“I can’t believe the things they say he has done, it’s just not my son. He has become institutionalised. I want him to come out and become the son I know.

“If I was locked up like him I would probably react the same way.”

The Humber Centre for Forensic Psychiatry, in Hull. run by the Humber Teaching Foundation Trust (Google)

When her telephone number was blocked from being able to call the hospital ward last year it was a final straw for Sharon who is demanding the NHS releases her son from the hospital into a community-based placement.

“It was a weekend when it happened. They were short-staffed, and I only phone up twice a day in the morning and night to check Ryan is ok.

“You think of nurses as caring but that is not caring. The trust I had with the hospital to look after my son has gone out the window, I can’t trust them now.”

Sharon made a formal complaint and in its response last December, NHS England’s regional director of commissioning said the Humber Foundation Trust had investigated and “confirmed that you and your husband had had your phones blocked” but added: “Due to the number of staff that had been on duty over that time they were unable to determine who had done this. Therefore, they are unable to bring about a disciplinary investigation. Senior managers were clear with the team that this was unacceptable and underlined that this action amounts to misconduct.”

The letter promised NHS England and the Hull Clinical Commissioning Group, which is responsible for commissioning NHS services in the area were looking to develop a community care package for Ryan. Sharon says she has heard these promises before and nothing has been done.

Dr Sushie Dobbinson, a speech and language therapist at the hospital, expressed her fears for Ryan in a document dated July 2018. She said: “Ryan’s environment continues to concern me as it does not allow for meaningful work to improve his presentation. The literature and our experience strongly indicate that seclusion in autistic spectrum disorder exacerbates symptoms and is detrimental to mental health.”

She warned patients with autism “often become more inward looking the longer they are secluded”.

She said the situation meant Ryan was at risk of harm, adding: “I continue to advocate for Ryan to be moved to a unit suitable for his ASD [autism spectrum disorder] needs and to warn of the consequences of long term seclusion for this very unwell young man.”

An independent tribunal earlier this year backed up her fears, saying there were concerns that the hospital was “inappropriate because the high level of security is likely contributing/leading to an increase in disturbed behaviour and is therefore counter-therapeutic”.

But the tribunal was clear who was at fault, saying: “Of equal concern is a lack of progress by the CCG [clinical commissioning group] and NHS England in formulating a discharge plan. Significant periods of time between meetings have been noted.”

An independent care treatment review in April also red-flagged multiple concerns about Ryan’s care and his prolonged detention. It said the panel had “great concern” for Ryan’s “experience of care and safety”.

This situation has had an effect on Ryan. Staff have described him struggling with his self-esteem and sometimes telling himself off. They report he sometimes paces, punches walls or the air. His levels of violence and aggression have got worse.

Sharon told The Independent: “If they don’t get him out this year, or in the next couple of months I don’t think there will be much left to get out.

“Something needs to be done as soon as possible. They are ruining people’s lives.”

Ms Clarke says he has asked for meetings with hospital bosses and contact details for Hull CCG but these have not been provided.

Ryan Addison, pictured with his mum Sharon Clarke before he was detained by the NHS (Handout)

This situation is being repeated across the country for hundreds of other patients with specialist autistic needs.

Jane Harris, from the National Autistic Society, told The Independent Ryan’s treatment by the NHS was “inhuman” adding: “We know from Ryan’s autism diagnosis, he’s been put somewhere that is often doing the opposite of what he needs. He is being traumatised by an attempt to treat him.”

She said the case, and many others like his raised questions about whether his human rights were being breached saying: “It’s clearly a human rights issue. How can it not be? He hasn’t got a family life at the moment.”

She said it was too easy under the Mental Health Act to detain people with autism, adding: “These powers that are meant to be used for emergencies are ending up being used for years and years and totally changing the course of someone’s life.

“We’re in this ridiculous situation where hundreds of autistic people are in these kind of units, but actually the Mental Health Act code of practice says they shouldn’t be.

“It’s known that if you don’t give autistic people the kind of environments and the kind of support that they need. Then their mental health will deteriorate, that’s just a fact. It’s totally morally wrong and indefensible.”

She said there were many examples of people being released from hospitals and going on to live safely in the community.

“This is the really ridiculous thing about the situation. It’s not useful for anybody. It’s awful for Ryan and it’s awful for his family. But it doesn’t help the taxpayer either.”

Earlier this week the government announces a new £62m fund, over three years, to help local councils pay for bespoke care packages in the community which should help ensure patients are discharged from hospital. But councils have faced increased costs during the coronavirus with social care estimated to need up to £10 billion by the Health Foundation.

A report by Parliament’s Joint Committee on Human Rights last year highlighted there were widespread breaches of human rights for patients detained in hospitals.

In a joint statement from Hull CCG and Humber Teaching Foundation Trust the organisations said they were working together “to support Ryan’s future care needs. We communicate regularly with his family with the aim of ensuring we are able to provide Ryan with a future place in the community, and level of care, which is suitable for him. Above all, we want him to live a full and active life out of hospital.

“The recommendations of all independent care and treatment reviews are implemented as appropriate and changes required are made in a timely way to address any issues raised.”

A spokesperson for NHS England said: “There is complete agreement that alternative options need to be available.” 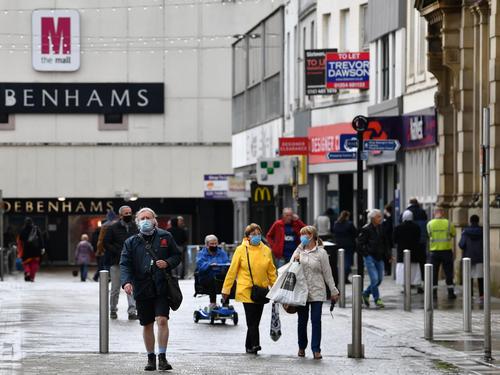