The 60-year-old former Dragon’s Den star told FEMAIL she first took up smoking at 15, only giving up for a five year stint after she discovered she was pregnant with her son, who is now 31.

Hilary Devey has vowed to finally kick her 40-year smoking habit after a health scare made her question her lifestyle.

Even suffering a stroke in 2009 wasn’t enough to stop the businesswoman and self-made millionaire from kicking the habit.

‘I had a separate health scare earlier this year, which turned out to be a misdiagnosis, but it was enough to make me realise that I needed to change my lifestyle – and finally try to quit smoking for good,’ she said.

Strengthening Hilary’s resolve are the results of a lab test she took part in with Public Health England, which revealed significantly elevated levels of harmful carbon monoxide and cadmium in her blood – both associated with cancer and heart disease.

While she anticipated the results would be ‘pretty bad’ after decades of smoking, Hilary admitted to being ‘shocked’ by the stark figures, as she pledged to start 2018 smoke free. 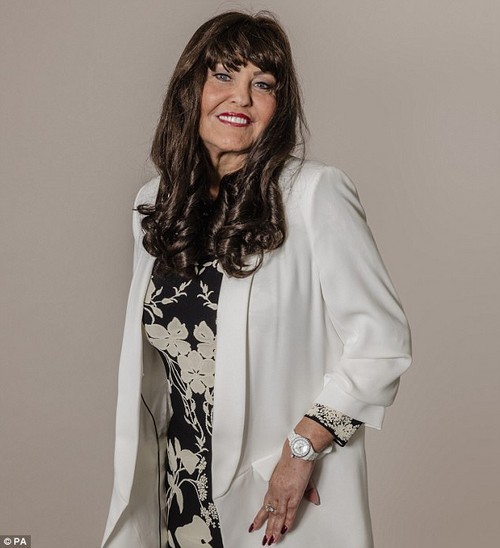 ‘It’s not so much that I’ve found it difficult in the past to quit smoking, but more the fact that I’ve never actually tried to do it,’ Hilary said.

As part of a new campaign from Public Health England that shows the dangers of tar in cigarettes, Hilary was given an insight into the impact of the poisons that had been entering her bloodstream, which spread around the body within seconds causing damage to major organs.

She was tested as part of a lab demonstration and learned that she had elevated levels of harmful substances including cadmium, nitrosamines and carbon monoxide in her blood – all of which are associated with cancer as well as heart, lung, kidney and liver diseases.

Hilary said of the damning results: ‘To be honest, I knew they’d be pretty bad, as I have been smoking for so many years now.

‘I’m 60 years-old, but I must have spent at least 40 of those years as a full-time smoker.

‘That said, when I was given the graphs and the data showing all the different poisons I’ve been taking into my body by smoking, it was still really shocking.’ 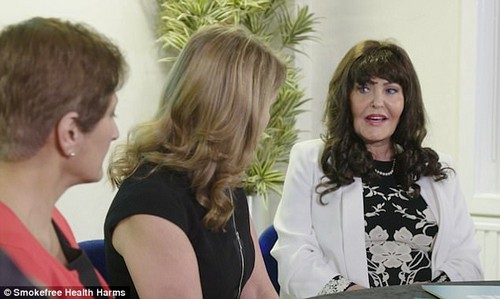 The self-made millionaire gave up smoking for five years when she had her son 31 years ago, but picked up smoking again

THE POISON IN YOUR CIGARETTE SMOKE

Exposure to cadmium for a long period of time is associated with an increased risk of damage to the kidneys and bones and may lead to lung cancer.

Research has shown that if you regularly smoke 20 or more cigarettes a day, you are twice as likely to develop kidney cancer compared with a non-smoker.

They are potent chemical compounds, many of which are carcinogenic (cancer-causing).

They can cause DNA damage, cell death and are associated with cancers of the pancreas, mouth, respiratory and digestive tracts.

Carbon monoxide decreases the ability of the blood to carry oxygen and consequently puts a strain on the heart. Carbon monoxide is also associated with an increased risk of blood clots and coronary heart disease.

These toxic substances are amongst over 4,000 chemicals released into the body with each cigarette smoked, including more than 70 known cancer-causing compounds.

Hilary is now quitting smoking with the help of NHS Smokefree and says that she is looking forward to reaping the health benefits.

‘My son is now 31 years of age, and I want to make sure he has me around for many more years, so as soon as I heard about the Smokefree campaign, I just knew this was for me,’ she said.

‘I’m sure I’ll be a lot more active once I’ve stopped smoking. I’m looking forward to not being so out of breath, for example!

‘Without doubt, kicking the smoking habit will only help to improve my overall health. I think it’s natural that as you get older, you learn how to look after yourself a lot better, in terms of eating healthily, and just being more aware of your general well-being.’

There are many ways to quit smoking, including free proven support from NHS Smokefree. People can choose what works best for them: face-to-face help, stop smoking aids, a quitting app, email, social media, and SMS support. Find out more at www.nhs.uk/smokefree

The 6 weirdest sex injuries ER doctors have ever seen