Lindax and Reduxin have an absolutely identical effect on the body’s production of serotonin and norepinephrine. These drugs are similar in their ability to maintain hormone levels due to the content of the same concentration of sibutramine in their composition.

The absorption of drugs after use occurs in the shortest possible time. The maximum concentration is reached after 3 hours from the start of administration.

Absolutely the same is the connection of sibutramine Lindaxa and Reduxin with blood proteins and is 97%.

Thanks to these drugs, not only the amount of body fat decreases, but also the indicators of harmful cholesterol and uric acid fall.

The effective action of Reduxin and Lindaxa eliminates the constant feeling of hunger. The amount of food consumed is reduced significantly. The result is manifested within 4 days of the intake process and is kept in balance until the end of the course of treatment.

Overweight is the scourge of modernity. People suffering from excess body fat are often not helped by either diet or exercise. Significant help in these cases will be provided by such drugs as Reduxin and Lindax.

A drug of Russian manufacture Reduxin is internationally known as Sibutramine. The need for the appointment of a domestic drug occurs in case of excess body weight and has the same indications as Lindaxa.

Sibutramine, which is part of the drug, relieves hunger. By maintaining optimal levels of the hormone serotonin, the amount of food consumed is significantly reduced.

The decision to use Reduxin for treatment can only be made by a doctor. The duration of use of the drug is no more than 2 years.

Lindax – a medicine for the treatment of obesity abroad

This drug is produced in the Czech Republic by Zentiva. Lindax successfully copes with reducing body fat. The main effect of the drug is aimed at balancing the amount of hormones serotonin and norepinephrine. 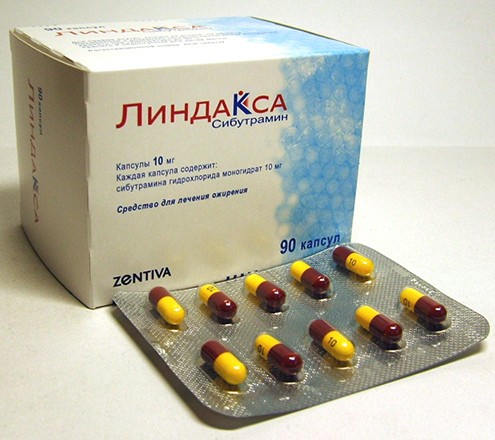 By maintaining a high level of serotonin, a feeling of fullness occurs with minimal food intake. The drug helps the body avoid stress while reducing daily calories.

Lindax should be taken only as prescribed by the doctor and in cases where non-pharmacological methods have failed.

A more detailed acquaintance with Lindaxa and Reduxin allows you to objectively compare the effectiveness of these medications. Conclusions made on this basis will help to make a choice in favor of a particular drug.

Release form and composition of Reduxin

The drug is offered to the consumer in capsules. Sibutramine contained in them is responsible for the therapeutic effect of this drug. Russian pharmaceutical companies produce Reduxin in two variations. Namely:

The excipients are microcrystalline cellulose and calcium stearate.

By the amount of substance that has a therapeutic effect, both drugs are identical. The differences between Lindaxa and Reduxin are in the content of excipients and the color of the capsules.

Release form and composition of Lindaxa

Lindax is produced in capsules. According to the amount of sibutramine substances contained in them, the developers propose the use of the drug in two concentrations:

Czech and Russian products designed to combat excess body fat can be used in the following cases:

The dose of Reduxin for each patient is individual. It all depends on how well these drugs are tolerated and on the level of positive effects on the patient’s body. Therapy begins with 10 mg per day. The lack of positive dynamics over a four-week period allows you to increase the amount of medication taken to 15 mg per day.

Capsules are swallowed whole and washed down with water. Reduxin can be taken on an empty stomach and with meals in the morning. The recommended duration of therapy should not go beyond two years.

The dose of Lindaxa is set similarly, depending on tolerability and effectiveness. Treatment begins with capsules containing 10 mg of sibutramine. At the end of the 4-week course, in the absence of a significant effect and good tolerance, the dose increases to 15 mg per day.

Lindax is used 1 time throughout the day, preferably in the morning, regardless of food intake.

All of the above allows us to conclude that the methods of application and dosage of Lindaxa and Reduxine are similar.

What is important to know about contraindications

Reduxin and Lindax are medications. The use of these drugs is limited by the following contraindications:

The listed contraindications are related to the use of both Reduxin and Lindaxa to the same extent.

A detailed comparison of the data of medications suggests that Reduxin and Lindax are analogues of each other.

The difference between the drugs is in the excipients contained in them and in the country of manufacture of these drugs.

Reduxin and Lindax are potent drugs. Their reception should not be started without consulting and prescribing a doctor.

Chloropyramine or Suprastin, which is more effective