Scientists from the University of Edinburgh, the University of Strathclyde, and Public Health Scotland gathered vaccine data between 8 December and 15 February, during which 1.14 million doses were administered among the Scottish population.

The Covid-19 vaccines deployed in the UK substantially reduce the risk of hospital admission, real-world data from Scotland has shown.

Four weeks after receiving a first dose, both the Pfizer/BioNTech and Oxford/AstraZeneca jabs cut hospitalisation with the disease by up to 85 and 94 per cent respectively.

Among those aged 80 years and over – one of the most vulnerable groups – the two vaccines were associated with a combined 81 per cent reduction in hospitalisation risk.

The findings offer the first real indication of the impact of the UK vaccine rollout, raising hope that the jabs will help to end the acute phase of Britain’s epidemic.

The Pfizer vaccine was received by some 650,000 people, while 490,000 doses of the Oxford jab were administered.

Researchers analysed data for every week during the study – including GP records on vaccination, hospital admissions, death registrations and laboratory test results – and compared the outcomes of those who had received their first jab with those who had not. 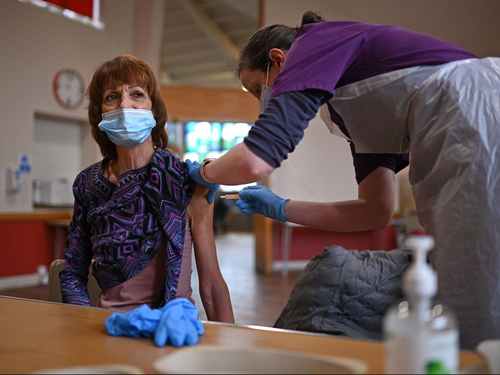 Lead researcher Professor Aziz Sheikh said: “These results are very encouraging and have given us great reasons to be optimistic for the future. We now have national evidence – across an entire country – that vaccination provides protection against Covid-19 hospitalisations.”

Over the course of the study, the coronavirus variant first detected in Kent accounted for 80 per cent of positive cases, the researchers said.

This suggests the vaccines remain effective in neutralising and providing protection against the highly contagious UK variant.

Dr Jim McMenamin, national Covid-19 incident director at Public Health Scotland, said: “These results are important as we move from expectation to firm evidence of benefit from vaccines.

“Across the Scottish population the results show a substantial effect on reducing the risk of admission to hospital from a single dose of vaccine.

“For anyone offered the vaccine I encourage them to get vaccinated.”

The results, which do not include any analysis on the impact of the vaccines on virus transmission, are preliminary and have been submitted to a journal to be peer reviewed.

The researchers said their findings are applicable to other countries using the Pfizer and Oxford vaccines, and are likely to be “generalisable” to the rest of the UK.

With the latest figures showing that more than 17.5 million people have received a first dose of a Covid-19 vaccine across the UK, Mr Zahawi said the prime minister will also reveal critical data on the effect of the jabs on hospital admissions and transmission of the virus.

“The prime minister will say more about this, but you will know that Public Health England have been running a couple of large scale studies,” he told Sky News.

“Suffice to say the evidence looks good. The Oxford team demonstrated their own evidence of cutting transmission by two thirds.”