Before the introduction of the suspension is shaken, so that its components are distributed in the liquid evenly.

The vaccination scheme depends on the age of the baby:

Excess dose Prevenar is not possible, because 1 bottle (syringe with suspension) contains only one dose of vaccine. If you introduce the next vaccine earlier than recommended after a previous vaccination, then the child may experience the same side effects and complications as with using the vaccine in the right doses.

Vaccination Prevenar can be combined with the introduction of other vaccinations with the condition that the injections will be performed in different parts of the body. The drug is not administered only with BCG.

Introduction Prevenar stimulates the production of immunity against Streptococcus pneumoniae – types of streptococcus that provoke pneumonia, acute otitis media, meningitis and other diseases. Especially often such infections develop in children under 5 years of age, therefore, it is recommended to begin vaccination against pneumococcus even in infancy.

Although anti-bacterial agents, unlike viruses, act on streptococci, many of these types of bacteria become resistant to antimicrobial drugs over time, so vaccination is considered more effective.

Vaccination is given to babies over the age of 2 months and is especially important for:

At the age of 5 years and older, Prevenar does not carry out vaccination, since in these children, as in adults, the desired immune response does not develop after the administration of the drug.

However, the drug has certain disadvantages:

If the crumbs intolerance, vaccination cancel, and other cases are the reason to postpone the vaccination until full recovery of the toddler.

If the crumbled blood, the injection is done 3-4 months after such a procedure.

Side effects and possible complications

Prevenar rarely provokes a side reaction, but it can be in the form of:

In some cases, the introduction of Prevenar may cause complications, such as an immediate allergic reaction.

To prevent such negative reactions, it is important to take into account contraindications and make sure that the child is completely healthy on the day of vaccination, his temperature is normal, there is no cold, there is no redness of the throat, and chronic diseases are in remission.

If the child is prone to allergies, the doctor will prescribe one of the antihistamine drugs. Such training in most cases helps to prevent complications.

In addition, after making an injection, you should not immediately go home. It is advisable to stay in a medical facility for at least half an hour to eliminate the occurrence of an immediate type of allergy. It is also worth a few days after the introduction of Prevenar to limit the contact of the child with other people.

If the side effects are still manifested, the actions of the parents should depend on the characteristics of the reaction. For example, if a child has a fever, you should give a crush antipyretic medicine (for example, Nurofen).

With a slight redness or soreness of the vaccine injection site, no special actions are needed. You can bathe the child, but you should not treat the injection site with an antiseptic (like applying a plaster or a compress).

If the child’s condition worsens or the reaction to the vaccine is more pronounced (for example, the child limps after vaccination, his leg hurts badly, he doesn’t sleep well or has an acute respiratory disease), the baby must be shown to the pediatrician.

The doctor will examine and determine whether complications have occurred, and also prescribe the necessary treatment to correct the effects of the injection.

The drug is a white suspension, placed in a volume of 0.5 ml in a disposable glass syringe, to which an injection needle is attached (the syringe is sealed in plastic).

The contents of the syringe are usually homogeneous, but the appearance of a white precipitate is also considered normal. One syringe is usually sold in one box, but there are also packages containing 5 syringes each. Symptoms of affection disorders in children 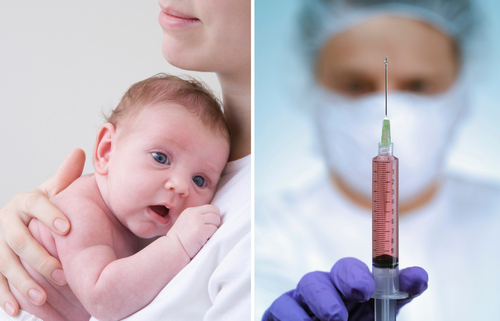