Klacid and Azithromycin are two effective antibiotics. Together, these drugs are prohibited. Also, in the treatment of the above infections, you can not switch from Klacid to Azithromycin, and vice versa.

The bioavailability of azithromycin is lower than that of clacid. The use of Klacid is recommended for gastritis and peptic ulcer, as it has a better effect on Helicobacter pylori. Also, the drug is superior to Azithromycin in the treatment of diseases caused by streptococci, pneumococci and staphylococci.

Azithromycin is effective in diseases caused by Pseudomonas aeruginosa and enterobacteria. It is convenient to use, which involves a single use of the drug per day. It is excreted longer than Klacid. In two days, only half the substance leaves. However, despite this, side effects are less common than with Klacid. Klacid is also more effective in treating chronic infections.

The following advantages of Klacid can be distinguished:

However, the drug is not recommended for use during pregnancy. Also, the reception is prohibited for kidney diseases, since its elimination slows down. And another significant drawback is that its use is prohibited for babies up to 6 months.

Azithromycin has the following positive aspects:

However, compared with Klacid, it has a low bioavailability, as well as a long time of elimination from the body.

Thus, both medicines are effective. However, antibiotics should be prescribed by a doctor. Only he will be able to determine which of the drugs is best suited in a particular case. Any antibiotics should be taken with caution and according to a specific treatment regimen. Improper use can lead to side effects and deterioration.

Klacid and Azithromycin are antibacterial drugs belonging to the macrolide group . Affect most pathogens. Often used in modern medicine. Since the mechanism of action is the same, patients often can not decide on the choice of drug.

Semi-synthetic antibiotic of the macrolide group. Available in the form of tablets and powder for suspension. The active substance in tablets is clarithromycin 250 and 500 mg. In 5 ml of the prepared suspension of 60 ml, there is 125 mg of active.

It has a bacteriostatic and antibacterial effect. The active substance is released during passage through the digestive tract. Upon release, only 50% of the active substance is absorbed. It is excreted by the kidneys. The antibiotic is active not only for standard laboratory bacteria, but also for isolated strains during clinical practice. Destroys most aerobic and anaerobic bacteria.

It is applied when:

It is used with caution in case of impaired liver and kidney function. It cannot be used simultaneously with Terfenadine, Cisapride, Pimozide, Ergotamine, and Astemizole.

Pregnancy is not recommended. During lactation, you should exclude taking the drug or stop breastfeeding, since the active substance is excreted in breast milk. Eating does not affect the use of the medicine.

For adults, a daily dose of 250 mg of clarithromycin. If complicated diseases are treated, the dosage is increased to 500 mg. The duration of treatment is from 5 to 14 days. Suspension is prescribed for children. To prepare the suspension, gradually pour water to the mark, and then shake. The daily dose is calculated as follows: 7.5 mg per 1 kg of weight. Treatment lasts  5-10 days.

One of the most popular antibiotics to date. It belongs to the macrolide group. The active substance is azithromycin. Available in the form of tablets in a dosage of 125, 250 and 500 mg. The suspension powder has a dosage of 15, 30 and 75 mg. 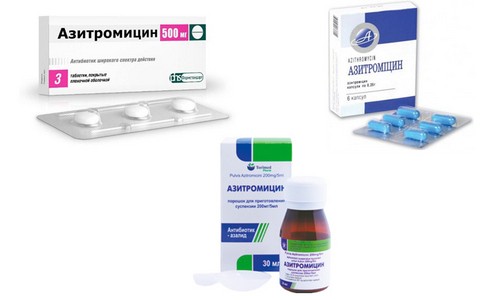 The antibiotic blocks the production of proteins, which helps to stop their reproduction. It has bacteriostatic and bactericidal action. Half of the active substance is excreted in 50 hours from the body. Despite this, it is absorbed into the blood quickly enough and reaches a maximum concentration 2.5 hours after administration.

Azithromycin also has a number of contraindications, which include:

Reception of the drug is often carried out according to the scheme: one dose of the drug at a dosage of 500 mg per day. It is recommended to be taken after 24 hours at about the same time. The duration of treatment is 3-5 days. Children from 12 years old are prescribed 3 tablets of 500 mg for 3 days. For children under 12 years of age and weighing less than 45 kg, a suspension is prescribed. It is taken at the rate of 10 mg / kg per day. Duration is also 3 days. 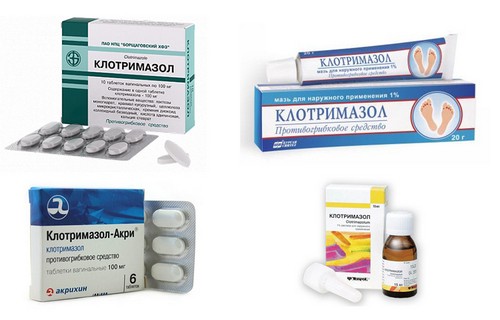