When Elizabeth Graham woke up the morning after the festive get-together she felt like she had downed 20 drinks – not the five she’d enjoyed.

A mother who thought she had a hangover from her work Christmas party was devastated to discover it was cancer. When the lethargic and achy feeling still hadn’t shifted a day later, the 33-year-old visited her doctor and was given a blood test – which revealed that she had leukaemia.

Just a week before December 25, Mrs Graham, of Paisley, Scotland, started gruelling chemotherapy treatment, which kept her in hospital until the end of January.

‘I was up on the dance floor for most of the work do,’ she said. ‘I’m not a massive drinker but still had a good night on five drinks.

‘When I woke up the next morning, I thought I had a terrible hangover, but it wouldn’t seem to shift. I couldn’t believe two days later I was diagnosed with cancer.’

Elizabeth Graham, 33, felt like she’d downed 20 drinks next morning when she’d only had five.

When the lethargy and achy feeling still hadn’t shifted a day later, she visited her doctor.

A blood test revealed that she had leukaemia, which needed urgent treatment.

In the run up to her diagnosis, the administrative supervisor developed a small rash on her thighs. Having had the same unusual symptom whilst pregnant with her son George, now five, she told her manager husband Charles, 40, that she thought she may be expecting again.

She said: ‘I’d been feeling really run down, almost like I had a cold. Everything felt like an effort.’

Deciding she should take a test before her office party, she hoped to see the two magic blue lines.

‘Having gone through fertility treatment with George, the prospect of having another one naturally was amazing,’ she explained.

‘I knew if I was going to the Christmas do, I wouldn’t want to be drinking if I was expecting, but I did two tests at home, and they both came back negative.

‘I was disappointed as I hoped it might explain why I wasn’t feeling right.’

Mrs Graham tried to get in the festive mood and went on her work do on December 12. The annoying rash she’d had in the days before worsened at the party but she tried to ignore it and enjoy herself.

But the next morning she woke up feeling unwell, like she had a bad hangover.

‘I felt like I’d had 20 drinks, not five,’ she explained. ‘I couldn’t move and felt totally exhausted.’

Having had a ‘duvet day’ watching Disney films with George, Elizabeth still felt no better by the evening. Mrs Graham had acute promyelocytic leukaemia (APL) which progresses rapidly.

Worried, Mr Graham suggested she take the next day off work, and go to see a doctor.

‘I went to my GP and said I had a terrible rash, felt exhausted, really bloated like I’d eaten a huge festive roast, and I had an abscess in my mouth too.’

Straight away, Mrs Graham’s doctor ordered a blood test, and she was told the surgery would call her with the results.

After she returned to work the next day, within an hour she got a phone call that changed everything.

‘Charles rang and said the surgery had been in touch,’ she said. ‘They wanted me to get to the Royal Alexandra Hospital in Paisley as soon as possible.

‘I had no idea what was happening, but as soon as I got to my car to drive there I was hysterical, so Charles came to collect me whilst my mother-in-law Pamela picked George up from nursery.’

After five months of treatment, the administrative supervisor, shown here with son George, got the all-clear.

Because there was a risk of a serious – possibly fatal – bleed because the condition can interfere with the blood clotting system, she was told she would need to start treatment straight away, meaning she’d spend Christmas in hospital.

She said: ‘I hadn’t even wrapped all my presents, I was supposed to be hosting Christmas that year and had a freezer full of Asda food. My mind went into planning and panic mode.

‘I also didn’t know how George, who was only three at the time and is non-verbal autistic, would cope without his mum. And really how I would cope with being away from my family.’

WHAT IS ACUTE PROMYELOCYTIC LEUKAEMIA?

Leukaemia is cancer of the white blood cells. Acute leukaemia means the condition progresses rapidly and aggressively, requiring immediate treatment. Acute promyelocytic leukaemia (APML) is a rare form of the Acute Myeloid Leukaemia (AML), the form of the disease which affects the myeloid cells.

APML accounts for around 10 -15 per cent of all cases of AML. The myleloid cells perform a number of different functions, such as fighting bacterial infections, defending the body against parasites and preventing the spread of tissue damage.

In APML a change in a specific chromosome leads to a changes in white blood cells called Promyelocyte cells, which means they do not progress to maturity.

This leads to a bleeding disorder due to abnormal clotting. The symptoms include pale skin, tiredness, breathlessness, frequent infections, and unusual and frequent bleeding, such as bleeding gums or nosebleeds.

The main treatment for AML is chemotherapy, which is used to kill as many leukaemia cells in your body as possible and reduce the risk of the condition coming back (relapsing). In some cases, intensive chemotherapy and radiotherapy may be needed, in combination with a bone marrow or stem cell transplant, to achieve a cure.

Studies have shown that people with acute promyeloid leukaemia (APML), around 85 per cent will live for at least five years with treatment.

Transferred to Beatson West of Scotland Cancer Centre in Glasgow, Mrs Graham underwent a bone barrow test to confirm her cancer type before she began her first of four cycles of chemotherapy on 17 December – just eight days before Christmas.

She tucked into a hospital Christmas lunch before her family, including their son and her and her husband’s parents, arrived.

She said: ‘I love Christmas – the lights and the magic of it – but instead of being with my family at home, I was lying in a hospital bed with my son opening his presents from a black bin liner my husband had brought them in in.

‘I was in so much pain that I didn’t want to live any more. But the thought of seeing my son again got me through.’

After seven days of chemotherapy, Elizabeth had to stay in hospital for another four weeks as her immune system was dangerously low.

Then, at the end of January she was discharged and told she would need more rounds of chemo every month until April.

After staying in the Beatson West of Scotland Cancer Centre again for another two weeks during her third round of chemotherapy, Mrs Graham and her family were over the moon when, in April 2016, she was told she was cancer-free.

‘I have had a lot of support from the cancer charity Cancer Research UK. It helped me feel like I am not alone,’ she said.

‘I’ve had a positive attitude throughout all this, and just thinking of my son and my husband pulled me through.’ 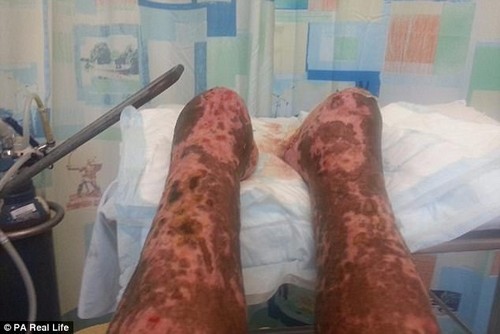 Man developed sepsis and will lose legs after dog scratch