The choice of therapy for arrhythmias is determined by the causes, the type of cardiac rhythm and conduction disturbance, and the patient’s condition. In some cases, to restore normal sinus rhythm, it is enough to treat the underlying disease.

Sometimes a special medical or cardiac surgery treatment is required for the treatment of arrhythmias. Selection and appointment of antiarrhythmic therapy is carried out under systematic ECG control.

According to the mechanism of action, 4 classes of antiarrhythmic drugs are distinguished:

Non-drug treatments for arrhythmias include pacing, cardioverter-defibrillator implantation, radiofrequency ablation, and open-heart surgery. They are performed by cardiac surgeons in specialized departments. Implantation of a pacemaker (EX) – an artificial pacemaker is aimed at maintaining a normal rhythm in patients with bradycardia and atrioventricular blockages. For preventive purposes, implanted cardioverter-defibrillator is sutured to patients who have a high risk of sudden onset of ventricular tachyarrhythmias and automatically performs cardiac stimulation and defibrillation immediately after its development.

Using radiofrequency ablation (RFID of the heart) through small punctures with the help of a catheter, cauterization of a part of the heart that generates ectopic impulses is carried out, which makes it possible to block impulses and prevent the development of arrhythmia. Open heart surgery is performed for cardiac arrhythmias caused by aneurysm of the left ventricle, valvular heart disease, etc.

The term “arrhythmias” unites disorders of nucleation and conduction of electrical impulses of the heart, different in their mechanism of occurrence, manifestations and prognosis. They arise as a result of disorders of the cardiac conduction system, ensuring consistent and regular contractions of the myocardium – sinus rhythm.

Arrhythmias can cause severe disturbances in the activity of the heart or the functions of other organs, as well as themselves being complications of various serious pathologies. They manifest a sensation of palpitations, interruptions, heart fading, weakness, dizziness, pain or pressure in the chest, shortness of breath, fainting. In the absence of timely treatment, arrhythmias cause angina attacks, pulmonary edema, thromboembolism, acute heart failure, cardiac arrest.

Arrhythmia is any violation of the regularity or frequency of the normal heart rhythm, as well as the electrical conductivity of the heart. An arrhythmia may be asymptomatic or may be felt in the form of a heartbeat, fading or interruptions in the work of the heart. Sometimes arrhythmias are accompanied by dizziness, fainting, pain in the heart, a feeling of lack of air. Arrhythmias are recognized in the process of physical and instrumental diagnostics (heart auscultation, ECG, CPECG, Holter monitoring, stress tests). In the treatment of various types of arrhythmias, medical therapy and cardiac surgery methods (RFA, pacemaker, cardioverter-defibrillator) are used.

According to statistics, violations of conductivity and heart rate in 10-15% of cases are the cause of death from heart disease. The study and diagnosis of arrhythmias is carried out by the specialized section of cardiology – arrhythmology. Forms of arrhythmias: tachycardia (rapid heartbeat more than 90 beats per minute), bradycardia (slowed heartbeat less than 60 beats per minute), extrasystole (extraordinary heart contractions), atrial fibrillation (chaotic contractions of individual muscle fibers), blockade of the conducting system, etc..

Rhythmic sequential contraction of the heart is provided with special myocardial muscle fibers, which form the cardiac conduction system. In this system, the driver of a rhythm of the first order is the sinus node: it is in it that the excitation is generated with a frequency of 60-80 times per minute. Through the myocardium of the right atrium it spreads to the atrioventricular node, but it turns out to be less excitable and gives a delay, therefore the atria are reduced first and only then, as the excitation spreads through the bundle of His and other parts of the conducting system, the ventricles.

Thus, the conduction system provides a certain rhythm, frequency and sequence of contractions: first the atria, and then the ventricles. The defeat of the myocardial conduction system leads to the development of rhythm disturbances (arrhythmias), and its individual links (atrioventricular node, bundle or His foot) – to conduction disturbances (blockade). At the same time the coordinated work of auricles and ventricles can sharply be broken.

For reasons and the mechanism of occurrence of arrhythmias conditionally divided into two categories: having a connection with cardiac pathology (organic) and not related to it (inorganic or functional). Various forms of organic arrhythmias and blockades are frequent companions of cardiac pathologies: ischemic heart disease, myocarditis, cardiomyopathies, malformations and injuries of the heart, heart failure, as well as complications of cardiac surgery.

The basis of the development of organic arrhythmias are damage (ischemic, inflammatory, morphological) of the heart muscle. They impede the normal propagation of an electrical impulse through the cardiac conduction system to its various parts. Sometimes the damage affects the sinus node – the main pacemaker. During the formation of cardiosclerosis, the scar tissue prevents the realization of the conductive function of the myocardium, which contributes to the appearance of arrhythmogenic foci and the development of conduction and rhythm disturbances.

The etiological, pathogenetic, symptomatic and prognostic heterogeneity of arrhythmias causes debate about their unified classification. Anatomically, arrhythmias are divided into atrial, ventricular, sinus and atrioventricular. Taking into account the frequency and rhythm of heart contractions, it was proposed to distinguish three groups of rhythm disturbances: bradycardia, tachycardia and arrhythmia.

The most complete is the classification based on the electrophysiological parameters of rhythm disturbances, according to which arrhythmias are distinguished:

Nomotopic arrhythmias are caused by impaired automatism of the sinus node and include sinus tachycardia, bradycardia and arrhythmia.

Separately, in this group emit syndrome of weakness of the sinus node (SSS).

Heterotopic arrhythmias are characterized by the formation of passive and active ectopic myocardial excitation complexes, located outside the sinus node.

With passive heterotopic arrhythmias, the occurrence of an ectopic impulse is due to a slowing down or disruption of the conduction of the main impulse. Passive ectopic complexes and rhythms include atrial, ventricular, disorders of the atrioventricular connection, migration of supraventricular pacemaker, pop-up contractions.

This group of arrhythmias occurs as a result of the reduction or cessation of the propagation of a pulse through a conducting system. Conduction disorders include: sinoatrial, intra-atrial, atrioventricular (I, II and III degrees) blockade, syndromes of premature ventricular arousal, intraventricular blockade of the bundle of the bundle of His (one-, two-and three-beam).

Manifestations of arrhythmias can be very different and are determined by the frequency and rhythm of heart contractions, their effect on intracardiac, cerebral, renal hemodynamics, as well as myocardial function of the left ventricle. There are so-called “dumb” arrhythmias that do not manifest themselves clinically. They are usually detected by physical examination or electrocardiography.

The main manifestations of arrhythmias are the heartbeat or the sensation of interruptions, fading during the work of the heart. The course of arrhythmias may be accompanied by asphyxiation, angina pectoris, dizziness, weakness, fainting, and the development of cardiogenic shock.

In extrasystoles, patients complain of feelings of fading, tremors and interruptions in the work of the heart. Paroxysmal tachycardia is characterized by sudden developing and terminating bouts of heartbeat up to 140-220 beats. in minutes Feelings of frequent, irregular heartbeat are noted with atrial fibrillation.

The course of any arrhythmia can be complicated by ventricular fibrillation and flutter, which is equivalent to the arrest of blood circulation, and lead to the death of the patient. Already in the first seconds dizziness, weakness develop, then – loss of consciousness, involuntary urination and convulsions.

With complete atrioventricular block or asystole, syncopal states (Morgagni-Adems-Stokes attacks characterized by episodes of loss of consciousness) may develop, caused by a sharp decrease in cardiac output and blood pressure and a decrease in the blood supply to the brain. Thromboembolic disorders in atrial fibrillation in every sixth case lead to cerebral stroke.

The primary stage of diagnosis of arrhythmia can be carried out by a general practitioner or cardiologist. It includes the analysis of the patient’s complaints and the determination of the peripheral pulse characteristic of cardiac arrhythmias. At the next stage, instrumental non-invasive (ECG, ECG monitoring), and invasive (CPEPI, VEI) research methods are conducted:

An electrocardiogram records heart rhythm and frequency over several minutes, so only permanent, persistent arrhythmias are detected by means of an ECG. Rhythm disturbances that are paroxysmal (temporary) are diagnosed by the Holter 24-hour ECG monitoring method, which records the circadian rhythm of the heart.

To identify the organic causes of arrhythmias, echocardiography and stress echocardiography are performed. Invasive diagnostic methods can artificially cause the development of arrhythmia and determine the mechanism of its occurrence. During intracardiac electrophysiological examination, catheter electrodes are applied to the heart, recording endocardial electrogram in various parts of the heart. Endocardial ECG is compared with the result of recording an external electrocardiogram performed simultaneously.

The tilt test is performed on a special orthostatic table and simulates conditions that can cause arrhythmia. The patient is placed on a table in a horizontal position, pulse and blood pressure are measured, and then after administration of the drug the table is tilted at an angle of 60-80 ° for 20-45 minutes, determining the dependence of blood pressure, heart rate and rhythm on the change in body position.

A number of auxiliary diagnostic tests include tests with a load (step tests, test with squats, marching, cold and other tests), pharmacological tests (with isoproterinol, with dipyridomol, with ATP, etc.) and are performed to diagnose coronary insufficiency and the possibility of judging connection of the load on the heart with the occurrence of arrhythmias.

In terms of prognosis, arrhythmias are extremely ambiguous. Some of them (supraventricular extrasystoles, rare extrasystoles of the ventricles), not associated with organic heart disease, do not pose a threat to health and life.

The most severe arrhythmias are flutter and ventricular fibrillation: they represent an immediate threat to life and require resuscitation.

It is recommended to limit the use of stimulants (caffeine), exclude smoking and alcohol, self-selection of anti-arrhythmic and other drugs. 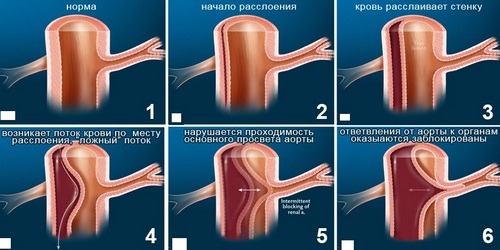 One thought on “Arrhythmia Treatment”