Inflammation in the joints is considered only one of the signals of the appearance of a disease caused by either an infection or an excessively active activity of the immune system, which takes the cells of one’s own body as enemy agents.

About 2% of people worldwide suffer from various types of arthritis. Arthritis often begins at a young age, up to 40 years. Arthritis is not only inflammation of the joints (as, for example, arthrosis), it is an inflammatory process of the whole organism.

Sometimes arthritis speaks of a metabolic disorder, which, by the way, can be restored with folk recipes at home (most importantly, consult a doctor before that).

In addition to the above reasons, arthritis (secondary) can be caused by lupus erythematosus, hepatitis, psoriasis, etc. Allergic arthritis is usually triggered by a reaction to medications, and traumatic arthritis is caused by joint injuries.

Symptoms of the disease in the knee joint

It is difficult to accurately describe the symptoms of arthritis, because they vary depending on the cause that caused them and on the specific location. Acute gonitis, in contrast to chronic, begin suddenly and are accompanied by severe intoxication. However, there are a number of symptoms that are characteristic of arthritis of the knee joint of any etiology.

Symptoms of gonitis have several stages:

Pain. It is the first symptom of arthritis of the knee joint. In the first stages, it is periodic inaccurate localization in the front of the knee. It occurs after physical exertion, in particular, during flexion and extension of the knee, when the most tendon tension occurs. 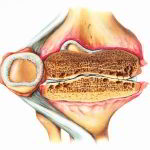 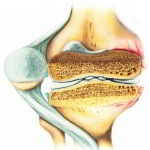 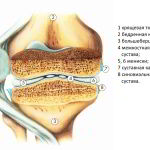 The pain can be quite acute and intense after sleep, prolonged rest, while walking fast. In the morning, some patients are concerned about stiffness in the knee joints, which disappears during the day. If the cause of arthritis is an infection, the pain seems unbearable. Over time, the progression of the disease becomes constant.

Swelling. It is a manifestation of inflammation. The joint swells, increases in volume, and the skin above it becomes red (hyperemic) and hot to the touch, which indicates an inflammatory process in the joint.

And finally, the joint is deformed. It occurs in response to pain due to reflex muscle spasm. Due to the constant location of the joint in the wrong position, it is fixed in it – and there is a persistent restriction of mobility. The patient often gives the foot a half-bent position. This leads to joint ankylosis (limited mobility), as well as muscle weakness in the affected area.

The acute course of arthritis of the knee joint is characterized by an increase in body temperature, the appearance of chills. There is a risk of the spread of purulent exudate (fluid resulting from inflammation) in the thigh and lower leg.

Some types of arthritis can cause extra-articular symptoms, which are expressed in diseases of the eyes, lungs, heart, kidneys, gastrointestinal tract, kidneys, blood vessels.

Arthritis of the knee joint is characterized by a prolonged course with alternating exacerbations and remissions. Can it be cured?

How to treat knee arthritis?

Treatment of gonitis should be comprehensive.

The treatment includes the following elements:

Non-steroidal anti-inflammatory drugs (NSAIDs) are considered basic in the treatment of arthritis of the knee joint and have an analgesic, antipyretic, anti-inflammatory effect. They reduce fever and inflammation. Such drugs include the well-known aspirin, paracetamol, ibuprofen, naproxen and ortofen. Among the drugs of the new generation, admiral, olfen, rheumatic drugs, nimesulide are distinguished. True, these funds have the same side effects as the “old”. Simple or synthetic analgesics are also used.

At the same time, flurbiprofen, diclofenac, indomentacin are considered the most effective drugs with a pronounced anti-inflammatory effect for the treatment of arthritis. But ibuprofen, naproxen and aspirin relieve inflammation worse.

Chondroprotectors – tablets that “protect” the joints. These drugs protect the cartilage tissue and enhance its formation in the joints. They not only remove the symptoms of arthritis, but also improve the nutrition of cartilage, which improves its recovery. They are necessary in the treatment of arthritis, because they are extremely effective. The active substances of such drugs are glucosamine, chondroitin, sulfate. In various combinations, they are part of Don, Chondroxide, Arthra, Chondroitin, Structum, Elbona and other drugs.

Their reception is carried out under the supervision of a physician and should be regular – application from case to case will not have the desired effect.

Vitamins C and B, as well as immunostimulants (levamisole, tactivin) contribute to the strengthening of metabolic processes in all body tissues, including the affected joint. Vitamins are used for a long time with constant monitoring of blood and urine tests. They also use (depending on the nature of arthritis) anti-tuberculosis, anti-tumor drugs, antibiotics. It is important to consider that only a knowledgeable doctor can prescribe such medicines, because often incorrectly selected tablets not only do not have the proper effect, but also make it worse.

Physiotherapeutic procedures and physiotherapy exercises. Physiotherapeutic procedures, as well as massage, can be performed during the period of remission (remission) of the disease. Apply such procedures as phonophoresis with hydrocortisone, magnetotherapy, UHF, paraffin. These procedures (by the way, against the background of massage) are performed in conjunction with therapeutic exercises. The most popular exercises include a bicycle, a bridge, and a butterfly. Exercise therapy for arthritis of the knee joint will not cure it, but will strengthen the ligament-muscle corset, and also positively affect the development of the disease itself. Exercise should not cause severe pain. It is recommended to do it in the morning.

An important role is played by the weight of the patient. If a person has extra pounds, they accelerate the development of the disease, since the load on the diseased joint is increased. So, weight correction plays a huge role in the treatment – a diet for arthritis of the knee joints should be prescribed by a doctor, especially if it needs to be adjusted taking into account concomitant diseases – food allergies, cholecystitis, etc.

Ointments and creams for use

Doctors often advise patients who do not have synovitis (inflammation of the synovial membrane of the joint with the formation of exudate) warming ointments to improve blood circulation in the joint. They rarely cause any side effects. Among such ointments are Espol, Gevkamen, Menovazin. If synovitis occurs, then ointments with an anti-inflammatory effect are prescribed – Voltaren-gel, Fastum, Dolgit, etc.).

Of course, the ointment is not able to cure a sick knee, but it can significantly reduce pain in it, ease the patient’s condition.

A diet for arthritis of the knee joint is an important aspect of treatment. It is prescribed in order to reduce the patient’s excess weight (if any) and improve the condition of diseased joints. In this case, you need to “sit” on a diet carefully so as not to lose the necessary potassium and calcium (this can provoke cardiac convulsions and osteoporosis).

Patients are advised to eat steamed, boiled or stewed dishes. The main role in the diet should be played by vegetable (buckwheat porridge, lentils, beans) and animals (lean meat and fish) proteins. It is also necessary to consume fermented milk products.

It is believed that with arthritis, bone broth prepared in the form of jelly and jelly is able to help, because it contains collagen in its composition. And edible gelatin, in turn, restores cartilage.

Carbohydrates found in fruits and vegetables are also essential for the body. In addition, they provide an energy reserve without fatty deposits.

Of course, fats play an important role in the diet, but vegetable fats and butter should be consumed predominantly.

Many women are worried about the question, is it possible to cure arthritis of the knee joint at home with folk remedies? They can have an even better effect than many expensive medicines, simple recipes called folk.

The treatment of arthritis with drugs, ointments, exercises, folk recipes and diet should be agreed with your doctor. The importance of calcium 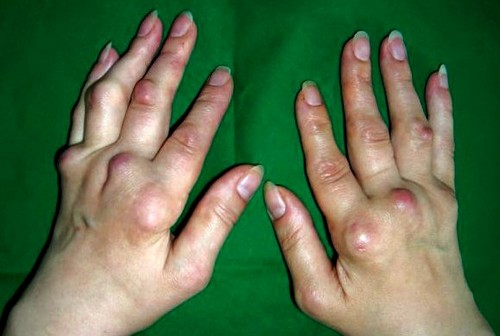 Classification and manifestations of deforming polyosteoarthrosis