At 17 years old Daniella was fitted with a temporary breast expander – a bag inserted into the breast and filled with a saline solution every six months – with the hope of full breast implant at 21.

A woman whose condition saw her only develop one breast has dropped five stone after doctors warned she was too obese for corrective surgery.

Daniella Day, 23, from Nottingham, was diagnosed with a congenital breast deformity at the age of 16 – something that caused her to have one breast a size DD and the other a cup size A.

Her confidence plummeted and after being nicknamed ’tissue t***’ by cruel bullies at school as she tried to disguise her uneven boobs with tissue, she began to comfort eat.

Daniella Day’s breast deformity saw her develop one much larger than the other and after being told she was too obese for surgery she dropped five stone in as many months. Pictured: Daniella at her heaviest (left) and today (right)

But after ballooning to a size 18 while at university due to binging on takeaways, crisps and chocolate, she was later told she was obese and that the operation would be too risky.

Daniella decided to ditch her unhealthy habits and after joining Cambridge Weight Plan in May she lost a total of five stone in just five months.

Now, at a svelte size 10, she is finally ready for the next stage of her surgery which she hopes will take place next year.

Daniella said: ‘Not having my left breast left me feeling so self-conscious that I turned to food for comfort.

‘It wasn’t until I went back to the hospital at 21 and was told that I was too overweight for the next part of my surgery that I realised I needed to change my ways.

‘When I was 17 I had an operation to have a bag inserted into my breast that would be filled with a saline solution as my right side grew. In May she joined the Cambridge Weight Plan swapping her greasy takeaways for lighter meals

‘But it was never permanent and I knew one day I’d need another operation to have the implant.

‘I’d spent years stuffing my bras with tissue at school and as soon as someone spotted me I was known as ’tissue t***.’

‘No one could understand that I was just trying to look normal and didn’t care about them looking any bigger.

‘I joined Cambridge Weight Plan in May and after losing one stone on my own and have since lost another four stone.

‘I didn’t mind my boobs when I was chubby as being overweight gave them a better shape but now I have just been left with excess skin.

‘I’m hoping to have the final part of my surgery next year now I have finally lost all my weight.’

Daniella first realised her breasts weren’t growing the same age 15 and after nagging her mum for a doctor’s appointment, she was finally referred.

‘I remember saying to my mum that they don’t look normal and after being referred, I was soon diagnosed with a tissue deformity.

‘At one point my breasts four sizes apart and it was really noticeable unless I used extra padding or tissue in the one side of my bra.

‘I felt like I was too young to be going through such a huge operation at 17 but I knew it needed to be done.

‘At 21 I knew I was chubby but I never imagined I’d be too obese for the second part of the surgery.

‘It was the wake-up call I needed, I wasn’t happy with my appearance but I was the only person able to change it.’

Daniella decided to join Cambridge Weight Plan in May this year and after losing a total five stone, she’s now set for surgery.

She added: ‘I joined in May after I’d heard so many success stories from people around me.

‘I knew I needed to get my life back on track and I stopped going out with friends and ditched the fast food, crisps, and chocolate for good.

‘Your weight is the one thing you can control so why let it hold you back?’

Daniella now weighs just over 10st and she’s set to have her surgery next year.

She said: ‘My breast reconstruction was going to be funded by the NHS as it was the second part to my first surgery at 17 but now I will have to apply for a whole new set of funding.

‘The expander in my left breast will be taken out soon as my body is now rejecting it butonce I’m all healed from that op, I will start my application.

‘After losing all the weight I’m now one step closer to having the breasts I’d always wanted.

‘At the moment they are like empty sacs due to the weightloss and my condition.

‘If the funding isn’t granted, I will start saving for private surgery to correct my bust.’ 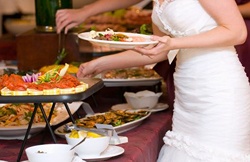 Drunk tanks could be rolled out across the NHS