A baby boy is celebrating his first birthday today with a smile on his new face after a complex surgery removed a large mass that covered his eyes and nose.

Zakary Riegel was born with a rare condition that caused brain tissue to grow in between his eyes and outside of his face to form a large balloon-like cyst.

After his first four months of life were spent in Cincinnati Children’s Hospital, he underwent dangerous life-altering brain surgery to remove the mass that allowed his 46-year-old mother Valeka, a surgical nurse, see her son’s face for the first time.

Now the one-year-old is beginning to reach milestones such as crawling and standing, though he is at a greater risk of developmental disorders and seizures. 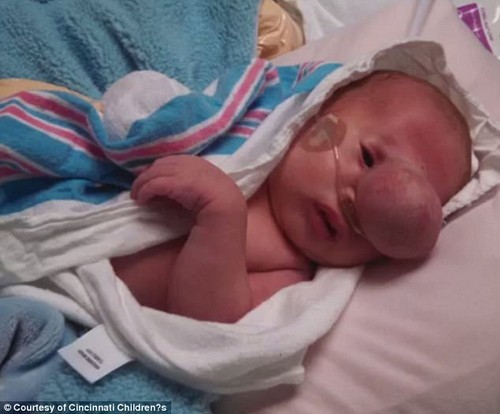 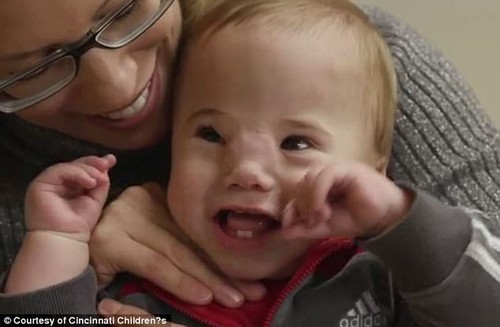 When Valeka was five months pregnant with her third son Zakary, a fetal MRI and ultrasound revealed that a tube in his brain had not closed which meant he had encephalocele.

Doctors told Valeka her son would most-likely be born with a cyst on his cheek, yet the outcome was far worse.

He was born with a balloon-like pouch made up of tissue and brain matter that covered his face from his eyes to his mouth.

Encephalocele is a rare birth defect that occurs when the neural tube, a channel that forms the brain and spinal cord, does not completely close as it should in the third and fourth weeks of pregnancy.

This results in an opening in the area of the skull between the forehead and nose or the back of skull where parts of the brain grow outward.

It is not known what causes the genetic condition that affects one in 12,000 babies in the US.

Encephalocele is a rare type of neural tube defect (NTD) present at birth that affects the brain.

The neural tube is a narrow channel that folds and closes during the third and fouth weeks of pregnancy to form the brain and spinal cord.

Encephalocele is described as a sac-like protrusion or projection of the brain and the membranes that cover it through an opening in the skull.

Encephalocele happens when the neural tube does not close completely during pregnancy.

The result is an opening in the midline of the upper part of the skull, the area between the forehead and nose, or the back of the skull.

Usually encephaloceles are found right after birth, but sometimes a small encephalocele in the nose and forehead region can go undetected.

How rare is it?

Center for Disease Control and Prevention estimates that each year about 340 babies or one in 12,000 in the United States are born with encephalocele.

There is a genetic component to the condition, meaning it often occurs among families with a history of spina bifida and anencephaly.

Some researchers also believe that certain environmental exposures before or during pregnancy might be causes, but more research is needed.

When Zakary was born last December, he and his mother were immediately separated into two different hospitals because of Zakary’s condition and Valeka was bleeding excessively from the birth.

Valeka wrote an open-letter to her son where she said: ‘I saw you only for a second, because I hemorrhaged and was immediately intubated by the ICU team. They saved my life, while you were down the street fighting for yours.’

The mass restricted Zakary’s breathing requiring him to stay in the neonatal intensive care for nearly five months until he was big enough to undergo surgery.

‘I could not see your face, only a large protrusion and tiny little lips – no eyes, no nose, no eyelashes. Yet, you were still beautiful to me,’ Valeka wrote.

At four and a half months, Zakary weighed the desired 15 pounds to undergo a challenging procedure to remove part of his brain, close the opening in his skull and do so delicately to reduce bleeding and swelling that could cause long-term brain damage.

He underwent a cranitomy, a surgical operation where a bone flap is removed from the skull to access the brain.

During the same surgery doctors removed the mass and sealed the hole in his skull that had caused the sac-like protrusion in the front of his head.

Dr Stevenson said before the surgery he quickly phoned a friend because ‘I knew we would need a complex reconstruction of his face and the nasal bridge to make it work.’

He said: ‘The techniques we used were relatively routine but the presentation and the rarity of these conditions made it an interesting patient to work with.’

After nine hours in the operating room, Zakary was in the pediatric intensive care unit on a breathing tube while the swelling in his brain went down.

Valeka wrote: ‘For the first time I saw your face! You have two beautiful brown eyes, with long fluffy, eyelashes and eyebrows. You even had a little button nose and perfectly shaped lips. Your scars were minimal but your swelling was quite overwhelming.’

According to his mother, Zakary was pulling out his IVs which was a sign he was ready for his breathing tube to be taken out.

‘The first thing he did after extubation was smile, and 23 hours later he was out of the pediatric ICU,’ Valeka said.

Zakary now has a higher risk of developmental disorders and seizures due to the invasive surgery on his brain, but Valeka said she is focusing on the present as her son is progressing each day. 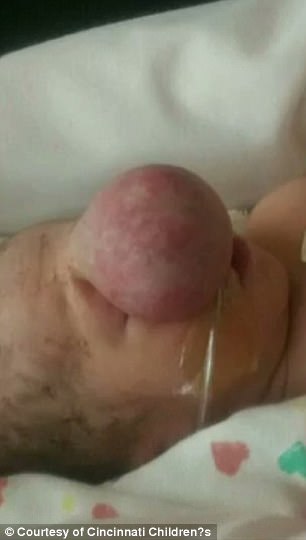 Zakary suffers from encephalocele, a rare condition where a tube in the brain does not fully close causing brain tissue to grow outward either in the front or back of the head

His mother Valeka, 46, said her son is now starting to reach milestones including crawling and standing and will hopefully begin verbalizing soon 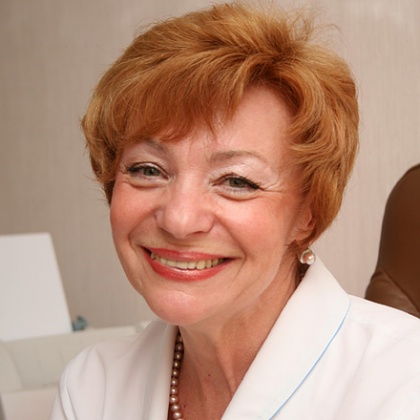 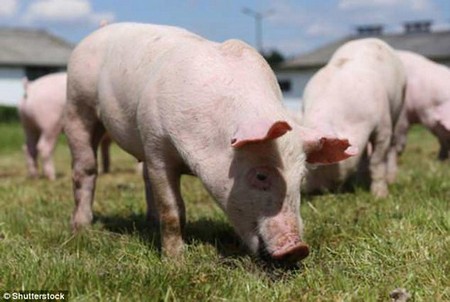