The virus lingering in a person’s semen has led researchers to think the condition could be passed on during sex even after the person has recovered.

Dengue fever, a tropical illness caused by mosquito bites could be passed on through sex, a study has found. For the first time scientists have found the virus that causes the fever in the semen of a man, more than a month after he fell ill while travelling in Thailand.

Although adults usually only have mild flu-like symptoms such as a headache, fever and muscle or joint pain, between one and two per cent of dengue fever cases progress to severe dengue, which can be fatal.

The study is thought to be the first instance of the virus being recorded in the male genitals, and suggests dengue fever could be transmitted during sexual intercourse. There is currently no cure for the virus but it isn’t naturally found in the UK.

It is most commonly caught by people travelling to hotter climates such as southeast Asia, Africa, Australia, the Caribbean and South and Central America.

WHAT IS DENGUE FEVER?

Dengue fever is a viral disease spread only by certain mosquitoes – mostly Aedes aegypti or ‘dengue mosquitoes’, which are common in tropical areas around the world. Aedes aegypti are not normally infected with the virus, unless they have bitten a person sick with dengue.

There are four types of dengue virus, numbered 1 to 4. After infection, a person is immune only to that particular type. Further infections with a different type have a higher chance of severe or complicated dengue.

The study, published in journal Eurosurveillance, documented the case of an Italian man in his 50s diagnosed with dengue fever after returning from Thailand in January. He was otherwise healthy but suffered from joint pain, fatigue and nausea during the illness.

The discovery led scientists to think the virus could be transmitted by sexual intercourse, in the same way the ZIKA virus is known to do.

Previously it was believed that the virus was normally transmitted through a biting insect such as a mosquito or a tick, though some medical procedures and breast feeding could also spread the virus.

Researchers said: ‘To our knowledge, the presence and persistence of DENV [dengue fever] in the male genital tract has never been reported so far.

‘Our findings highlight the possibility of sexual transmission of DENV that could play a role in the spreading of infection in non-endemic areas.

‘However, no such events have been reported to date despite that fact that in 2016 alone, 2,601 travel-associated dengue cases were reported to The European Surveillance System at the European Centre for Disease Prevention and Control.’

They added that further studies were needed.

Dengue fever outbreaks are usually spread when people are bitten by mosquitoes that have bitten other people with the fever. They are not uncommon in popular tourist destinations and there was an outbreak in North Queensland in Australia last month, and in the Canary Islands in December.

The best way for travellers to protect themselves from the condition is to avoid being bitten by mosquitoes by covering up with loose clothing and using a mosquito repellent. 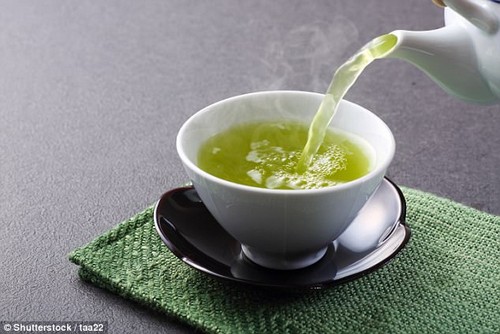 The 11 foods that will help you sleep better tonight