Children’s aphasia is a group of polyetiological disorders of the central nervous system, which are characterized by partial or total loss of speech functions in children with previously formed speech. In pediatrics, such conditions are rare – these pathologies are more common in adults. The overall incidence among children is less than 1%. Baby aphasia is more common in boys. In childhood, aphasia appears less diverse than in adults, since children’s speech is not so developed.

The younger the child, the less diverse the clinical symptoms of childhood aphasia. Also, for patients of childhood, rapid regression of the symptoms that have arisen is characteristic – after a few months, speech functions can fully recover.

Pediatric aphasia is a heterogeneous state. It develops as a result of the defeat of the speech systems of the central nervous system during the period of the formed speech. In most cases, such conditions are diagnosed on the background of craniocerebral injuries and vascular pathology supplying the brain – the internal carotid or middle cerebral artery. Among the traumatic brain injury the leading role is played by open lesions, accompanied by the loss of the medulla. Closed brain injuries provoke childhood aphasia much less.

Also in the role of etiological factors are tumors, aneurysms, hematomas , brain abscesses , encephalitis . With Landau-Kleffner syndrome , speech loss occurs in conjunction with seizures. The exact etiology of this form of pediatric aphasia has not been established. According to many authors, it can be caused by a genetic or acquired structural propensity for epileptiform activity. The development of acquired epileptic aphasia can presumably provoke previously transferred encephalitis.

According to the International Classification of Diseases (ICD-10), children’s aphasias can be divided into two groups:

1. Children’s aphasia resulting from organic or structural changes in the cerebral cortex . These include speech disorders due to tumors, injuries, vascular pathology, etc. Depending on the location of the lesion and the pathogenetic mechanisms, this group is divided into subgroups, which will be discussed later.

2. Landau-Kleffner syndrome or acquired epileptic pediatric aphasia . In this case, speech disorders occur without organic brain pathologies, the basis of their development is epileptiform activity.

We should also highlight the combination of these syndromes. This condition develops in those situations when, against the background of a neoplasm, hematoma, or other structural changes in the brain, convulsive seizures appear, significantly weighting the clinical picture and stimulating the progression of pediatric aphasia.

The characteristic age for children’s aphasia is 3-7 years. However, in many cases, the time of onset of the disease depends on the moment at which the etiological factor acted – a hematoma occurred or an injury occurred. Depending on speech and non-speech symptoms, as well as localization of lesions in pediatrics and speech therapy , the following forms of structural childhood aphasia are distinguished: acoustic-gnostic or sensory, acoustic-mnestic, afferent and efferent motor, dynamic. The semantic form present in adults is not observed in childhood, since in this period a system of symbolically-signposing signals has not yet been formed.

Acoustic-gnostic or sensory form. The affected area is the posterior 1/3 of the upper temporal gyrus of the left half of the brain. This form of pediatric aphasia occurs due to impaired acoustic analysis and processing of speech sounds, which is characterized by a lesion of phonemic hearing. Clinically manifested violation of all forms of speech and writing, reading and oral counting, rhythmic reproduction. Also, these children have excessive anxiety and excitability, emotional instability.

Acoustic-mnestic aphasia . The localization of the lesion is in the middle and rear portions of the temporal region. The essence of this children’s aphasia is an increase in the deceleration of the auditory traces, resulting in impaired auditory and speech memory. There is also a defect of visual and subject-images. Such children do not understand the subtext, allegories, can not name objects. There is a moderate impairment of oral speech and its perception. There may be increased activity and emotional instability, anxiety.

Afferent motor aphasia . The lesion is the lower parietal regions of the dominant hemisphere. Pathogenetically based on violations of kinesthetic perception. The main feature – anomalies of small articulation of the lips and tongue. Such children are either incapable of expressive speech or have a large number of literal paraphasias. Involuntary and automated (songs, poems) speech, writing and reading saved.

Efferent motor form of childhood aphasia. This form affects the posterior frontal areas. Inertness of the formed stereotypes suffers, which is manifested by perseverations. The ability to speak verbally is minimal or completely absent. Separate sounds, automated speech can be saved. There is a violation of reading, writing, apraxia .

Dynamic aphasia . Extremely rare form in pediatrics, can be observed in children of older age groups. Localization of the pathological focus – posterior frontal regions. Pathogenetically, this type of disease is caused by defects in the inner speech, a violation of the successive organization of the utterance. Manifested by a disorder of productive speech, the inability of active communication – normal sentences are replaced by stereotypes or patterns, verbs are completely absent. Patients with this form of pediatric aphasia almost never ask for anything and do not enter into dialogues, but willingly answer the questions posed. Reading and writing can be saved.

Landau-Kleffner syndrome . Localization of paroxysmal activity may be different, the temporal areas are most often affected. The loss of speech can occur both sharply (most often), and gradually, over several months. The ability to perceive speech is also lost, and violations of behavior and the emotional sphere are possible – hyper-excitability, emotional lability . A characteristic feature of this form of pediatric aphasia is convulsive seizures, which, however, are not observed in all patients.

Diagnosis of children’s aphasia includes the collection of anamnestic data, an objective examination and communication with the child, laboratory and instrumental methods of research. When clarifying the history of the parents, etiological factors are established (trauma, concomitant diseases), as well as the dynamics of symptoms from onset until the time of the examination. An objective examination of the child draws attention to possible neurological disorders that may indicate the nature of the brain damage.

When communicating with a child, a pediatrician or child psychiatrist assesses the patient’s ability to speak, write, read and count, other speech and non-speech functions, which makes it possible to determine the form of children’s aphasia.

Laboratory analyzes, as a rule, are uninformative. In some cases, they may indicate a possible etiology (leukocytosis with a shift of the formula to the left with an abscess, etc.). Among the instrumental methods used EEG , radiography of the skull , CT and MRI. EEG is used to assess the activity of a particular area of ​​the cerebral cortex, and in Landau-Kleffner syndrome, it is used to detect epileptiform seizures.

Radiography and CT of the skull are indicated for head injuries, since they allow determining the condition of the bones of the skull and diagnosing their fractures. MRI of the brain- The most informative method for assessing the structure of the central nervous system. It almost always provides an opportunity to establish the etiological factor of pediatric aphasia and the prevalence of the pathological process and to determine further therapeutic tactics.

Treatment of pediatric aphasia involves special restorative education under the supervision of a speech therapist . Its essence lies in the activation of compensatory mechanisms of the brain using direct and indirect methods. Direct methods are shown in the early stages, based on the use of activation of the reserve abilities of cells. Indirect or workaround methods compensate for lost functions due to functional rearrangements. Depending on the situation and the form of pediatric aphasia, texts, cards, pictures, computer programs, and various subjects are used as teaching materials, but exercises with a speech therapist play a leading role.

The effectiveness of rehabilitation training depends on a number of factors: the form and duration of the disease, the severity of the CNS damage, the etiological factor, the age of the child and the moment of initiation of therapy. The children’s brain is very plastic, therefore, in milder forms, rapid regression of symptoms is often observed.

With mild structural aphasia of children, the ability to communicate returns within 3-5 weeks, with an average – after 1-6 months. In Landau-Kleffner syndrome, in addition to training, appropriate medical anticonvulsant treatment can be used. However, even against the background of the positive dynamics of the age norm, it is quite rare to achieve.

Prognosis and prevention of pediatric aphasia

The prognosis for pediatric aphasia is often favorable. With early diagnosis and timely initiated rehabilitation training during the first few weeks or months, it is possible to achieve rapid regression of the pathology. In severe forms of CNS or Landau-Kleffner syndrome, the prognosis is dubious. Prognostically unfavorable sign is the lack of positive dynamics during the first few weeks. Specific prevention of children’s aphasia does not exist.

Nonspecific measures include the exclusion of all possible etiological factors: early diagnosis and treatment of underlying diseases of the central nervous system and blood vessels that can cause ischemia of the cerebral cortex, minimizing the risk of head injuries.

Children’s aphasia is a heterogeneous group of pathologies of the central nervous system, which are manifested by partial or complete loss of previously present speech. In addition, they can be accompanied by violations of reading, writing, perception, counting, emotional and behavioral reactions. The basis for the diagnosis of pediatric aphasia is the direct assessment of the speech and nonverbal functions of the central nervous system, as well as the determination of structural and functional disorders of the cerebral cortex using CT, MRI and EEG. Treatment includes the passage of a course of special rehabilitation training and the elimination of the etiological factor (if possible). In Landau-Kleffner syndrome, anticonvulsant therapy is also performed. 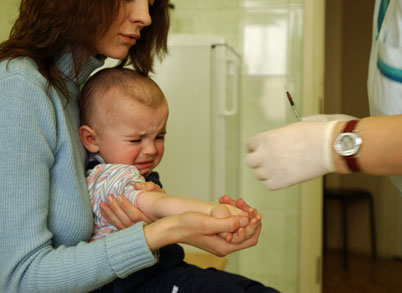 Do you have the right to force you to immunize?