Arbidol and Cycloferon are used during the period of influenza epidemics, as well as other respiratory diseases, the cause of which is the virus. These funds can also be prescribed for prophylaxis according to schemes involving the use of drugs for several weeks.

Arbidol is positioned as a drug that accelerates the healing process for bronchitis and pneumonia, which complicated the course of the flu. In addition to infections of the respiratory system, a medicine is proposed to combat intestinal rotavirus infection, which often affects children. For small patients, it is more convenient to use a suspension.

Cycloferon appears to be a drug with a wider range that works against herpes, cytomegalovirus and chlamydial infections, hematogenous hepatitis, infections of the nervous system, and human immunodeficiency virus. The instruction suggests the use of cycloferon for autoimmune diseases such as scleroderma, lupus, and also joint diseases. In severe diseases, the drug is prescribed in injections.

Cycloferon liniment (ointment) is applied to the oral mucosa in case of inflammation – periodontitis, on the skin – for herpetic eruptions, is inserted into the vagina in violation of the ratio of beneficial and harmful microorganisms.

It should be remembered that these drugs are rarely used by doctors around the world. Arbidol and Cycloferon were widely used precisely in the post-Soviet space. Conducted multicenter studies did not reveal any advantages in prescribing these drugs for influenza and other viruses. Excessive enthusiasm for stimulators of the synthesis of interferon can be even dangerous. The immune system is a very cunning, finely tuned mechanism, gross interference with it is unacceptable.

The onset of the cold season brings with it not only the joy of active sports in the snowy open spaces, but also the danger of catching a viral infection. The likelihood of catching a cold in transport, at work, in a shopping center is increasing. At the initial signs of a viral disease, doctors prescribe medications to increase the body’s chances of an early and complete cure. Among commonly prescribed drugs, consider Arbidol and Cycloferon.

Arbidol – the sales leader in the winter

The manufacturer claims that Arbidol acts directly on viral particles. The drug is docked with a protein on the viral membrane, preventing the pathogenic microorganism from entering the cells. The antiviral effect is also enhanced by increasing the production of interferons – protective components of the blood. The instruction says that the drug is used both for therapy and for the prevention of viral respiratory diseases such as influenza, adenovirus, etc. In addition, it can be prescribed for intestinal disorders provoked by rotavirus. The indications for Arbidol list such complications of viral infections as bronchitis, pneumonia, and acute respiratory syndrome.

Available in the form of capsules (including doubled dosage – Arbidol Maximum), tablets and dry powder in bottles for the manufacture of a suspension for children.

The creators of Cycloferon argue that the drug provokes the body to increased production of several types of interferons. Interferon is one of the fighters of the immune system that affects cells infected with the virus, blocks the spread of infection, directly modifies the structure of pathogenic particles, destroys them. 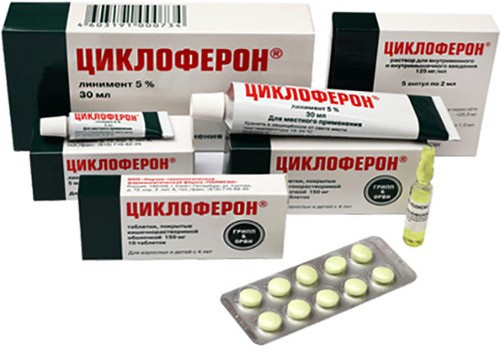 According to the authors, Cycloferon should help produce more interferon for protection. The range of indications for its use is quite wide. These include colds, viral hepatitis, herpes, chlamydia and even HIV.

They produce tablets, ampoules with a solution for injection, ointment for external use. Tablets are shown to children from 4 years.

The use of cycloferon is limited in pregnant, lactating women. Special control over the treatment process is required in patients with any thyroid dysfunction.

What is the difference between drugs
Post Views: 153
Spread the love