Some, as I wrote about here two years ago, even seem to craft elaborate flower-like stabbing arrays that they release into the environment for no obvious reason upon their suicide, whereupon the stabbing blossom is co-opted by tube worm larvae as a signal that it’s time to settle down and glue their tube to whatever hard surface happens to be nearby. Whew!

And then there’s Amoebophilus asiaticus. Amoebophilus appears to do it as a tribute to Harry Houdini: it uses its stabby bits to escape digestive jail cells inside amoebas that eat it, according to new research published in Science this summer. And a separate paper published this month in Nature Microbiology has revealed exactly how the machine fires in all these bacteria.

All of these bacterial stabbing-systems bear an uncanny resemblance to the DNA-injecting tails of bacteriophage viruses. Such viruses are famous for their lunar-lander appearance and use their tails to inject their DNA into bacteria. The host bacterium becomes a zombie that churns out more viruses before, typically, it explodes, releasing many new viruses to the environment.

The bacterial machines that resemble these viruses are called “contractile injection systems”, and their structure is nearly indistinguishable from the business end of a bacteriophage, minus the helical head that stores the virus’s DNA. The resulting machine is a spear gun capable of injecting poisons or other payloads into its target – sometimes remotely when the machine is launched into the environment. No one currently knows whether the virus or the bacteria had this equipment first, and who may have stolen what from whom, or even whether they both arrived at the same invention independently.

In the paper released last week in Nature Microbiology, scientists from Switzerland and Germany announced they had figured out the “loaded” configuration of both the spear and its gun, and how exactly they interact.

The gun is composed of an inner hollow tube and an outer sheath. When the gun fires, the outer sheath contracts to eject the inner tube, which is capped by a spike that acts as spearhead. They also discovered that the launcher rotates its payload, causing the spear to spin like a drill or a rifle bullet. Watch for the spin in this video, along with the emergence of helical ridges on the contracting sheath:

The sheath is built of more than 200 interlocking protein rings. During firing, each ring rotates, enlarges, and crowds closer to the anchor plate and its closest ring neighbor, ultimately shrinking the sheath to half its former length while slightly increasing in diameter. The collective motion both propels and sets the spear spinning, while the enlargement of the rings releases it from the barrel’s grip. In less than two milliseconds, the spear has drilled into its target.

Bacteria that possess these weapons do not appear to use them to inject DNA. Instead, they often deliver a payload of chemical weapons put to a variety of uses. Scientists from ETH Zurich, writing in the journal Science in August, announced they have discovered a new use of the contractile injection system as lock pick in Amoebophilus.

Some bacteria that employ contractile injection systems release their weapons into the environment, where they float around before binding to their target and firing. Those that plague insect larvae, metamorphose tube worms, and attack other bacteria are of this sort. Others are retained inside the bacterium and anchored to its inner membrane, a part of the bacterial hull. Amoebophilus’s guns are of this type, the scientists said, based on microscopic photographs. These anchored artillery-pieces are referred to as “Type 6 secretion systems”.

The Swiss scientists had noticed that although the Amoebophilus genome does not contain genes for any known bacterial secretion system (Type 6 or otherwise), it does contain a cluster of genes that resembles the free-floating contractile injection systems used by some bacteria to attack insects. They wondered whether it might help the bacterium interact with its host, the amoeba.

Amoebophilus bacteria, true to their name (“Amoeba lover”), can only reproduce inside the body of an amoeba. They appear to be symbionts – quite possibly parasites, although that is still unclear – of the amoebas they live in, acquiring both food and shelter from their host.

When they examined Amoebophilus bacteria purified from their hosts under the microscope, they saw that 50% contained what appeared to be a contractile injection system anchored to the inner membrane. The guns were in hexagonal arrays of two to 34 – on average eight. Most of the time, the cell had two such bundles. Usually, some of the guns in each array had been fired and some remained loaded, a difference that was easy to see by the length, width, and texture of the sheath. The contracted sheath was much shorter, slightly fatter, covered by helical ridges, and empty – just as you’d expect from a contractile injection system.

They missing spears were found in the liquid outside the bacteria, but no other parts of the apparatus were with them.

Loaded injection guns possessed the same structures in the same sizes as a phage tail: sheath, six-footed anchor, base plate, and spear.

The loaded spear inside its gun (left), and right, the contractile injection system of a T4 bacteriophage tail overlaid onto it in color (with constituent proteins labeled at far right) for comparison. The spearhead is clearly visible in orange. Credit: Böck et al. 2017

The scientists concluded that Amoebophilus possesses a Type 6 secretion system.

To see what it was doing with its big guns, they sliced through infected amoebae and observed the thin sections with a microscope. Within 15 minutes of infection, the bacteria were already inside digestive bags called phagosomes (“eating bodies”). But within 2 hours of infection, they had escaped.

Around that time, they saw that more of the Amoebophilus guns had been fired and the genes that make the guns were being used a lot by the bacteria.

The scientists also incubated Amoebophilus with red blood cells, which are like big defenseless balloons waiting to be popped. Armed bacteria were not only able to burst red blood cells, they had also fired 30% more of their guns compared to control bacteria not exposed to red blood cells.

Finally, photographs of Amoebophilus trapped inside phagosomes showed that anywhere a bacterium physically touched the phagosome membrane, the injection guns were adjacent to the point of contact, and at least one of them had been fired. The smoking gun, as it were.

Contact sites (black arrowhead and inset) between the phagosome and Amoebophilus. The contractile injection system was always adjacent to such points. Credit: Böck et al. 2017

It’s not yet clear, however, whether the phagosome is destroyed by the escape, nor whether it is ruptured by the physical act of puncture or by chemicals delivered by the spears.

Stabbing the phagosome, however, seems to allow Amoebophilus to escape its prison, avoid being eaten, and then to help itself to its host’s pantry while making lots of little bacteria.

Whatever the case, the authors say, its existence implies there are a heck of a lot more bacteria out there than we thought that stab things for a living. In DNA searches across Domain Bacteria, they found genes similar to the ones Amoebophilus uses to build its guns in six different bacterial phyla, the high-level taxonomic ranking just below kingdom. Far from being helpless little bags, bacteria appear more than capable of physically manipulating their world by turning themselves into trigger-loaded hypodermic needles that can poison rivals, predators, and prey – or pick locks inside hosts that give bacteria the run of the place.

A growing number of US hospitals can’t treat sick children 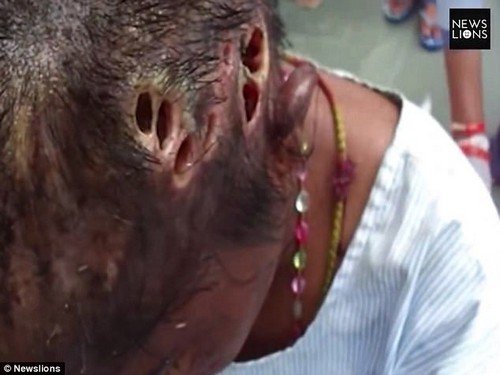 Most HIV patients have virus for 3 years before diagnosis