Americans’ mental health has been in something of a tailspin in recent years, with more and more people reporting that they are anxious, depressed and even suicidal.

Major depression is on the rise for the third year in a row, affecting nine million Americans insured by one of the nation’s largest providers, new data reveals. Rates are climbing across the board and are rising at the fastest clip among teenagers.

Depression seems to go hand-in-hand with other conditions as the vast majority of those with the mood disorder also suffer from another ailment.

Rates of depression varied significantly from state to state in the US, hitting the Midwest and Northeast particularly hard, according to the latest data from health insurer Blue Cross Blue Shield.

Rates of depression vary widely across, but the condition is on the rise in every state but Hawaii, affecting nine million people insured through Blue Cross Blue Shield

More than nine million Americans were diagnosed with depression in 2016, accounting for more than four percent of the population – and far more likely suffered from the condition without ever being diagnosed.

Rates varied from just two percent of the population in Hawaii up to six percent in states like Rhode Island, Maine, Minnesota and Utah. In total, 49 out of 50 states saw increases in depression, with belts of higher rates in the Midwest, Northwest and Northeast.

Depression has a greater negative impact on the overall health of people in the US than any other condition with the exception of high blood pressure.

By Blue Cross Blue Shields’s measures, those who have been diagnosed with depression are 27 percent less healthy than those without the condition.

‘This difference in overall health, on average, translates to a reduction in future healthy life expectancy of 9.5 years for women and 9.7 years for men,’ the report said.

Depression has been linked to higher rates of Alzheimer’s and stroke – particularly in women – as well as heart disease and Parkinson’s. Some scientists have even suggested that depression may directly cause greater systematic inflammation which, in turn, can lead to blood clotting and vessel failures.

According to the new Blue Cross Blue Shield (BCBS) data, 85 percent of people diagnosed with depression also had at least one other condition and 30 percent had four or more ailments.

Between 2013 (orange) and 2016 (blue), depression became more common in every age group, but the steepest rise by far was among teenagers

Notably, however, people least likely to have other diseases – those between ages 12 and 17 – saw the sharpest increases in rates of depression.

‘These quickly rising rates of diagnosed major depression in younger age groups can have broader implications on future healthcare needs as they grow into later adulthood,’ the BCBS report’s authors wrote.

Their findings come just months after the American Academy of Pediatrics made a major push to address alarming trends in the mental health of adolescents by publishing new guidelines urging that all children and teenagers should be screened for depression.

BCBS’s report echoed the need for early interventions: ‘Effective diagnosis and management of major depression in these early years is crucial to positively impact future health and wellness,’ the authors wrote.

Low concentrations of childhood psychologists and psychiatrists are an often-cited barrier to screening and treatment.

Shortages of these health care providers are widespread, but are particularly problematic in rural and poorer areas of the country, including parts of the Midwest, South and Northwest.

The vast majority of people with depression – 85 percent – also had at least one other health condition, underscoring growing concerns about the overlap of mental and physical health

As documented by the BCBS data, the geography of depression’s upward march among people of all ages is similar.

‘There are higher rates of major depression in New England, the Pacific Northwest and various pockets throughout the South and Midwest,’ the report reads.

More people were depressed in Rhode Island than any other state, with six percent of the the population being diagnosed with the mood disorder.

Only Hawaii, where just two percent of the population was diagnosed with depression in 2016, was spared from the increasing rates of the condition in all 49 other states.

The causes of these disparities are unclear and undoubtedly complex, but the report offered one explanation: ‘Differences in the effort to screen for major depression can produce varying diagnoses rates for this condition across states.’

However, where healthcare was available, those with depression were far more likely to utilize healthcare and accrue higher costs.

Healthcare costs for those with depression were twice as high as they were for others.

The average American without depression costed the insurer $4,283 in 2016, while BCBS paid out $10,673 per person on average for those with depression that year.

Depressed patients themselves spent an average of nearly $1,000 on healthcare expenses in 2016.

To avoid additional health concerns and cut the significant costs to Americans and the healthcare system, ‘further education and research are needed to identify methods for physicians to effectively treat major depression and for patients to begin a path to recovery and better overall health,’ the report said. 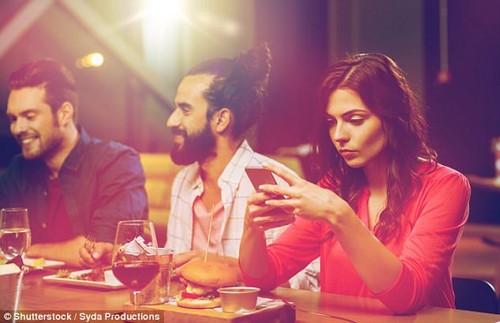 People compulsively unlock their smartphone for no reason