Recently I met two people with the same heart condition caused by getting an infection via their teeth. One needed open heart surgery and the other antibiotics – both nearly died. Is this common and, if so, how does it occur?

The condition you’ve described is infective endocarditis and while it’s not particularly common – it affects about ten in every 100,000 people a year – it’s nonetheless worth discussing because it can potentially affect a wide range of people. It occurs when bacteria travelling in the bloodstream attach to the endocardium, the lining of the heart. The infection usually involves one or more of the heart valves, too.

Realtively common: Infective endocarditis occurs when bacteria travelling in the bloodstream attach to the endocardium, the lining of the heart

Most people who develop infective endocarditis have a pre-existing abnormality in the heart that gives the bacteria the opportunity to lodge there. These abnormalities include conditions such as rheumatic heart disease, in which the structure of one or more of the valves has been damaged, or mitral valve leaflet prolapse, where one flap of the mitral valve – the main valve between the two left-hand chambers of the heart – prolapse over the other.

When a valve is abnormal this alters the blood flow over its surface, which in turn affects the immune response in the area. The endothelium, the lining of the blood vessels and entire cardiovascular system, is avascular, meaning that it does not have its own inner blood supply – a bit like the lens in the eye. (Technically, the endocardium is the name given to the endothelium inside the heart.)

As a result, the endothelium is prone to build-ups of ‘vegetations’, which effectively become a seedbed for passing bacteria. In fact, it’s normal to have bacteria in the bloodstream – even cleaning your teeth launches organisms into the blood. But they are soon cleared by normal immune mechanisms.

However, if you have an abnormal heart valve, this gives bacteria the opportunity to take root and cause an infection. Brush up on your brushing skills: Do all you can to maintain good oral hygiene, experts say

The flaps in the heart valves seem to be particularly prone to this. Various factors increase the risk of endocarditis in these patients, such as having catheters in your veins (as when undergoing chemotherapy), a suppressed immune system, and, most relevant to your letter, dental procedures or dental infections.

But endocarditis is not confined to patients with cardiac abnormalities. Other risk factors are age (being over 60), being male (we don’t know why) and poor oral hygiene. An endocarditis infection can appear as an acute illness with fever, chills and loss of appetite, or more slowly, causing fatigue, headache, sweats, aches and pains, and weight loss.

His replies cannot apply to individual cases and should be taken in a general context. Always consult your own GP with any health worries.

Once the infection is established on the heart valves, bacteria may then be pumped around the body in the form of infective particles. For example, one of the things we look for are ‘splinter haemorrhages’ – tiny black splinter-like marks under the fingernails, each of which represents an infective particle from the heart getting trapped in the capillaries of the nailbed. If these particles reach the brain, abscesses may form, which can cause the patient to suddenly collapse; this is deadly if untreated.

The treatment is a prolonged course of antibiotics at high doses, often given intravenously. When there is significant valve damage, surgery may be necessary. As we know that poor dental hygiene has also been linked to heart disease – the suspicion being that the gum disease leads to inflammation in the endothelium – the message is clear: do all you can to maintain good oral hygiene.

I have been diagnosed with asthma and my voice now sounds rough. Is there anything I can do to make it clearer?

I suspect your hoarseness is due to chronic laryngitis, the term used when the larynx – the voice box which houses the vocal cords – has been inflamed or damaged for more than three weeks.

Chronic laryngitis is usually associated with irritants, in particular smoking, acid reflux, infections, or persistent misuse of the voice – for instance, as a result of having to raise your voice.

The condition can also be due to benign lesions on the vocal cords, such as polyps or nodules, laryngeal cancer, and neurological dysfunction, when the nerve supply to one of the two vocal cords is interrupted. But these are almost certainly not related to your current problem. I say this as asthma patients commonly become hoarse because of their steroid inhaler. The steroid partially suppresses the immune system in the throat and larynx, allowing yeasts, particularly candida albicans, which can lead to thrush, to flourish.

This might cause a slight sore throat, possibly redness and white curdy plaques. In the larynx, the yeast may cause the hoarseness that troubles you. The usual instruction is to drink water after using your inhaler, to wash traces of the medication away. But while this may protect the throat, it won’t help the larynx as the swallowed water does not flow down the airway where the larynx is.

Nor will an oral antifungal (such as nystatin oral suspension or amphotericin lozenges) help. The only treatment that can work is a single 150mg swallowed capsule of the antifungal fluconazole as it is absorbed from the stomach and distributed throughout your system.

That single dose should restore your voice in 72 hours if my diagnosis is correct. You can request this from your GP or buy one over the counter from a pharmacy. If your voice does not rapidly improve, or if you have not been using a steroid inhaler, then – as anyone should who has had hoarseness lasting six weeks or more – you should request a referral from your GP to an ear nose and throat specialist.

I HAVE received a number of letters asking what I thought about using talcum powder. That’s because that old-fashioned product may not be as safe as we’ve assumed.

In August, Johnson & Johnson, manufacturer of a famed and traditional baby powder, was ordered to pay $417 million (£316 million) to a woman who has claimed that decades of using the product in an intimate area of her body has caused her ovarian cancer. The verdict was then overturned.

This followed a case in 2016 where the family of a woman who had died of ovarian cancer was awarded $72 million (£54 million) – although after an appeal by the company, this award was recently thrown out.

Although there is a plausible association, there is no hard evidence that baby powder is carcinogenic. Nevertheless there was sufficient suspicion for the lower court to make the decision to award damages. More than 1,000 others are taking similar legal action against Johnson & Johnson.

Talc is made from a soft mineral called hydrous magnesium silicate that is found throughout the world. It is not the only type of silicate – and for me, there does seem to be some suspicion lurking over the potential for silicates, under some circumstances, to cause harm.

As a student I was asked to explore why there was a particularly high rate of stomach cancer in Japan. I learned that rice grains in the country were traditionally tossed in a small amount of mica powder – a silicate not dissimilar to the main constituent of talcum powder – to stop the rice grains clumping together when cooked.

Biopsies taken from people’s stomach ulcers were found to be cancerous and there was also inflammation in the tissue surrounding the mica granules that had been ingested with rice.

It has also been revealed that workers who mined the silicates had a high incidence of nasopharyngeal cancer, almost certainly due to inhaling the dust, which caused damaging biological reactions in the body, which led to cancer.

The problem is that the evidence on talcum powder is mixed, but with the International Agency For Research On Cancer classifying genital talc as a possible carcinogen, I know what I think. 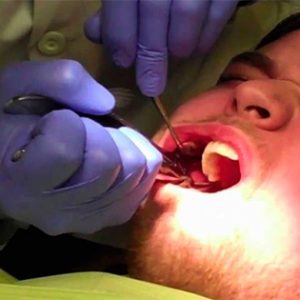 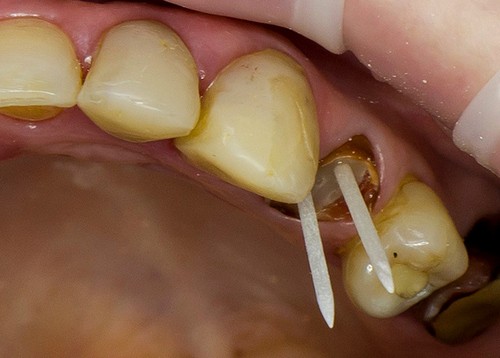 The difference between a pin and an implant

One thought on “Can a tooth infection spread to the heart?”