Gingival recession – pathology of the periodontium in which the gingiva is displaced and, as if, slides off the surface of the tooth, exposing the root. Recession may manifest itself in only one tooth or affect the whole series. Refers to non-inflammatory periodontal disease.

One of the common complaints of elderly patients in the dental chair – the exposure of the tooth neck. And bothering people is not the terrible consequences of this disease, and very little chance to cure him, and the visual defect that it causes. The stronger the pathology, the less the patient’s desire to smile, and openly to enjoy life. Gingival recession, namely the so-called denudation of the neck of the tooth dentists much an effort on self-esteem, cause communication difficulties and many times reduces the ability of social adaptation.

Dentists say if the patient complains of bleeding gums, in 10 cases out of 100 the doctor will identify the characteristics of the exposed neck of the tooth. And with age the probability to meet a serious disease increases. So, in children and adolescents gingival recession occurs only in 8% of patients. At the time, like people after 50 years – 90-95%.

Causes the exposed neck of the tooth

The most common cause of disease – injury to the gums. It may be too meticulous care for the oral cavity with the help of hard brushes, the frequent use of toothpicks and interdental stimulators. To reduce gums can even orthodontic treatment.

In this case, be decisive 2 factors:

Gingival recession in a young age may develop due to shock, for example, during a fight, a fall or accident. As a rule, in this case laid bare root only 1-2 teeth and gums is lifted no more than 3 mm.

To provoke denudation of the tooth root may be the piercing of lips or tongue. A foreign body is highly traumatic for the mouth, even if the patient himself does not notice this at first.

Another common cause of receding gums at a young age – lack of care for the oral cavity. The consequence would be an active development of pathogenic bacteria, which in turn will lead to gingivitis or portantino. Both these pathologies cause not only severe pain, bleeding gums, and exposure of the gums near the tooth.

In old age you can talk about the physiological recession, which is a manifestation of aging of the organism. In patients older than 50 years pathological process immediately captures vast area, develops rapidly and leads to mobility and even tooth loss.

The omission of the gums can be a symptom of hormonal imbalance in the body. And with the full study, doctors quite possibly diagnose problems with the thyroid gland or the beginning of the development of diabetes. Cause recession of the gums may be more pleasant, for example, this abnormality may indicate the onset of pregnancy.

There are anatomical preconditions for the development of pathology. For example, short frenulum, which causes strong tension of the gums, by nature the thin gingival tissue, short roots of teeth, wedge-shaped defect. Even an overbite can eventually lead to displacement of the gums, if the teeth are positioned in such a way that damage the periodontal tissues.

A healthy gingival margin of the tooth have the appearance of a smooth circle without mounds evenly pink hue. When periodontal tissues captures the pathological process, the gums can pripuhnut, become edematous in appearance, change its color – and it may become bright red, and, conversely, unnaturally pale.

As soon as the gum recedes, the more clearly is seen the root of the tooth. Its yellow tint is very different from the color of the enamel, and if at least sometimes, to smile at my reflection in the mirror, not to notice the beginning of the development of pathology is impossible.

Insidious disease that gum recession is rarely accompanied by pain. And if nothing hurts, patients accept the process as inevitable age-related change, and not in a hurry to the dentist. The doctors have to deal with running instances in which to turn back the clock is unrealistic.

To suspect recession of the gums and can in other ways:

The exposure of root is dangerous because starting from a single tooth, the process soon extends to the neighboring region. And the neglect process, the harder it is to cope with it doctor. So at the first signs of a recession, you should consult a dentist.

If the pathological process has not yet captured a vast area, treatment may be limited to:

But most often, when patients come to the dental clinic, the disease has passed into the stage when we can only help surgical treatments. Their goal: to close the exposed neck of the tooth and restore the natural contour of the gums.

The most common treatment option that dentists and their patients appreciate the short recovery period. He is a transplant of tissue flap the gums or palate on the affected area. The disadvantages of the method are that a feeling of discomfort in the area was taken from tissue for transplantation and the possible mismatch of color of the gums and the borrowed flap.

A method of tissue regeneration

In this case, the affected area is embedded the membrane, which stimulates the growth of its own soft tissues of the patient. When the natural contour of the gums will be restored, is carried out one more operation – on removal of the membrane. This method of reconstruction of the gums is very effective, but scares the patients need repeated surgical intervention.

Fortunately, technology does not stand still, and today, more and more dental clinics can offer implantation of a resorbable (resorbable) membrane. It does not require re-operation, and makes the method of tissue regeneration is an ideal treatment for receding gums.

Treatment with medicines in the home

At the first signs of denudation of the tooth neck you can do without surgery. But in any case, to self-medicate is not: all medicines must be prescribed by a dentist.

So, the patient is absolutely required regular use of antiseptic solutions:

If there is swelling of the gums and redness, you will need a special ointment and gel “Metrogyl Denta”, “Kamistad”, “Holisal”. Special attention should be paid to the selection of toothpaste. It should help relieve inflammation. Well established Biomed, R. O. C. S. “Lacalut”.

A terrible symptom is the appearance of pus. In this case, to postpone the visit to the doctor not for a single day! To stop the inflammatory process in this case is possible only with antibiotics.

Soothe sore gums and to relieve pain help traditional methods. They can be used both independently and in conjunction with the main treatment. The only caveat: the recommendation of the dentist is necessary in this case.

Massage with a soft brush

Will help stop the denudation of the neck of the tooth of the ordinary beet. Grated on a small grater it is to be applied on the gums and leave for half an hour. The procedure should be performed daily, and after 2 weeks, the effect will be noticeable. And to prevent recession of the gums is necessary to make compresses of sea buckthorn, spruce, fir and olive oils.

Well animal pain gargle saline solution with addition of ammonia and camphor alcohol. The correct proportion of 1 litre of boiling water, tablespoon of salt and 100 ml of camphor and ammonia. Instead of store-bought mouthwash, you can use the decoction of chamomile, calendula and sage. They have a strong calming and antiseptic effect.

To provoke denudation of the neck of can tooth a variety of reasons. And without them identify any national treatment will be ineffective. Therefore, the only correct step if you suspect gum recession – a visit to the dentist!

Diet exposure necks of the teeth

There is a perception that at the first sign of periodontal disease, and even more so, the exposure of the necks of the teeth, an urgent need to abandon any solid food. Indeed, to injure the inflamed gums to anything. However, the world Health Organization does not even recognize periodontal disease of the disease, believing it to be only the result of insufficient masticatory load.

Therefore, in those cases where the gingival recession are mild, immediately after the inflammation is to think about your diet to enrich it with whole nuts, fresh fruit and vegetables. It’s important to arrange your gums training. And in the autumn-winter period not to neglect vitamin complexes, which should include vitamins A, D and B9.

How to prevent the exposure of tooth necks

Best way to prevent gum recession – a regular preventive visits to the dentist. Because the earlier a problem is identified, the more chances to cope with it with minimal consequences and for the wallet and for your health.

It is very important to treat their health with care: if you need orthodontic treatment of malocclusion, it is necessary to give preference is the most gentle techniques, even in this case, the correction of the position of the teeth will take more time. If the tooth enamel is too sensitive, do not delay your visit to the dentist. Not to mention the treatment of caries, which must always be timely. Don’t skimp on toothbrushes, and ideally, get electrical. She adjusts the pressure on the teeth, and is guaranteed not to damage the gums. 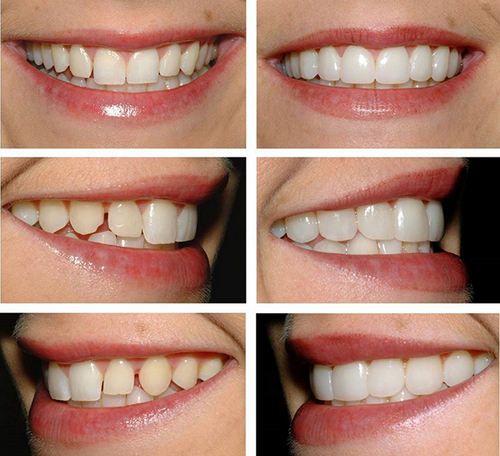 The alignment of the teeth veneers 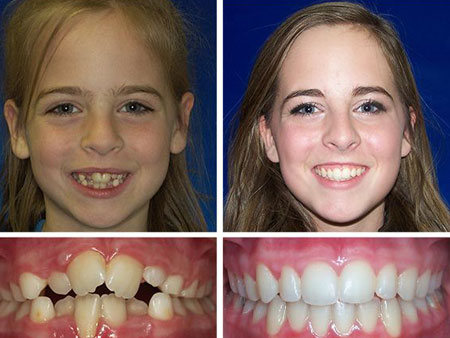 Malocclusion in a child