Giardia – one-celled organisms-parasites, causing the disease giardiasis. In the course of their life they can exist in two forms – trophozoite and cysts. First grow and develop in the small intestine, disrupting digestion and killing the mucosa.

Under adverse conditions, trophozoite moving into a different stage of development cysts. In such moments they hide flagella, stop moving and covered by a protective sheath.

The disease is transmitted by the fecal-oral route. In most cases, diagnose Giardia in children in close groups of schools and kindergartens just one infected child can spread the disease. Very often the disease is asymptomatic, so the only way to set a correct diagnosis is the use of laboratory methods. This specialist conducts sampling of biological material in children, identifying vegetative forms and cysts of Giardia.

Although these individuals cannot be seen without special equipment – their size is not more than 18 micron – sometimes they can cause irreparable harm to the human body.

The simplest form of research is taking blood from the vein. This method is based on quantifying specific antibodies to fight off foreign microorganisms. Antibodies (immunoglobulins, Ig) – special proteins in the human body, neutralizing various viruses, bacteria.

The result can be as follows:

However, a blood test for Giardia is not always informative, for the reasons:

More accurate information will show the analysis of a feces. When passing the biomaterial, and the examination took less than 20 minutes, the specialist will see mobile form of Giardia. If after intake 2 hours or more – only cysts of parasites.

A tissue biopsy of the small intestine is the most informative method, but expensive. This procedure allows to accurately determine not only the presence of worms, but the level of changes in the structure of the tissues of the body. The analysis is carried out only with difficulty in diagnosis and the suspicion of a tumor of the intestine.

ENTEROtest is that the patient swallows a gelatin capsule, which is nylon thread. In the stomach the pill dissolves, and the parasites cling to the filament, which in a couple of hours out naturally (with mud) is given for the study.

Preparation and conduct of the study

A blood test for Giardia requires no special training. It is held in the morning on an empty stomach. It is permissible to drink a small amount of pure non-carbonated water. From the last meal should take at least 10 hours.

Some doctors require patients to pass a fresh biomaterial, but not always. This is especially problematic for young children who will not tolerate to get tested for Giardia at a specific time. Here it is sufficient that the storage period of faeces did not exceed 12 hours. During this period, the parasites go on to form cysts, which are very hardy and can stay in this state for a long time.

It is desirable that the material was in liquid form. If the child has constipation or very hard stools, then before bed he is allowed to give a small amount of laxative (half dose). Biomaterial harvested from several plots. This is due to the fact that the cysts are intermittent and they may not be in one of the zones of feces, but they are in abundance to be present in the other. Sampling of feces pay attention to distinguish areas with altered consistency or color, mucus. To take stool is just one of those places.

A single blood or stool is not able to give accurate clinical picture. It is necessary to conduct such studies at least 3 times with an interval of 3-7 days.

The symptoms of infection

The primary symptoms of giardiasis appear about 2 weeks after infection. The child may be disturbed only to the following symptoms, at first glance not related to the parasites:

These problems can last up to 3 weeks, and then suddenly disappear. This means that the disease has become chronic.

If children have appeared the first signs of the disease, do not postpone visit to the doctor. He will give a direction for tests on the presence of Giardia, which with high precision will be able to confirm or refute the presence in the body of the child intruders.

Evidence for the presence of worms in the body 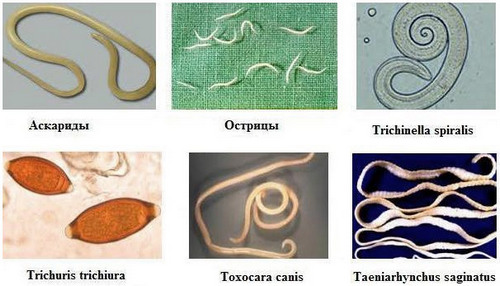