There are slight differences in contraindications for use. Children from 6 years old can use a suspension, and tablets, only starting from 12 years old. The composition of the tablets includes aspartame. It is a sweetener and sugar substitute. Patients with phenylketonuria disease should be treated with caution.

For patients with diabetes, it is better to take Gaviscon in the form of tablets, in the composition of which aspartame is added. Since the suspension contains sodium saccharin in its composition, it is also contraindicated in diabetes. It is convenient to give the suspension to children and the elderly with impaired chewing and swallowing function. Before use, tablets must be chewed very carefully. Both forms of release are dispensed from pharmacies without a doctor’s prescription and are available to everyone. The tablets have a compact package of 4 pieces. Such a small package will always find a place in your pocket or purse and is affordable for everyone.

Gaviscon is tested by time and many patients. It is absolutely safe, lasts up to four hours and has a minimum of contraindications for use.

In medicine, heartburn is called gastrointestinal reflux . The ingestion of gastric juice and hydrochloric acid of the stomach on the mucous membrane of the esophagus as a result of gastroesophagic reflux. This is because the lower esophageal sphincter is expanded not only due to the passage of chewed food from the esophagus to the stomach, but also in other cases. Such rare refluxes are considered the norm in healthy people, but frequent are pathologies, due to the presence of various diseases of the gastrointestinal tract.

Heartburn is accompanied by pain and a burning sensation behind the sternum. With frequent heartburn, you need to find the reason why it occurs and eliminate it. To eliminate heartburn in healthy people, if they eat improperly, the British pharmaceutical company Reckitt Benkizer Helsker Limited invented a safe and fast-acting Gaviscon drug. The company produces two forms of the drug. In the form of tablets and suspensions. Let us consider in more detail the two forms of release of this drug, and we will analyze their effectiveness.

This drug belongs to the group of antacids . It neutralizes the effect of hydrochloric acid. The active ingredients of Gaviscon are:

Inactive substances that form tablets are:

Chewable tablets, do not require drinking water and have a mint flavor. Substances of the drug, upon contact with hydrochloric acid of the stomach, form an alginate gel . In this case, the pH becomes neutral. On the surface of the stomach, sodium alginate forms a protective barrier. For a period of up to four hours, it prevents the reverse flow of the contents of the stomach. Burning in the esophagus disappears already 3-4 minutes after taking the pill. Chewable tablets are available in 4, 6, 8 and 10 pieces per pack.

A suspension is a suspension, which is a mixture of substances, where solids in the form of small particles are in a liquid substance in an unsettled state. It consists of the same active components that are part of the tablets. 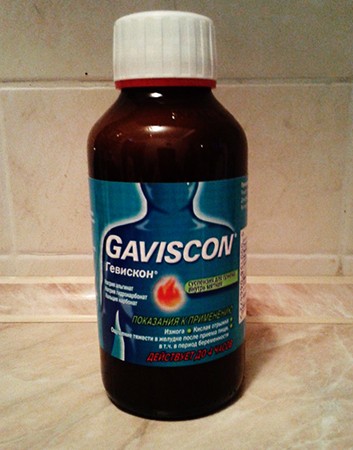 Available in dark glass bottles. The volume of produced bottles is different. The smallest bottle of 100 ml . Still produce 150 ml and 300 ml .

General characteristics of these release forms

Tablets and suspension do not have systemic bioavailability. Their mechanism of action is a physical process . Therefore, the therapeutic effect occurs without absorption of the drug into the general bloodstream. Tablets and suspension can be used for heartburn during pregnancy and lactation, since the drug is not absorbed in the digestive tract and is not able to harm the fetus and the baby. Contraindications to use, in addition to individual sensitivity to the components of the drug, these forms of “Gaviscon” do not have. It is necessary to use the drug with caution in diseases such as:

Rare side effects when taking Gaviscon may be bronchospasm and bloating. Since Gaviscon belongs to the antacid group of drugs, it is impossible to take two hours before its use and after, any other drugs. It interferes with the normal absorption of substances, and other drugs may not show their therapeutic activity.

The composition of the tablets and suspension includes sodium , so people who follow a low-salt diet and have congestive heart failure should take into account the fact that four tablets contain 246 mg of sodium.

Asanas for the health of the thoracic spine

Aloe Vera: What It Does To Your Body And Why Egyptians Prefer It

6 Important Fashion Hacks That Every Woman Should Be Aware Of