Ultrasound – a procedure that allows echolocation to show on the screen the image of a dense internal organs, lymph nodes, blood vessels in real time, to measure the speed and direction of movement of the various tissues and fluids.

The resolution of the resulting video and the maximum depth available for ultrasound depends on the sensor design and the use of sound frequency.

The main advantages are:

1. full non-invasive, no contraindications, no harm to health;

2. the opportunity to observe the reaction of the body for manipulation;

3. obtaining status data of internal tissue structures that are inaccessible by endoscopy;

4. the relative cheapness of equipment and procedures;

5. the ability to pass the examination on their own without a doctor’s prescription.

Ultrasound of the stomach is a relatively new diagnostic method, widely spread along with devices high definition. Due to the hollow structure of the stomach the accuracy of ultrasound is not big enough to do it instead gastroscopy or x-ray. In addition, the inability to take a biopsy very often leads to the need to do gastroscopy immediately after the ultrasound. Despite this, almost always prescribed as the primary ultrasound examination, which allows to safely exclude diseases of solid organs adjacent to the stomach (heart, pancreas, liver, bile ducts, gallbladder), show large defects of the mucous membrane, pathology of blood vessels, muscle spasms, irregular movement of the liquid.

When doing the ultrasound?

Ultrasound is prescribed in all cases when the use of invasive radiological techniques carries the risk of unjustified or contrary to the request of the patient:

1. In case of acute pains in the stomach, as the first stage of a comprehensive survey.

2. During pregnancy, especially in the second and third trimester.

3. For pain in the stomach in a child.

5. At various contraindications for gastroscopy – damage of the esophagus, acute illnesses, heart attack, stroke, aortic aneurysm and so on.

6. In panic fear of the patient before the gastroscopy, the desire to avoid it with the help of ultrasound of the stomach.

In addition, a complete abdominal ultrasound is done just as a regular diagnosis in healthy people, at their request, as well as patients with chronic gastritis, ulcer, pregnant women and newborns in accordance with the planned schedule. The indication for the ultrasound examination can be any symptoms indicating pathological changes in the digestive tract – unexplained nausea, vomiting, frequent pain, heartburn, putrid belching and the like. Young children procedure is done, if they often regurgitate food.

What the ultrasound shows?

With the help of ultrasound can detect:

5. Pathology in the peristalsis of the stomach, gastroesophageal, duodenogastric reflux, gastroparesis, achalasia cardia.

In the differential diagnosis of most diseases associated with the mucosa of the gastrointestinal tract, after the ultrasound would require gastroscopy with collection of material for biopsy.

Ultrasound is a relatively simple procedure for the patient and requires no special training and psychological work before performing. In an emergency you can easily assign urgent examination, however, it shows much less accurate results. If it is planned in advance, it is necessary to take into account and eliminate factors that can reduce effectiveness:

1. The food blocked the view of the rear wall and the pancreas, so does an ultrasound on an empty stomach. The optimal period of abstinence from food for 12-14 hours. For patients who are unable to fast for a long time (suffering from pain on an empty stomach, children, diabetics), it may be reduced to 6 hours, but the dish should be very easy – dried white bread, boiled mashed vegetables, low-fat broth. To drink last time recommended not later than 3 hours before the procedure, and not more than half a Cup of tea.

2. Gases interfere with the passage of ultrasound. 3 days before ultrasound of the stomach must be completely excluded from the diet foods that causes flatulence – fresh vegetables and fruits, legumes, brown bread, cabbage, carbonated beverages, fermented foods, nuts, dairy products, bulk meat, alcohol, sweets. Additionally it is recommended to take antifoaming agents and chelators.

3. Nicotine, especially on an empty stomach, causes spasms of blood vessels and smooth muscle, which may significantly distort the results of the survey. Smoking the day of the procedure is not recommended.

With an ultrasound it is advisable to take 2 liters of pure non-carbonated water.

Description of the procedure

The process requires no additional equipment and drugs, except unit and a water gel. Diagnosis can be done both standing and lying down, but for the study of motor skills is best to start from the supine position. Water gel treat skin above the stomach to completely eliminate the air gap. Specialist presses the acoustic sensor to the stomach, moving and adjusting it as needed.

After examination of digestive glands and lymph nodes, the doctor proceeds to the study of the stomach wall. The ultrasound can clearly distinguish between each layer of fabric and measure some of its parameters. First of all pay attention to the uneven thickness of a layer, indicating inflammatory or erosive processes. The resolution of modern devices will allow you to assess the condition of major blood and lymphatic vessels.

To study the motility of the stomach, the patient is instructed to drink through a straw 0,5-2 liters of water and roll over on its right side. This helps not only to see and appreciate the movement of water through the digestive tract, but also to study the posterior wall of the esophagus, antrum and pyloric divisions of the stomach.

The whole procedure takes less than half an hour. The results are recorded diagnostician and immediately handed for transmission to the attending physician. Modern devices are equipped with video recording system, optionally you can display it on a disk and applied to the history of the disease. 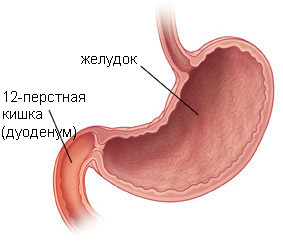